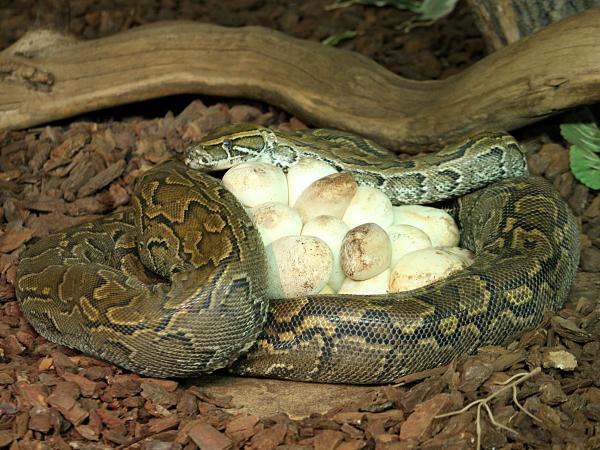 If you’ve ever walked in the woods or even inspected the trees in your backyard closely, you may have stumbled across some bird eggs. Some are plain, some are colorful, but all are oval in shape. But what about our scale-covered friends? What do snake eggs look like?

GIF
Contents
I) Snake Eggs Appearance:
II) Why Do Some Snake Eggs Look Different?
III) Why Are The Eggs Soft?
IV) What Are Snake Eggs Often Mistaken For?
V) Be Careful Inspecting Snake Eggs
VI) Conclusion

Snake eggs are most similar to bird eggs in shape. They are oval but are more symmetrical than something like a chicken egg, which has more of a pointed end like a teardrop.

Snake eggs are very much an oval. Size varies a lot based on species, however. For example, the small hognose snake will lay eggs a little over one inch long while a burmese python will lay eggs that are 4 or 5 inches long!

Egg color will vary slightly, but still have basically the same color. Snake eggs may be white, off-white, or a very light beige.

They are solid in color and if there are spots on the egg, that can actually be mold growing on the outside.

This is where things really start to get interesting. The most common egg that you may see in everyday life is a chicken egg. These will feel smooth though sometimes have a bumpy texture to them.

Snake eggs are very different! Instead of a smooth shell, snake eggs feel more like they have been wrapped in leather! 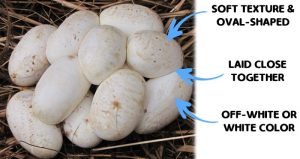 All bird eggs have a hard outer shell, but snakes are unique in this regard. Snake eggshells are not hard, instead they are soft.

If you hold one, they will have a slight squish to them and feel like they are full of fluid.

Why Do Some Snake Eggs Look Different?

There are very few exceptions to the appearance of snake eggs, one being the racer snake, which varies from the normal leathery texture. Racer snake eggs will often have a bumpy texture to the shell, like it was dipped in salt or fine sand, though it is still soft.

The other interesting eggs are those of ovoviviparous snakes. Ovoviviparous means that while the snake does have eggs, they are never laid. Instead, the eggs remain inside the body of the mother to keep them warm.

Common garter snakes, pit vipers, anacondas, and boa constrictors are examples of ovoviviparous snakes. Once the babies have fully developed inside the eggs, they hatch while still inside the mother and then the babies are born.

Similar to ovoviviparous snakes are viviparous snakes, which means they don’t have any eggs at all. What’s interesting about these types of snakes, however, are that the mother doesn’t hold eggs inside them either!

With these snakes, each embryo is in a placenta and the mother gives an actual live birth, since no eggs were involved at all. Some boas are viviparous snakes as well as water snakes.

Why Are The Eggs Soft?

Birds incubate their eggs by sitting on them. The body heat of the mother provides warmth to the eggs. But snakes are different.

Egg laying snakes lay their eggs in various locations including under logs or foliage and in the dirt. All of these locations keep the eggs warm and incubated until hatching.

In fact, most snakes lay their eggs and leave! Some species, certain pythons, for example, will stay and protect the eggs during incubation.

They will lay around the eggs but not on top of them. Of course, ovoviviparous snakes keep the eggs inside their body and are soft shelled as well.

What Are Snake Eggs Often Mistaken For?

But bird eggs have a hard outer shell, and while some are smooth, they can vary widely in texture, color, and size. So if you think you’ve found some bird eggs but they are a little squishy and feel different, they may actually be snake eggs.

The other eggs they are often mistaken for are other reptile eggs. Turtle eggs, for example, can be extremely similar.

They are white, off-white, or beige, they have a leathery texture, and they have an oval shape. They also vary in size based on the turtle.

However, turtle eggs are often smaller because turtles can’t lay large eggs. Also, there is more variety with turtle eggs.

Sometimes they are oval, but other times they are round like a ping pong ball. They can also vary in texture, most of the time they have a soft shell but sometimes the shells are hard like bird eggs.

The amount of eggs that a turtle lays per clutch varies widely, just like with snakes. For example, the red eared slider turtle will lay between 3 and 30 eggs at a time!

Corn snakes will lay between 10 and 30 eggs.

Lizards, such as leopard geckos, bearded dragons, or green anoles, also lay soft eggs with a leathery shell. But these differ from both turtles and snakes in that they lay a very specific amount of eggs.

Leopard geckos will lay two eggs at a time at most, bearded dragons lay right around 20 eggs at a time, and green anoles will only lay one egg at a time.

Interesting READ  Can Female Snakes Lay Eggs Without a Male?

Snake eggs are often laid in the dirt or hidden under different objects. Because of this, sometimes crocodile eggs are mistaken for snake eggs!

They are also buried in the dirt and are similar in size and shape. Just like snake eggs, they are oval with very rounded edges unlike bird eggs that are tapered at one end.

Once the embryo attaches to the egg, a white mark appears in that spot and spreads as the egg matures, eventually leaving the egg entirely white.

Something else that is interesting is that they do have hard shells. Though, if you think you’ve found a crocodile nest, probably best to stay away.

While most snakes and many other reptiles leave the nest right after laying the eggs, crocodiles like to stick around and protect their eggs!

If you get the chance to touch and hold snake eggs, it is a really fascinating experience! But you have to be careful.

If you are removing a snake egg from a natural incubation location, like in dirt, sand, or hidden under foliage, or from an artificial incubator, it is important to put it back very soon after removing it. If you don’t, the developing snake may get too cold and not hatch! 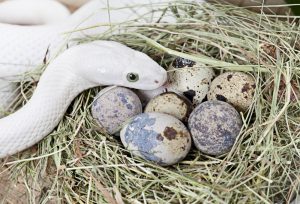 If it is stuck to other eggs in the clutch, that is completely normal. When they are laid, they have an adhesive on the outside so that all the eggs stick together.

If it isn’t easily removable, stop! You don’t want to damage the egg.

Also, it is very important to put the egg back exactly how you found it. While animals like chickens roll their eggs over and rotate them several times per day, snake eggs are very different.

The embryo attaches to the shell in a specific place after being laid, and if they are rotated or turned, it can mean that the baby snake dies! So please be careful if you are inspecting snake eggs.

Snake eggs are very interesting, especially in comparison to other egg laying animals like birds, other reptiles, and even things like fish. While similar to bird eggs, they are soft, are relatively the same color across all species, and have a leathery texture.

Because of their soft shell, they can be very interesting to hold and look at! But pay careful attention to how the eggs were laying before picking them up.

Rotating them or turning them can result in the egg never hatching! When in doubt, leave them be and admire them from a distance.