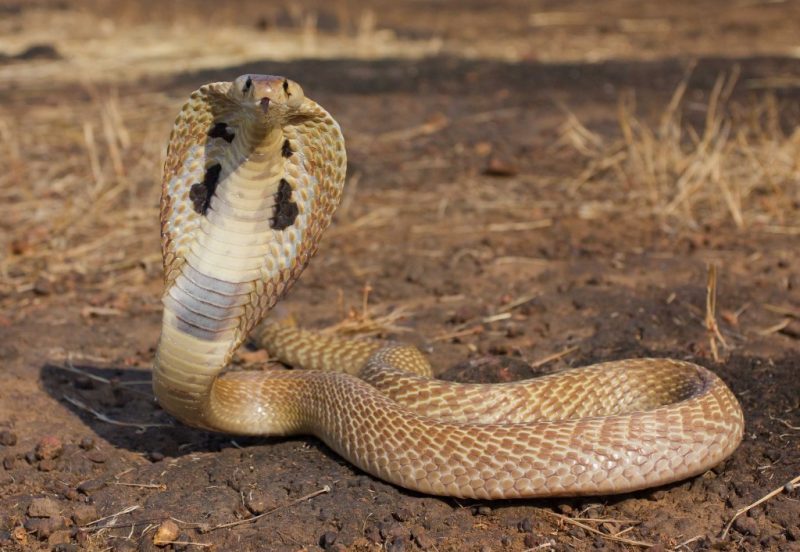 Snakes, like most animals, can show fear towards a variety of stimuli. Unfamiliar or disturbing smells, sights, or other animals can stress out a snake and cause it to flee. In rare instances, these may cause the snake to feel that it must defend itself.

Due to the timid nature of snakes, owners may be wondering how they can bond with their pet without accidentally doing something to scare it. Others may also be wondering how to keep snakes away from their property without being bitten in the process.

In today’s article, we will discuss what can make snakes fearful, as well as how you can protect yourself from confronting a startled snake.

Are Snakes Afraid of Humans?

The short answer is yes. Wild snakes do not want to be anywhere near people.

Many snake species are fairly small compared to the other animals in their environment, and anything larger than them will be perceived as a potential predator. Compared to snakes, humans are incredibly huge, hulking creatures that they will want to avoid at all costs.

Wild snakes do not commonly see people, and the animal’s first instinct upon seeing a human is to run—or rather, slither—away. However, if the snake feels trapped or provoked, it may resort to more drastic methods to keep itself safe.

They May Attack a Human Because of Fear

Often, snakes will turn tail and attempt to hide from any human they come across, but occasionally snakes will feel that biting is their best option to get a person to leave them alone.

A cornered snake with nowhere to hide will especially feel vulnerable, which may make them more prone to attack. That is also how pythons protect themselves.

Patience is key if you are dealing with a snake that has been backed into a place with no visible escape route, and it is best to leave the animal alone and give it time to move somewhere else on its own. Do not try to approach a wild snake without proper training or equipment. If you are worried that the snake may be venomous, call a professional snake handler so that it may be safely relocated.

A snake that is ready to bite will assume a striking position with its head raised above its body. Coiling in this way is usually the snake’s first attempt to make itself look imposing enough to frighten potential predators and humans away. However, if this tactic fails, the snake might resort to biting.

What Are Snakes Afraid of In The wild?

Like all smaller prey animals, snakes want to avoid creatures that are larger than them out of fear that they may be killed and eaten. As we have previously talked about, humans are seen by snakes as large predators, and most snakes will enter flight or fight mode upon encountering people.

However, other big and noisy animals can cause snakes to respond this way as well, whether they are the snake’s natural predators or not.

Interesting READ  Why Is My Ball Python Hissing At Me?

Animals that commonly prey on snakes include:

Snakes will be on the lookout for these animals, but anything larger than them will also give them a startle, even herbivorous or non-threatening organisms such as deer and horses.

Animals That are Immune to Venom

Certain animals that prey on snakes have a built-in tolerance and, in some cases, an outright immunity to the toxins found in venom.

Animals like the mongoose or the secretary bird can take multiple bites from certain venomous snakes without feeling the effects of the toxins. Injecting venom is often the last line of defense that a snake will use to defend itself against an attacker, as it takes a long time to produce venom, and they want to save it for subduing prey.

In any case, where a snake is facing a predator, it will not know whether the assailant is immune. Nonetheless, the serpent does instinctively understand that it cannot always rely on its venomous bite.

Thankfully for humans, this means that when a snake encounters a larger animal—including us—most of the time, the reptile will want to flee and find a safe place to hide rather than fight and become a potential danger to you or others.

Snakes do not have external ears, so no matter how much you yell or make noise, they will not be able to hear you in the way that a dog or cat would. However, snakes can sense the vibrations caused by movement, and any motion-based disturbances to their environment will get their attention.

Drilling, stomping, rustling, moving large objects around, or any intense disruption of the surrounding area will frighten a snake as it will assume that a sizable animal is nearby.

As with many reptiles, snakes have susceptible respiratory systems. Smoke is not a common stimulus that snakes interact within their day-to-day lives either in captivity or the wild, and it will make the animal assume that a forest or brush fire is burning nearby.

The presence of smoke in the snake’s environment will also bother its sensitive smell receptors and lungs, stressing the animal out. This will encourage the snake to move in the opposite direction of the smoke until it cannot sense the strange, overpowering aroma anymore.

Snakes tend to follow their natural prey and sometimes settle in an area with a reliable food source. Mice, rats, and other rodents, and small creatures will attract a snake to your home like a moth to a flame, so it’s a good idea to keep your house rodent and insect-free.

In addition, if you keep rodents, rabbits, birds, or any other sort of small animal as a pet, it is best to house them indoors and not in an outside pen or an open garage. Small prey-sized animals kept near a snake’s natural habitat will only entice them to come closer to your home.

Interesting READ  How Often Should You Feed A Ball Python?

If your home has any open pipes, tubing, or crawl spaces, snakes will be tempted to use these as hideouts. Snakes love small, dark spaces to use as dens where they will feel safe from predators, so it is vital to remove any of these, especially from the external parts of your house, if you want to lessen your chances of finding them and potentially being bitten.

A snake in its den will be much more defensive and prone to biting than a snake out in the open, so reducing the number of crevices in your home for them to occupy will help to keep both you and the animal safe.

When powerful vibrations are not doing the trick, creating fumes that are safe for both you and the snake will help repel the animal. Starting a campfire is a great way to ward away snakes, but if you do not have access to a firepit, simply burning incense is another effective method. Incense scents that use heavy cloves or cinnamon will make a powerful odor.

As we have learned, snakes have very sensitive respiratory tracts. The pungent aroma created by the smoke will be immensely unpleasant, causing the snake to move in the other direction as quickly as possible.

Snakes feel safest when they are hidden, and tall grasses and shrubbery provide the perfect space for them to take shelter during the day while they hunt for prey. Houses located near forests and other wooded areas will especially draw in snakes and may require more maintenance. Cutting the lawn and trimming hedges regularly will help keep wild snakes away from your home as they seek out a place with more undergrowth and foliage.

What Do Snakes Do When They Are Scared?

Upon encountering something distressing, a frightened snake will usually flee the area and hide as its first line of defense. However, snakes will sometimes try to make themselves look intimidating by coiling into a striking position and rearing their head back when that does not work.

Occasionally, snakes will also emit a foul-smelling substance known as musk to try to deter whatever has scared them. Cobras and similar elapid snake species may spread their hoods to make themselves look bigger.

Rattlesnakes might rattle the end of their tails as a warning, and other snake species can mimic this action with their own tails. Hissing and opening the mouth to show fangs is another common way that frightened snakes will try to frighten large predators. In the rarest of instances, though, a cornered snake may resort to biting whatever has frightened it, and humans are no exception to this.

However, by practicing all that we have talked about, you can minimize interactions with wild snakes, or alternatively, you can use these tips to avoid startling your pet snake. On the off chance that you do meet a snake, you can help keep both yourself and the animal safe by keeping these tips in mind.