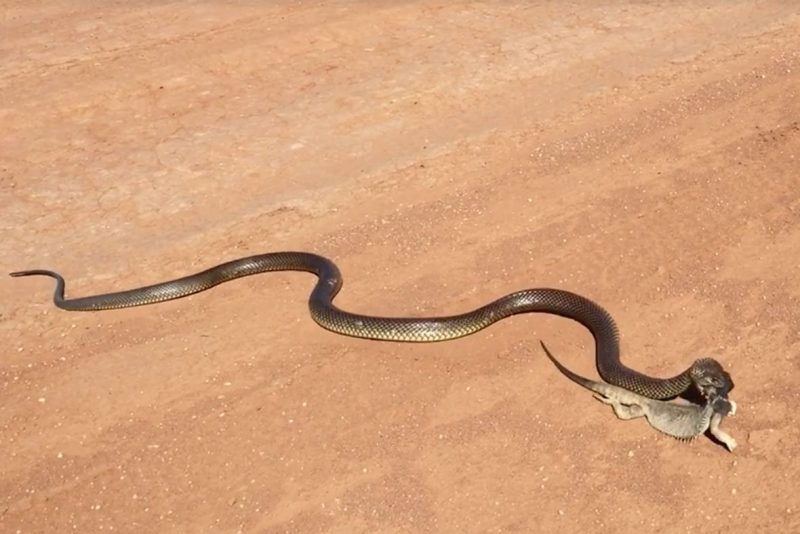 Bearded dragons are amazing reptiles and as their caregiver and owner it may seem difficult to even fathom that these beautiful and sweet creatures have natural predators in the wild, and even in your home. Bearded dragons are native to the hot, arid desert of the Australian outback and are no stranger to the occasional predator that would like them into a quick meal.

This may have you wondering what types of predators bearded dragons would have in the wild and in your home.

Bearded dragons have several natural predators and a few household ones as well. While bearded dragons do have their defense mechanisms they can utilize to increase their chance of survival, birds of prey, several species of snakes and other lizards, foxes, dingoes, and even the ordinary house cat all have the ability to prey on a wild bearded dragon, or your bearded dragon.

If you are the owner of a bearded dragon or several, it is important to know which animals are likely to try to make your bearded dragon into a meal if you aren’t paying attention. By understanding the different types of predators bearded dragons have in the wild, you will be better able to protect your beloved companion from becoming a meal.

You may be thinking why you should have to worry about your bearded dragon being attacked by a predator when he or she is living in your care. Well, if you ever take your bearded dragon outside, own other species of reptiles, own any felines, or any other type of exotic animal (especially if it is a large animal), this information will pertain to you and will help you protect your bearded dragon.

So, let’s take a closer look at the different types of predators that bearded dragons have, not only in the wild but in your own home as well, and how they protect themselves. 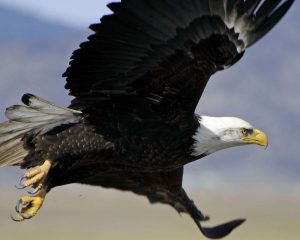 There are several species of birds of prey that live in Australia and have the ability to make a quick meal of the bearded dragon. Birds of prey are any large bird in the “raptor” family, they are strong and quick in flight, have large talons, and strong bills.

These attributes of birds of prey allow them to go undetected by flying high, diving fast, and maneuvering with grace. Their large talons and strong bills give the ability to grab larger prey and tear into their tough flesh with ease.

These abilities make birds of prey one of the most dangerous and successful predators of the bearded dragon. Birds of prey are not just indigenous to Australia; they are all over the world.

If you own a bearded dragon and you take him or her outside frequently, it would be advised that you keep a close eye on him or her and anything flying overhead, as your local birds of prey might just take it upon themselves to turn your beloved pet into an easy meal.

Interesting READ  What Does It Mean When Your Bearded Dragon Falls Asleep on You?

Predator 2: Snakes And Other Lizards

Snakes are a lot like bearded dragons in the sense that they will eat anything that is smaller than they are. There are several species of snakes that reside in the outback in Australia, including the eastern brown snake, death adders, and coral snakes.

Not only are some of the most venomous snakes in the world found in Australia, they are also some of the fastest. In order to catch a bearded dragon, you must be quick, and snakes have the ability to move with an overwhelming amount of speed.

You might not think that a snake could fit its mouth around a bearded dragon, let alone swallow it; well snakes have a unique ability that allows them to consume larger prey. After a snake has delivered its deadly strike and either administered its venom or constricted the prey, they will detach or dislocate their bottom jaw, which can move each side independently of the other, and stretch its mouth around the head of the prey, working the prey through its digestive tract by utilizing its many muscles.

Snakes are not the only thing that bearded dragons must be on the lookout for; there are larger lizards that live in Australia, known as goannas or monitor lizards, which can and will make a bearded dragon into a meal. Goannas are large, fast, and deadly lizards and it would be quite easy for one to catch, kill, and eat a bearded dragon.

While these reptiles may not have you worried if you don’t live in Australia, if you own large snakes or even other bearded dragons, you should be sure to keep everything separate and contained properly so your pets don’t decide to eat each other just because they can.

Dingoes are more likely to be found running in packs, are considered an apex predator, and fear very little in the Australian outback, whereas foxes are smaller and move in families or on their own. They both have strong jaws and sharp teeth, deadly claws, and have quick maneuverability.

Dingoes may not be a native animal in every part of the world, but foxes can be found just about everywhere. It is extremely important to keep your bearded dragon close if you have him or her outside and to never let them be outside on their own. 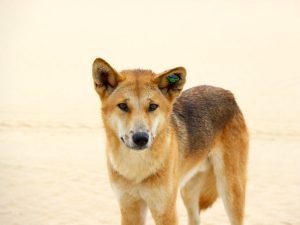 Interesting READ  Can You Put A Bearded Dragon In A Hamster Ball?

Cats are smart and fast with sharp claws and teeth, they have the ability to climb and fit in places most other animals are unable to, making them the ideal form of pest control around your home. If you do own both cats and bearded dragons, it would be advised to ensure that your bearded dragon’s enclosure has a secured lid that your cat cannot easily open or knock off.

If you happen to live in Australia and are growing frustrated with the amount of bearded dragons around your home, a house cat may be the right pet for you.

Bearded dragons have the ability to modify their coloring in order to better blend in with their environment. While it isn’t nearly as noticeable of a change that chameleons have, they can adjust their skin tone to more closely match their surroundings.

In the desert sand they may present themselves as more yellow in tone, whereas in a more rocky area they may be a darker gray and dull looking.

This technique is used to “shield” themselves from predators by appearing to be another part of the landscape.

Bearded dragons also have the ability to inflate their throat, or beard, with air in order to appear larger than they are. In doing so, they raise their spikes around their head to look more menacing than they actually are.

While their spikes are not sharp or dangerous in any way, with their beard inflated and the spikes erect, it causes potential predators to think twice about their meal choice.

Bearded dragons have this interesting and unique ability to detect predators that may come from overhead; they use their third eye. This “eye” is not what you may think; it is more like a sensor that rests at the back of their skull that measures any and all change in light and shadow. For instance, if a bird of prey is coming from above, the shadow that is cast by the bird’s body will pass off the bearded dragon’s third eye, alerting the dragon to a potential threat. This early alert system will allow the bearded dragon ample time to retreat to cover to avoid becoming prey.

When it comes to the outback of Australia, deadly predators are in abundance and the bearded dragon must stay vigilant in order to avoid becoming prey. While bearded dragons are capable of defending themselves, it doesn’t always stop the many natural predators they have, not just in the wild but in your own home as well.

As their owner and caregiver, it will be up to you to provide them with appropriate shelter and safety so they don’t end up as another animal’s meal for the day.

Can Bearded Dragons Drop Their Tails?

Can Bearded Dragons Eat Romaine Lettuce? Is It Good For Them?

How To Cut Bearded Dragon Nails In 3 Steps

Is It Okay For My Bearded Dragon To Sleep In His Water?