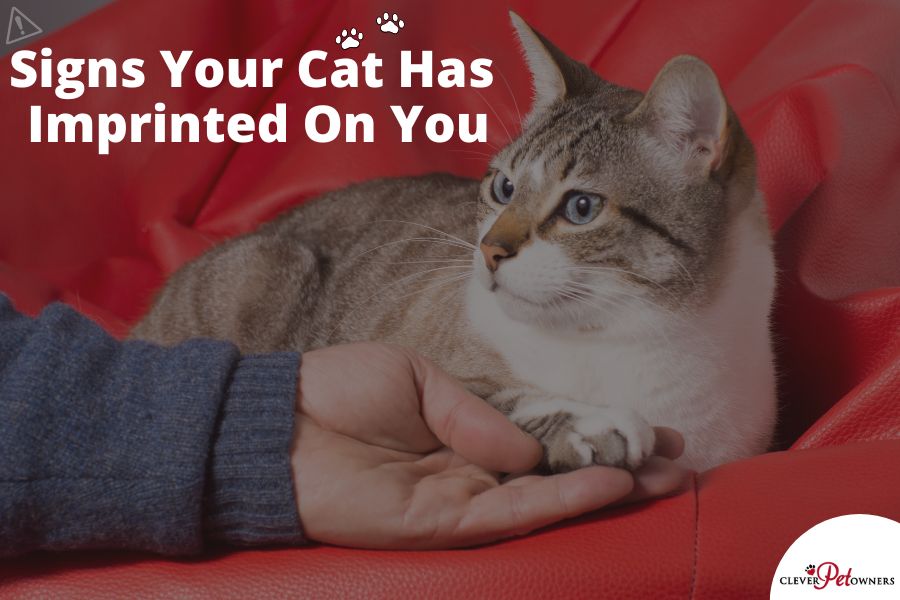 Have you noticed that your cat seeks you out more than everyone else in your house? Is he always following you, purring, and asking for pets? Are you curious about whether or not your cat has imprinted on you?

Imprinting is a behavior many baby animals have developed to attach to their parents to survive infancy.

However, cats have been known to imprint on humans, showing an obvious preference for one person above others.

Contents
I) How to know your cat has imprinted on you? (9 signs)
II) Why do cats choose certain people to imprint on?
III) Can cats imprint on a second person?
IV) Final thoughts

How to know your cat has imprinted on you? (9 signs)

It may be slightly frustrating if your cat is constantly underfoot, but this is a sign that he may have imprinted on you.

Kittens follow their mothers around; this is how they learn about the world and observe how to be a cat.

If your cat is following you around, this shows he treats you as a mother figure. This is a deep connection of trust.

He wants to be where you are and is learning your daily routine and fitting himself into it.

Sign 2: You sometimes have staring contests with your cat.

You look over, and your cat gives you a deep, loving stare. He blinks slowly. It’s really intense but also sweet.

Scientists have studied how cats blink. When a cat initiates one of these deep, slow blinks, it intentionally closes its eyelids gradually.

They are using this gesture as a means of communication. Slow blinking is a way for your cat to get your attention. It also shows confidence and happiness.

Viral video songs aside, you really do have a cat on your lap, constantly. This is another sign your cat has imprinted on you.

Cats have higher body temperatures than humans, and it takes more energy to maintain those temperatures. Your lap is one of the warmest and safest places for a cat on your body.

Also, cats enjoy soft fabrics like our clothes or lap blankets. This is an extremely close position with a human, so if your cat loves laying on your lap, it’s probably not only about the body heat and plushy fabric.

Lying on your lap is a sure sign of trust and commitment to you.

Cats used kneading during kittenhood to express milk from their mother. This action is ingrained in cats as a comforting, bonding experience.

So, if they are kneading on you or near you, this is probably a sign of imprinting. Some cats will even mimic nursing by suckling on the fabric of a blanket or nearby pillow.

Suckling behaviors are not a sign of concern. It reminds the cat of their mothers–a time when they were completely safe and comfortable.

You inspire that feeling in your cat, which is why he’s imprinted on you.

Your cat has taken up residence in your bed. He’s sleeping at your feet or on your chest. He’s become your little furry blanket.

Interesting READ  My Cat Has Worms - How Do I Clean My House?

This adorable behavior is another sign that your cat has imprinted on you.

A cat is independent. They don’t need the approval of humans like dogs do. They see themselves as autonomous, and some scientists even suggest that they are only partially domesticated.

So, if a cat chooses to be in your presence, this is the ultimate compliment. They don’t need you, but they want to be near you.

Sign 6: You are the only one allowed to give belly rubs.

You know the trick. A cat rolls over, exposing a super soft underbelly.

It is the best-laid trap, usually resulting in some teeth or claws to the gullible hand. Yet, your cat lets you pet his belly freely.

The underbelly of the cat is its most vulnerable spot. Cats don’t usually expose this; it would be deadly in the presence of a predator.

However, you will sometimes see kittens playing with their littermates, rolling over to expose their tummies.

Even adult cats can play around like this. Your cat may show his belly to other humans, but if he’s letting you go the extra step and rub his belly–you have been chosen.

Your cat may be meowing only for you. Cats actually developed verbal communication to interact with humans.

Kittens meow at their mothers to get their attention. This is the same reason they meow at us.

Studies show that feral cats tend to outgrow this habit, but domesticated cats do not.

Although meowing often means your cat wants something, cats have several different meow sounds to express their needs.

For example, short meows signify hello and a chirrup, a mix between a purr and meow, which is how mother cats call their kittens.

This shows that the cat shares that same mother-kitten bond characteristic of imprinting.

Some studies suggest cats tend to gravitate toward one person because they communicate better with their cat.

Finding a mouse or vole on your stoop may not be exciting, but your cat is giving you a gift of love.

A mother cat would bring her weaning kittens fresh meat. Cats are predatory by nature and extremely adept at hunting.

So, when your cat leaves you a dead little gift, he’s providing for you. The cat probably sees you as weak, like a kitten, and unable to hunt for yourself.

Many people worry that the bonds their pets show are food driven, but this behavior shows that the cat is intentionally trying to provide for you.

He could get his own food, but he has chosen to help you.

Cats groom themselves and others. It shows that the cat is at ease. Lately, however, your cat has not only been licking himself but he’s been trying to groom you.

Grooming is another way for your cat to show how much they trust you.

Cats see humans as equals, not as other cats or as masters, so they treat us in ways they would treat their equals–other cats.

So, if your cat licks your fingers (or toes), this probably means they adore you. Also, returning the favor by brushing your cat is a way to return the affection.

Why do cats choose certain people to imprint on?

Many animals, including humans, cats, dogs, and owls, are called altricial species. When they are born, they are still too weak to survive on their own.

They need the help of caregivers. This can be their mother or a mother-like substitute.

The act of imprinting is when a kitten bonds with the first animal it sees after birth. This behavior can be transferred to humans because cats see them as surrogate mothers.

Imprinting encourages kittens to follow their mothers to learn how to be a cat. It is also important for their safety.

Imprinting can also influence a kitten’s behaviors and attitude.

This test involves having the cat in a room with its owner. Then, the owner leaves. Finally, the owner returns. The scientists measure the stress of the cat at each stage. They discovered that cats form complex attachment bonds.

Cats with secure attachments were less stressed with their owners in the room. However, some cats had not formed these bonds with their humans.

Even after socialization training, the cats who had not formed these bonds had not changed their behaviors, while cats who had stayed secure in their attachment remained so.

Certain breeds seem to attach to one human more than others.

However, many mixed-breed cats also select one human to become attached to. They have imprinted on this human, and he or she is their whole world.

This can cause the cat to get jealous of other pets or people giving their human attention, and if that person dies, they can become depressed.

Can cats imprint on a second person?

If a cat is rehomed or the owner dies, a cat who has imprinted on its owner will feel a range of emotions.

He will be stressed, upset, and lonely. You can see this with bonded pairs when one of them is separated.

The cat will call out for its owner and sometimes get extremely depressed. Based on certain studies, cats can remember things for up to 10 years, so they will still remember their owner.

Younger cats adapt to these changes easier and can be happy in a new home after a time, but older cats may never fully get over their previous owner.

Remember that imprinting usually happens at birth between the mother and the child.

If you are your cat’s surrogate mother, they may still love and trust other family members, but you are their main human.

If your cat is showing many of these signs, he has probably imprinted on you. This is a special bond to share with a cat.

There is nothing quite like being a cat’s number one. They completely trust and adore you, and those feelings are absolutely mutual.

How To Stop My Cat From Eating The Fake Christmas Tree? (5 tips!)

How Do Cats Play With Humans? Understand Their Actions