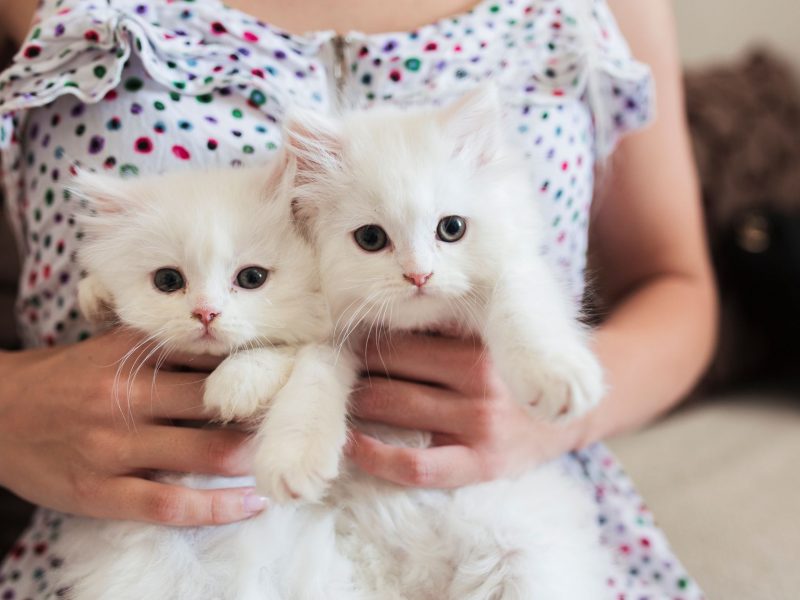 Deciding to get a cat is an exciting one! To have a furry friend come live with you leads to many happy moments and memories.

Then you get down to the shelter and you have all these beautiful kitties to choose from. It’s hard to pick the perfect cat for your home.

Then you think you want two kittens, now what? Oftentimes, there are multiple kittens from the same litter. This brings about another thing to consider.

Getting a cat comes with a lot of decisions. With the selection of foods to choose from, toys, litter boxes, scratching posts, beds, and more!

If you end up surfing the web you might be sucked further down that rabbit hole. With all the products out there to buy for your potential furbaby, you forget to think about the most important thing: the cat!

Usually, people like to go down to the shelter to see which cat draws their interest. However, what should you do if you want to get two kittens?

Should you just pick two cats that you seem to mesh with? Or is it better to get two kittens from the same litter?

Advantages Of Getting Multiple Kittens From The Same Litter:

Some adoption agencies will require you to adopt two siblings because of their strong bond. The transition for a kitten to come from a shelter to a home is a stressful one for both the cat and its owner.

The stress is amplified when they are put in a home with a cat that they aren’t familiar with. It can result in a general unhappy environment for both kittens that can lead to anxiety and depression if they aren’t transitioned properly.

Adopting siblings eliminates the stress of having to have that play out in your home for two cats that don’t know each other.

Disadvantages Of Getting Multiple Kittens From The Same Litter:

Even though there are lots of benefits to getting two cats that are of the same litter, it isn’t always the case. Unfortunately, some cats do not get along with their siblings.

In those cases, getting two kittens will cause lots of stress in your home for both cats and yourself! Another possible disadvantage of getting two siblings is if one has health issues, it’s possible that the other shares the same issue.

Interesting READ  How Long Does A Cat Hold A Grudge?

This can be hard to have to go through as an owner, and sometimes expensive to treat. Similarly, it’s possible that two siblings share the same behavioral issues as well.

Issues like aggression may be found in multiple cats of the same litter, although it’s not always the case.

Should I Get Two Cats Rather Than One?

The sibling aspect aside, are two cats a good idea? Should you get two cats rather than just one?

The good thing about cats is that they don’t need to be in a group or pack to be happy. It’s possible for you to adopt just one cat that lives a happy, healthy life.

Some cats prefer to be the “only child” in a home and bringing another cat in can disturb the peace. Here are some pros and cons of having two cats.

If you find that you aren’t home often, this can lead your cat to be lonely and in need of some companionship. Getting another cat can give your cat some company while you’re away.

Getting two cats will reduce the number of times your cat will get bored. Having just one cat be difficult at times and you may find that they will want to play at times that you are busy.

When they have a friend to play with, they won’t be bugging you to play with them as much and you can get things done and at the same time, your cat will be happy!

Having two cats can help with stressful situations. There are times when your cat will be stressed due to a change in its environment.

A change in environment can be anything from a new baby in the house or a recent move. Whatever the change may be, if your cat is stressed, having a friend can help reduce the stress and help them to assimilate to the change.

A great thing about having two cats is that training gets easier with two. It doesn’t sound like training two cats can be easier than one, but it actually helps!

When there are two cats, it’s easy for the other to catch on when one cat is doing the right thing!

Having two cats means all the expenses you would normally have for one cat, like food, toys, litter, and vet trips are doubled! Having one pet can be pricey, let alone two. When deciding if two cats are right for you, you need to consider your budget and if you can afford all the expenses that come with having two furry friends!

When getting two cats you need to be prepared for fighting! Even cats that get along well are still bound to fight every once and awhile. Conflicts can arise for many different reasons and it can be stressful to get things back on track.

Cats love to knock things off of counters and just make a mess! Two cats mean two curious kitties getting into trouble and putting their paws where they don’t belong. If you’re not a fan of cleaning your cat’s box, two cats will have you running for the hills!

Getting Two Cats To Meet

Whether you’re getting two cats and need them to meet or you already have a cat and want to add a new kitty to your home, you’ll need a plan. Just putting two cats together and expecting them to get along from the get-go, is unrealistic and won’t happen.

Doing so may make your cat act hostile to your new cat and make your new cat feel stressed and anxious. Or if you just got two new cats and bring them home without a proper introduction it can also cause a conflict.

Whatever your situation may be, it’s important to go about it tactfully. Here is how to get two cats to meet!

When you get a new cat, they need some time to adjust to their new environment, the last thing you want to do is force the cats together to meet. This will stress your cat out and it may take longer for them to take to each other.

Let your new cat or cats smell their environment! This is very important. Cats can tell a lot about things by smelling them. It’s a very important sense that they have and they use it to discover more about their surroundings.

If you have two cats you will want to give each of them their own space, ideally their own room. This will make them feel more secure and when they are ready, they will start to explore their new home. You can give them a time period where they are allowed to roam around the house. Make sure to keep the one that isn’t roaming in their own room to avoid the cats from meeting.

Place both cats in their carrier and let them meet each other by facing them towards each other. If you just got one new cat, place that one in the carrier. You can let your resident cat smell the new cat and their carrier. Let them meet this way a few times a day to get them comfortable with each other.

If everything is going smoothly and the cats are showing that they are getting along, you can leave their room door open so they can roam the house. This time, keep both room doors open so both cats can meet each other.

Watching over them while they are doing this is important to make sure that no fights arise. You can still keep cats in separate rooms when you are away or at night to make sure that they don’t fight until they are completely comfortable with each other.

Getting a cat is a special experience involving years of bonding and love that remains with you forever. Getting two cats is double the experience!

When getting cats there are lots to decide and one of them could be getting one cat or two. Whether or not you should get two cats of the same litter crosses the mind.

Not surprisingly, cats that are from the same litter typically get along better and quicker than those that aren’t related. Getting two cats of the same litter is a good idea but with everything it has pros and cons that should be considered.

The same is true with getting two cats in general. If you decide to get two cats, siblings or not, you need to follow a plan to ensure things go the way they should.

Adopting two cats might have some disadvantages, but any cat owner will tell you the pros definitely outweigh the cons!

Why Do Cats Flop On Their Side? (4 reasons!)

How Often Do Cats Throw Up Hairballs? (5 Tips to prevent excessive hairballs)

Why Is My Cat So Obsessed With Me? 9 Signs To Take Note!

Why Does My Pregnant Cat Keep Meowing? (3 reasons!)