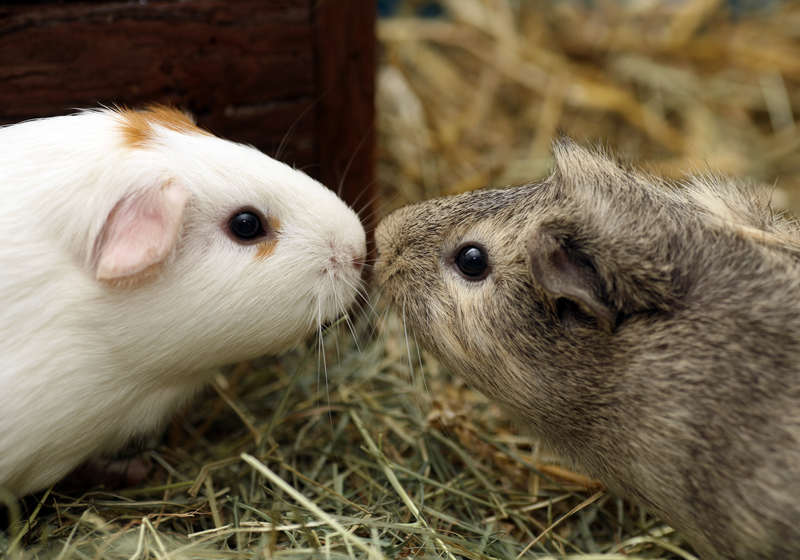 Many pet owners wonder if guinea pigs should be in pairs. There’s a lot to consider when purchasing piggy pals.

You should totally get a second guinea pig because they are social, prey animals that can become depressed if they are left alone.

Guinea pigs thrive when they get to communicate with their own kind and can become prone to respiratory illnesses if they feel lonely.

Keep reading to learn all of the important information about creating a comfortable environment for your piggies.

Is it Better to Have One or Two Guinea Pigs?

Guinea pigs require interaction with their species to live long and happy lives.

A lonely guinea pig can become depressed and lethargic, and guinea pigs in these conditions may act more nervous and uncomfortable around their owners.

Many people may believe that by spending lots of time with their guinea pig, they can prevent it from becoming depressed.

For a guinea pig, human friendship is not a substitute for friendship with a member of their own species.

Getting a friend for a guinea pig is beneficial for the owner as well as the pig because a pig with a friend is more likely to feel confident around its owner.

A guinea pig’s prey instincts are responsible for detecting danger when it is without companionship from other piggies.

Finding itself alone, a guinea pig may not be able to relax and can identify its home as a high-stress environment.

Guinea pigs who become depressed can develop a weakened immune system from stress.

We should avoid a weakened immune system in guinea pigs at all costs as it can lead to an increased risk of upper respiratory disease and mites.

It may seem exaggerated to say that companionship is a matter of life and death for a guinea pig, but a friend is required for an animal that prefers to live in herds.

Piggy loneliness is so dangerous that in Switzerland, it is illegal to own just one guinea pig. This law proves just how detrimental a solitary life can be for a bit of cavy.

There are increased but inevitable extra costs to owning two guinea pigs.

Apart from needing a bigger cage, you will also need to consider the additional costs of more frequent bedding changes and more frequent feeding times.

Many guinea pig owners worry about the cost of owning two guinea pigs compared to one.

However, purchasing extra timothy hay and vegetables is a minimal price to pay in contrast with the expense of taking a guinea pig to an exotic vet for an illness incurred by stress.

Pet owners may also worry about an increase in cage cleaning from owning two cavies.

Whether you have one or two guinea pigs, it is essential to spot clean their cage daily during feedings and completely swap the litter every three days to ensure a healthy environment.

A clean environment is necessary to avoid respiratory illnesses, which can be deadly for guinea pigs.

Keeping a guinea pig is an investment of time and money that may not be suited, as many might believe, to first-time pet owners.

Guinea pigs are fragile animals that require a lot of care and affection from both their humans and their piggy friends to live contentedly.

Is it Better to Have Two Male or Two Female Guinea Pigs?

It is easiest to purchase two guinea pigs of the same gender to avoid having to spay or neuter one of the pets.

Spaying and neutering can be extremely stressful for these small animals, and the healing process can come with difficulties, so finding friends of the same gender is ideal.

Pet owners cannot go wrong with purchasing either male or female guinea pigs, and either gender can make great friends with their humans and with each other.

It is notable that male guinea pigs are easier to introduce before six months of age.

There are minimal differences in choosing boys over girls. Male guinea pigs tend to be a little more comfortable with their human friends, but every guinea pig will have their own very distinct personality.

Guinea pigs have a broad range of curiosity for people, and some may always prefer to have less interaction with humans and more with their own kind.

Having two piggies will allow them to feel more comfortable sharing their unique characteristics with their pet owners.

Whether a new piggy parent is purchasing two males or two females, the most challenging task is finding two piggies who will get along.

Introducing guinea pigs to each other must always be done with caution and care regardless of gender.

Can You Have Two Guinea Pigs in the Same Cage?

Finding two guinea pigs who want to be best friends can be challenging.

When introducing a new guinea pig to an older guinea pig or a herd, it is crucial to allow at least two weeks of quarantine for the new member.

This quarantine period should take place in a separate room and is necessary to avoid transmitting any illnesses that the new pet may carry without obvious signs.

It is best to start the process of cohabitation by placing the two piggies in a space where they can see and smell each other but do not have complete access to each other.

This strategy can help to transition them with less stress.

For their first official interaction, make sure that you have a large, open space where both guinea pigs are unfamiliar.

This space should be filled with lots of timothy hay and veggies to distract their attention from each other.

Do not place any guinea pig hides in the introduction space, which does not have two exits.

This bickering sound is a way of asserting dominance and a necessary guinea pig hierarchy.

Chasing and mounting are also typical upon introductions. Monitor the chasing to make sure that there is no hair-pulling or nipping between your two pets.

Be wary of teeth chattering, and if the situation escalates, separate your pets using aboard. Never come between two fighting guinea pigs.

Not all guinea pigs will become friends but following these steps will be the best way to grow their relationship and merge them into one cage.

How Big Does a Cage Have to Be for Two Guinea Pigs?

Guinea pigs like to have a lot of space to run and need places for their hides and hay. These necessities can take up a lot of room in a piggy’s cage.

If a guinea pig is temporarily housed alone, it must have 7.5 square feet to be comfortable. It is suggested that two guinea pigs have around 10.5 square feet of cage space to roam in.

If necessary, they can live in an area as small as 7.5 square feet, but a smaller cage can cause conflicts between the guinea pigs, especially as they grow older.

It is safer to obtain a cage on the higher end of the scale if you are purchasing two boars (male guinea pigs) because they are more likely to be territorial of their space.

Territorial behaviors can also be present in sows and are dependent on the personality of your piggy.

These behaviors are reduced in guinea pigs with a good relationship but are unlikely to be eliminated entirely.

Pet stores will often sell cages smaller than 7.5 square feet, but this does not mean that they are safe options for your pets.

The price of smaller pet store cages might be tempting, but they will only lead to stress and fighting between your cavies.

The necessary cage size for your pet is best obtained by creating a C&C cage, cubes, and coroplast cage, from scratch.

These cages are ideal for achieving an environment for guinea pigs that suits the designated space in the pet owner’s home.

Do You Need to Have Two Guinea Pigs?

Guinea pigs are social animals that require companionship from their own species. Prospective piggy owners must understand the necessity of owning two guinea pigs and be aware of the dangers of owning only one.

All pets have important needs that must be fulfilled, and guinea pigs require companionship and around 10.5 square feet of cage space to prosper.

Before purchasing a piggy companion for yourself, make sure it has a friend to live its life with.

It is also advisable to research the cost of necessary guinea pig staples like timothy hay, veggies, hides, and cages before investing in little fluffy friends.

Guinea pigs can be wonderful little pets, but they are not for the inexperienced, and they require attention from their own kind and lots of space.

It is vital to appreciate these needs and recognize that they are not so different from our own.

When To Separate Male Guinea Pigs From Their Mother?