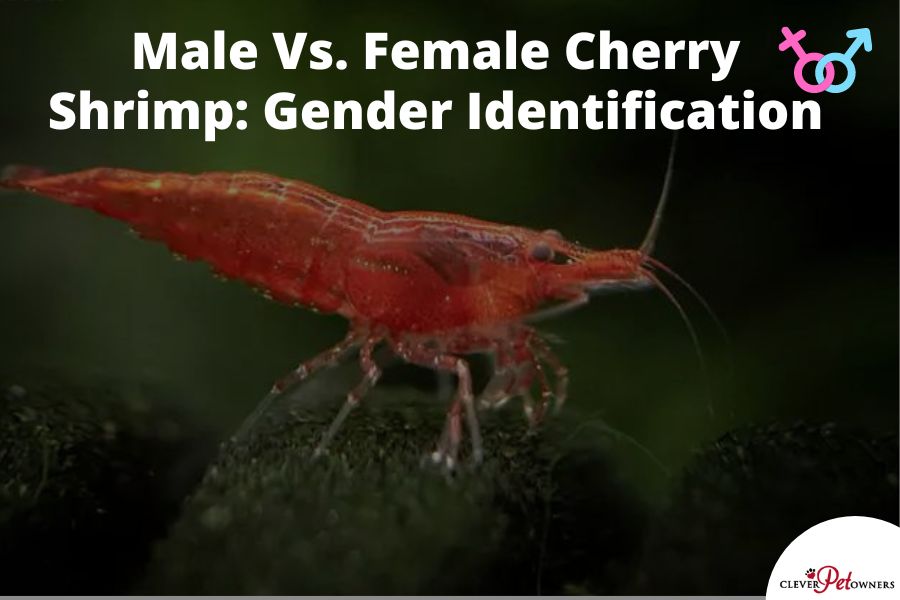 Caring for shrimp can be an enjoyable experience as you can watch their life cycles unfold. If you are interested in the breeding process, you may find it helpful to be able to distinguish your shrimp by their gender.

In a process sometimes referred to as sexing your shrimp, you can identify the gender of your cherry shrimp by observing their physical characteristics for several traits that vary by gender.

Read on to learn more about why knowing the gender of your shrimp can be important and to find our top list of specific traits you can look for to determine if your cherry shrimp are male or female.

Before determining your shrimp’s gender

Although shrimp begin to show signs of their sexual dimorphism at the time of their hatching, these signs are only visible to biologists with special magnifying equipment because they are very tiny and underdeveloped.

In order to see the physical characteristics of your shrimp that will allow you to determine their gender correctly, you will need to wait for your shrimp to be approximately two months old.

At this age, the shrimp are beginning to mature enough for their physical differences to be visible to the naked eye.

This is also around the time when cherry shrimp reach the age of sexual maturity.

Many of the physical and behavioral differences between sexes that we will discuss are related to the reproductive capabilities of your shrimp. Therefore they are not visible in the shrimp’s juvenile state.

How to identify the gender of your cherry shrimp

To identify the gender of your shrimp, you will need to observe your shrimp for the following physical and behavioral characteristics.

Some of these methods are more reliable than others and may also have varying difficulty levels.

If you cannot determine your shrimp’s gender based on one of the signs below, simply move on to the next one.

Ultimately, you can decide if your shrimp shows more female or male characteristics overall.

Cherry shrimp and most other aquarium shrimp belong to a genus of dwarf shrimp known as Neocaridina.

All species of Neocaridina, including cherry shrimp, are sexually dimorphous in terms of their overall size.

Female cherry shrimp tend to be larger than male cherry shrimp. The larger body size found in females allows them to carry many eggs and ingest more food to nourish them. Many females reach up to 1.5 inches in length, while males rarely measure one full inch long.

This method is fairly reliable for determining the gender of your shrimp, but only if your shrimp are of similar ages. Otherwise, you could mistake a juvenile female for a male if you base your guess on this factor alone.

Your cherry shrimp will likely show differences in behavior that can be attributed to their gender. There are also noticeable differences in the mating process.

Overall, male shrimp tend to be more erratic or energetic than female shrimp. Even under adequate conditions, male shrimp are more likely to fight with other tank mates and swim around often.

During the mating process, the male mounts itself underneath the female’s body, near the area where she fans eggs.

The male deposits spermatophore on the underside of the female’s tail, fertilizing the eggs when they are released.

If you can observe the mating process, then this method of telling your shrimp’s gender is highly accurate.

However, other factors, such as disease, can affect the other shrimp behaviors we discussed. We recommend pairing behavioral observation of your shrimp with another method.

The presence of saddle markings on the back of your shrimp can also reveal your shrimp’s gender.

These saddle markings show up as patches of a yellow-green color on your shrimp’s back that may vary in appearance between shrimp but typically resembles the shape of a saddle, giving this trait its name.

Female cherry shrimp will have this saddle marking while males do not.

This is because the color that is visible is caused by the presence of stored, unfertilized eggs. These eggs have a bright yellow-green hue that can shine through the red shell of your shrimp.

This is a highly reliable method for determining the gender of your shrimp because only female shrimp have saddles.

This method can sometimes become more complicated if you do not have ideal lighting conditions that allow you to see the coloration on your shrimp clearly.

As mentioned in a couple of the earlier sections, only female shrimp have eggs. Therefore, any shrimp that is berried or has eggs along the underside of its abdomen is definitely a female.

The term ‘berried’ is used among the shrimp-keeping community in reference to the appearance of the eggs.

This is a fairly reliable method to determine your shrimp’s gender. If you see a shrimp that is berried, it is definitely female. However, it is important to keep in mind that female shrimp are not berried all of the time.

Cherry shrimp also show a difference in abdominal shape between males and females.

While female shrimp have bellies that are more rounded and make a slow curve up towards their tails, male shrimp have thinner abdomens. Some describe the slope that a male shrimp’s abdomen makes towards its tail as being triangular in shape.

This is a highly reliable method to determine your shrimp’s gender as long as you know they are adults because this difference is always present.

You may also be able to tell your shrimp apart by the color of their shells. Among cherry shrimp, females are more vibrant and bright in color than males, who have more translucent shells.

Interesting READ  Why Are My Shrimp Dying? (5 reasons!)

Although this gendered difference exists, it’s important to note that other things can affect shell color, including water quality and the quality of light in your aquarium. We recommend pairing this with another method.

One final difference between male and female shrimp is the length of their antennae. Cherry shrimp have many sets of antennae, only one of which vary in length by gender.

This method is considered an expert method; it is not the easiest option to tell the gender of your shrimp if you are a new shrimp keeper. We recommend basing your decision on other factors and then noticing this difference for yourself!

Why learn your shrimp’s gender?

Whether you tend to encourage breeding, prevent it, or just let your shrimp do their own thing, being able to distinguish your cherry shrimp by gender is a helpful tool.

Some shrimp owners that enjoy a more involved approach to breeding separate their shrimp by gender throughout this process. Keeping your shrimp separate allows you to prevent breeding and then encourage it at specific times upon reintroduction.

When separating shrimp by gender, there are also other essential things to keep in mind besides reproduction. For example, some dangerous potential complications can occur in all-male tanks that we will discussed earlier.

For this reason, some shrimp keepers prefer to only isolate female shrimp that are actively berried. This keeps them away from any stressors in the main tank and newly-hatched shrimp away from potential predators.

Learning the physical and behavioral differences between your shrimp of different genders can also be an important tool for observing the general health of your shrimp population.

By knowing the physical traits of your cherry shrimp which can vary by gender, you are less likely to misdiagnose a disease or illness. You will also be more aware of what stage of life your shrimp are in.

Determining your shrimp’s gender can also allow you to avoid tank problems associated with an abundance of male shrimp.

When male shrimp outnumber the amount of female shrimp in a tank, the male shrimp become prone to aggression and fighting.

This can also lead to other problems such as food competition and bullying. All of these factors tend to result in shrimp deaths, so it is crucial to properly determine the sex of your shrimp and add more females to your tank when necessary.

Some shrimp keepers report that an all-male tank does not have these aggression issues because there are no females to fight over. However, other reports can be found that mention an abundance of fighting even in male-only tanks.