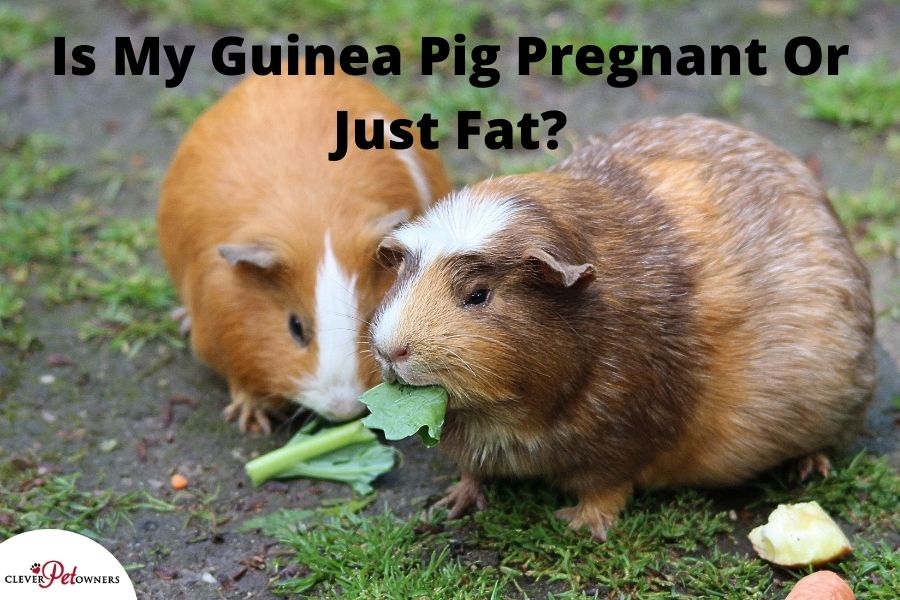 Distinguishing between pregnancy and obesity can be tricky with guinea pigs. It is not uncommon for guinea pig owners to suddenly notice a new litter of guinea pig pups without ever having picked up on the pregnancy beforehand.

The quickest way to differentiate between pregnancy and obesity is by appearance. If your guinea pig is pregnant, she will gain weight around her pelvis and have a lightbulb silhouette, whereas an overweight guinea pig will become larger all around.

There are also many other key differences in the behavior and appearance of pregnant and overweight guinea pigs that will confirm what is causing your guinea pig to gain weight.

Read on to see how to distinguish between a pregnant and fat guinea pig and how to care for them.

How To Tell If Your Guinea Pig is Pregnant

A good indicator that your guinea pig is pregnant is if they have had any recent interactions with males.

Guinea pigs are highly sexually active, even from a young age, so they are likely to breed when they are around males.

Another sign of pregnancy is if your guinea pig suddenly displays wariness towards you, particularly when being held.

A pregnant guinea pig may also start nesting and will want more distance between itself and other guinea pigs.

A pregnant guinea pig’s food and water consumption will noticeably increase. Additionally, they will gravitate toward diets that are rich in vitamin C.

Though both pregnant and overweight guinea pigs can have an increased appetite, only pregnant guinea pigs will favor a vitamin C rich diet.

The specific foods included in your guinea pig’s diet can also be a factor in degerming pregnancy or obesity.

When a guinea pig is pregnant, the pelvis will widen drastically.

This will result in a light bulb-shaped silhouette when you view your guinea pig from the top down. Their stomach will also become rounder and firmer.

If your guinea pig is noticeably wider at the hips, this is a definite sign of pregnancy, as this particular change in shape will only occur when a guinea pig is pregnant.

However, guinea pigs can have pseudopregnancy, which will cause their nipples to react this way despite the fact that they are not actually pregnant.

If you feel any movement inside of your guinea pig when holding her, those are likely babies moving around inside.

The babies may also feel like small lumps, but it is possible to mistake internal organs for babies or for the lumps to be a symptom of something other than pregnancy.

If you feel lumps but not any movement, you should take your guinea pig to the vet, as these lumps may result from something potentially harmful, such as an abscess, a tumor, a cyst, or fatty lipomas.

If you decide to feel for babies inside of your guinea pig at home, be very delicate and use only one hand, as overhandling could result in a miscarriage.

It is best to let a vet hold your guinea pig to feel for lumps or movement of babies, as they will know the best way to handle your guinea pig and can confirm if the lumps are, in fact, babies.

3 Signs That Your Guinea Pig is Just Fat

A good indicator that your guinea pig is overweight and not pregnant is if their amount of physical activity, socialization, or vocalization is noticeably lower than normal.

Overweight guinea pigs will also struggle with movement. They will move slower than usual or may have difficulty moving in general.

Additionally, their flexibility will be lessened, and they will struggle to stretch, affecting their ability to groom themselves.

Due to issues with movement and flexibility, overweight guinea pigs will struggle to clean themselves, especially around their legs and groin area.

If your guinea pig struggles to get its nose in between its legs, it is likely overweight.

A decline in proper hygiene will leave your guinea pig prone to certain diseases, such as flystrike or urine scalding.

Additionally, the excess weight can cause strain on the heart and lungs, as well as the joints, which can lead to arthritis.

Change in Appearance and Feel

Overweight guinea pigs will have a potato-like shape instead of a lightbulb silhouette.

Unlike pregnant guinea pigs, who show most of their physical changes in their pelvic area, overweight guinea pigs will simply appear larger all around.

How your guinea pig feels when you are holding them can also help differentiate between pregnancy and obesity.

When holding an overweight guinea pig, you will struggle to feel its ribs or spine. In more extreme cases, you may not be able to feel their ribs or spine at all.

Overweight guinea pigs will have more patches of fat on their body, which can cause their tummies to sag and will make it difficult to feel or see their hips, ribs, and spine.

These can develop particularly around their groin and legs, which will lead to difficulties with grooming and hygiene. Increased fat around the legs will cause their feet to be less visible.

Interesting READ  Can One Guinea Pig Live Alone? How To Keep It Happy?

Caring For Your Pregnant Guinea Pig

Make an appointment with a vet.

A vet will be able to confirm the pregnancy. They can also provide x-rays and ultrasounds for your pregnant guinea pig.

Even if your vet determines that your guinea pig is not pregnant, they will be able to properly diagnose what is actually happening to your guinea pig, as well as tell you how to care for them and what steps you should take next.

Pregnant guinea pigs need to be given special food and water. Be sure to change and refill the water daily, so it stays fresh.

Feed your pregnant guinea pig high-quality pellets and vitamin C rich foods, such as fruit, grass hay, and leafy greens. You can also give them lucerne hay for protein.

It is essential to remove any boars from the enclosure of your pregnant guinea pig, as boars may continue to attempt to mount the pregnant sow.

This can result in stress and pain, especially in the later stages of pregnancy. Additionally, removing any boars will prevent pregnancy from occurring to any other guinea pig sows you own.

Pregnant guinea pigs can be kept with other sows if she gets along well with them. Guinea pigs are social animals, so it is good for them to be kept in groups during pregnancy.

Just be sure to leave the pregnant sow in the enclosure she is currently in. Additionally, it is good to keep multiple pregnant sows separate from each other.

Next Steps For an Overweight Guinea Pig

For overweight pigs, avoid starving them, as that will not help them lose weight.

Instead, it is best to gradually change the kind of food your guinea pig receives. Limit their consumption of pellets and avoid high starch foods.

Be sure to avoid alfalfa, as that is high in calories. Produce rich in vitamin C can also help overweight guinea pigs lose weight.

You can also give them more room in their cage to run around or provide toys and obstacles to encourage physical activity.

When in doubt, a vet will be able to confirm pregnancy or obesity, as well as provide next steps and proper care.

A visit to the vet will also give you the confidence you need moving forward, as you will be able to give your guinea pig the best care you can by using the knowledge from this article and your vet.

When To Separate Male Guinea Pigs From Their Mother?