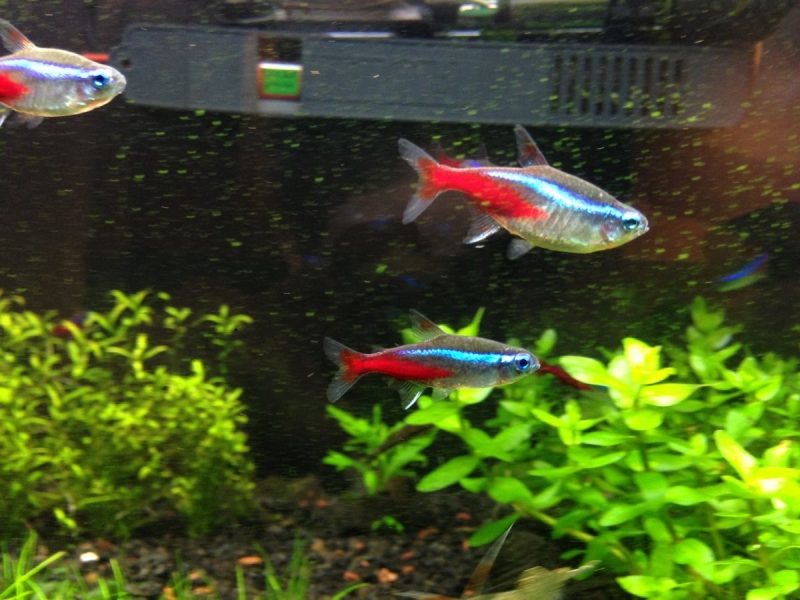 Tetras generally have a slim appearance, so if you notice that one of them has a swollen stomach, it can definitely be a cause for concern. But how can you tell whether your neon tetra is pregnant or just fat?

Luckily, it’s not too hard. Though the conditions may look similar, there are a few tried and true methods to figure out whether your tetra is carrying real babies or just a ‘food baby.’

A tetra’s gender and behavior, tank conditions, and tank companions are three factors you can examine to figure out what’s going on with your fish. Some of these are more reliable than others.

For example, your tetra’s gender (covered in Gender and Behavior) is going to be a more reliable indicator of pregnancy than the other fish they’re housed with (covered in Tank Companions). But despite this, all are still useful considerations.

When a neon tetra is pregnant, she’ll have a large stomach that looks distended or even bloated. Since tetras can carry hundreds of eggs, the stomach won’t be just a bit swollen— it will look unnaturally big.

In pregnant females, the vent will be enlarged in preparation for the birth.

However, this sort of examination can be difficult on a tetra. Besides being smaller, tetras are also fairly quick swimmers.

This means that you may have more success taking a picture instead of trying to track her around the tank.

So besides physical characteristics, you can also look at your tetra’s behavior. Your fish may change in appearance, but her behavior shouldn’t be otherwise different.

Pregnant tetras are just as active as those not carrying eggs. (Other behavioral cues that could signal a pregnancy will be covered in more detail later.)

Just like with any captive animal, fish in aquariums are at higher risk of obesity than their wild counterparts. And since aquatic animals are especially sensitive to health issues, this is a serious concern for tank owners.

Signs of obesity in neon tetras include:

One of the easiest ways to figure out if your tetra is fat is to monitor their food intake. Tetras don’t need much to be full, despite their drive to eat as much as possible. Just a small bit of food can distend their stomach.

So to see if this is the case, keep a careful eye on them during feeding times. See if they’re eating more than they should or stealing food from others.

Interesting READ  Do Fish Get Sad When Other Fish Die?

This isn’t always possible, however— you can’t watch your fish 24/7, after all. So to see if your fish are pooping more, you can also test the water for ammonia. If your levels are higher than normal, then it may be a sign that more waste is present.

You should also look out for gasping. If your fish are going to the surface more often and gasping, then oxygen levels have dropped and ammonia levels have risen.

Of course, tetras that are preparing to mate or pregnant may also try to eat more than their fair share. So to confirm whether your tetra is expecting, keep reading for some other reliable methods.

One guaranteed way to figure out if your tetra is pregnant or fat is to simply wait. Tetras have a very short gestation period and typically give birth within 24 hours of mating.

If you see her giving birth or eggs appear in the tank, then she was definitely pregnant. Conversely, if her belly never slims down and no eggs appear, then she’s likely just pudgy.

In case you don’t want to wait and are concerned about your tetra’s condition, keep reading to find out more ways to tell the difference between a pregnant and fat neon tetra.

Naturally, only females can give birth. So if your neon tetra is male, then by default he’s just fat. Though tetras look very similar no matter what their sex is, the two genders are distinguishable through several features:

The more tetras you have, the easier it will be to compare and spot these differences. But if you’re still having trouble sexing them, there are some additional signs specific to pregnant tetras.

Sexing them will also make it easier to see if they’re engaging in mating behavior. When a male and female pair intend to mate, they follow a specific behavioral pattern.

The female will remain in place, while the male “dances” around her in a vaguely square-shaped pattern. His movements will be jerky but repetitive.

If you notice this behavior, in addition to tetras chasing each other and pairing off, then it’s likely your female is carrying eggs.

Once she’s ready to lay them, tetras will generally look for an appropriate spawning place, such as plants with broad leaves or moss clumps. So if you see this behavior soon after the mating behavior, then you can be fairly confident that your tetra is pregnant instead of fat.

Conversely, if your tetras’ behavior has not changed at all from their regular routine, then it’s more likely that you’re just overfeeding your fish (or your tetra is being especially greedy).

Interesting READ  How Many Babies Do Tetra Fish Have At One Go?

Some fish will breed in captivity with almost no effort on the part of the owner, while others are very particular and require more work. Tetras fall within the second category, which is frustrating for breeders but helpful for owners trying to figure out if their fish are pregnant.

Neon tetras can be finicky breeders and usually won’t produce eggs until specific tank conditions are met. These are:

So if you haven’t met these conditions, then your tetra probably isn’t pregnant.

Despite this, it’s still possible for your neon tetras to mate. For example, if you perform a long overdue water change (thus suddenly reducing the nitrate levels), it may trigger spawning behavior.

Similarly, if your lights are out for an extended period of time or you’ve been generous with feedings, your tetras may also mate and become pregnant.

If you have tetras, they should be kept in a school of at least six. However, tetras prefer larger numbers than this to feel safe.

Additionally, the likelihood of a tetra being pregnant drops dramatically if it’s housed in a community tank. Even when surrounded by peaceful species such as rasboras, danios, or guppies, your tetras may not mate.

And if you have any of the following species in your tank, your tetras are very unlikely to feel safe enough to spawn:

All of these fish are aggressive, territorial, and otherwise not suitable as tank mates for tetras and similar species. If you currently have your tetras housed with these fish, it’s best to separate them into separate aquariums as soon as possible.

Tetras that have a large school and few predatory fish are more likely to become pregnant versus fish in smaller schools or which are housed in a community tank with multiple different species.

If you’ve noticed that your neon tetra is larger than normal, it’s important to figure out whether your tetra is pregnant or pudgy. Besides having a potential impact on their health, there are a number of other reasons to investigate.

For example, if you were trying to breed your tetras, figure out the right feeding schedule, or worried about the tank conditions, then your tetra being pregnant or fat could be a sign that you’re doing something right or wrong.

Thankfully, there are some quick ways to figure out what condition your fish is suffering from. Sexing your tetra, examining its recent behavior, testing the tank conditions, and considering their tank companions are all clues that you can use.

Though it will take some sleuthing on your part, you’ll be able to easily tell whether your tetra is pregnant or simply fat.