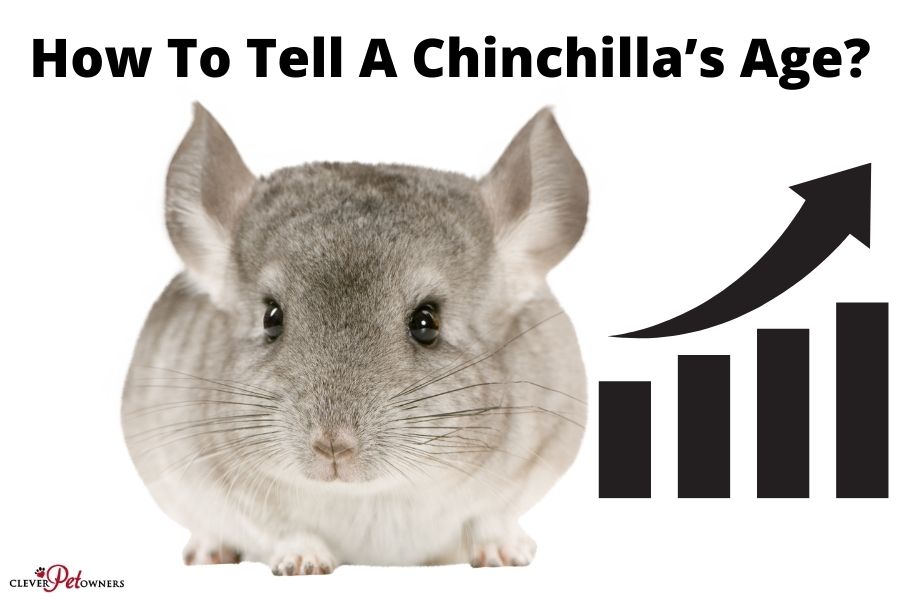 Have you newly adopted a chinchilla or had a pet chinchilla for many years? In either case, you might be wondering how old your chinchilla is and if there is an easy way to determine its age for yourself.

The short answer is: yes. Chinchillas experience several distinct growth stages, which can help you determine your chinchilla’s age.

Other factors, such as size, energy level, fur density, and behavior, also make for handy metrics. However, determining a chinchilla’s age becomes more challenging once a chinchilla reaches adulthood, as adult chinchillas can vary widely in size and disposition.

If you are having trouble, then talk to a chinchilla breeder.

Read on to learn more about the growth stages of chinchillas and the distinguishing characteristics you can look for to tell the age of your chinchilla, whether it’s an inquisitive kit or a mature adult. 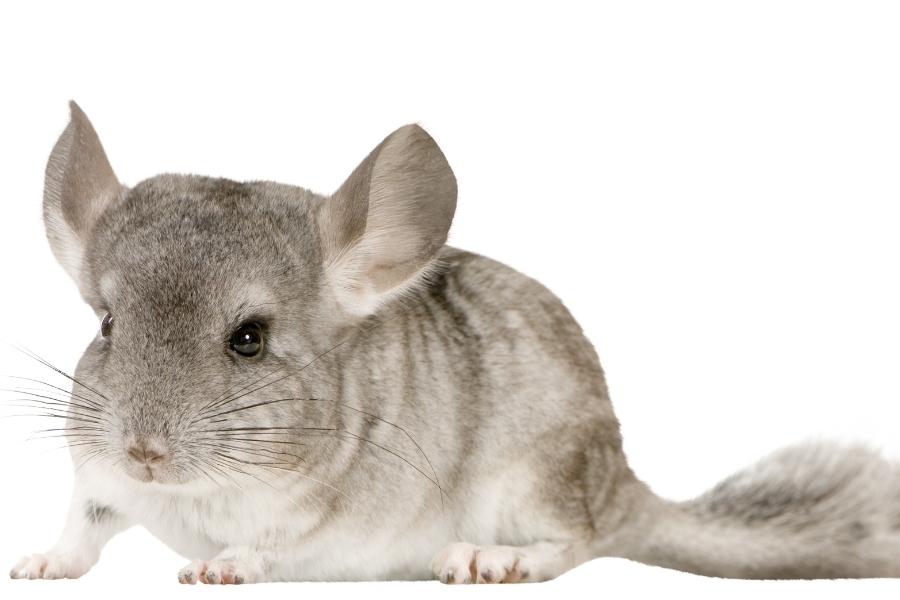 Even for a practiced eye, a chinchilla’s age can be troublesome to estimate, particularly once it reaches adulthood and stops growing, but several traits can act as signposts.

Here are the five easiest ways to determine your chinchilla’s age.

Adult (1+ years old) chinchillas typically weigh 1 to 2 pounds and measure 9 to 15 inches long, not including their tail. If your chinchilla has reached maturity, it will likely fall into these ranges.

Older chinchillas, particularly those approaching the end of their natural lifespan of about 8 to 15 years, may have a thinner, frailer look.

Note that female chinchillas are typically bigger than males.

They are particularly active between 8 and 12 weeks, and you are likely to find them eagerly exploring their environments (or possibly looking for ways to sneak out of it, so be on your guard).

Some adult chinchillas may remain just as active, while others may mellow once they reach maturity. Older chinchillas may be more sedate and sedentary as their bodies tire more quickly.

Young chinchillas, as well as most adults, like to explore and jump around their environments.

Sudden decreases in appetite or activity may indicate that your chinchilla is older and winding down.

Talk to a Breeder

Adult chinchillas vary in size, bone structure, and personality. These natural differences can make it difficult to determine your chinchilla’s age.

If in doubt, consult a chinchilla breeder, as they will have the necessary skills and experience to age your chinchilla accurately.

You can also ask the person or shop who previously owned your chinchilla to provide their best estimate.

Growth Stages of a Chinchilla 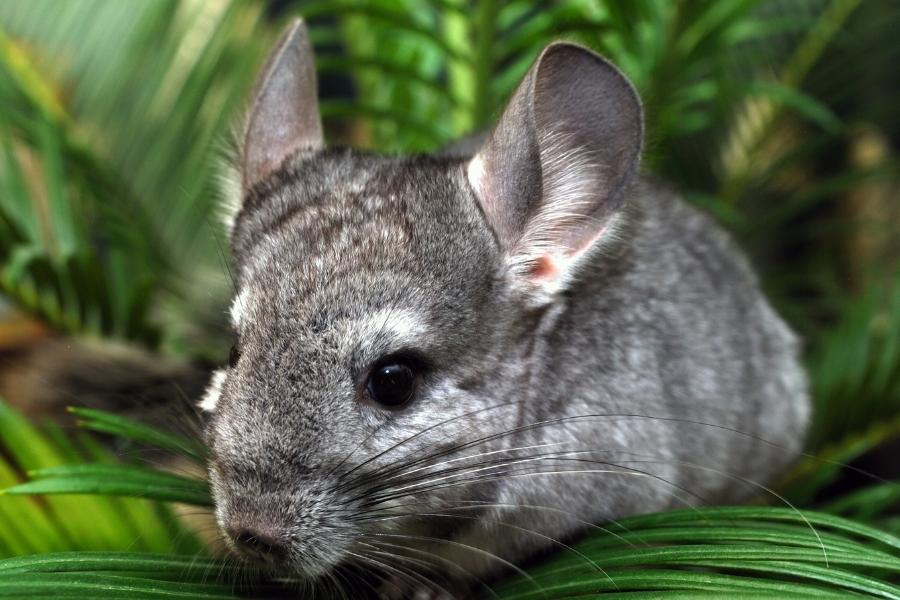 Chinchillas undergo three distinct growth stages in their first year of life. At 12-months-old, they are considered mature adults.

The average lifespan is 8 to 15 years, but some chinchillas can live for 20 to 30 years with good health and nutrition, though this is less common.

Interesting READ  Why Is My Chinchilla Laying On It’s Side? (4 tips to help!)

Newborn chinchillas are called “kits.” They are born with full coats of fur and both eyes open, and they typically weigh between 25 and 80 grams.

Immediately after birth, they will huddle close to the mother for warmth, but kits are active on the first day after birth and eager to explore their new surroundings.

Their ears start to pop up after around three weeks. Both ears and feet may appear disproportionately large at this age compared to the kit’s more delicate body.

At 2 to 3 months, kits are weaned and separated from their mother. Around this time, they start to appear less round and stocky, and they are extremely curious and hyperactive.

Weanlings may show signs of stress after being separated from their mother or introduced to a new cage or environment.

They may also appear smaller or “stunted” if weaned too early. However, these runts can bulk up again and grow into healthy adults with proper care and nutrition, regardless of size.

At 4 to 12 months, weanlings become juveniles. Juveniles experience rapid growth spurts as they near adulthood.

Their temperaments and behavior may drastically change as they mature. Chinchillas also tend to be their most active as juveniles.

Be sure your juvenile chinchilla has a variety of places to explore in its cage and plenty of chew toys to gnaw on.

After one year, chinchillas start to appear more filled out. Growth will slow down or stop altogether at 10 to 18 months.

However, growth spurts may occasionally still occur over the next 2 to 4 years and thus are not cause for alarm. Female chinchillas look “stockier” than males and are bigger on average.

Adult chinchillas often remain lively and active for most of their lives. Indeed, some will stay as curious and hyper as they were when juveniles!

Signs of Old Age in a Chinchilla As chinchillas grow older, they may start to change their behavior or exhibit signs of failing health.

If you are concerned about the health or well-being of your chinchilla, then visit your veterinarian to talk about treatment options.

Here are five signs that your chinchilla has reached old age and is winding down.

Older chinchillas may experience sharp changes in their feeding habits and appetite.

They may eat less and start to grow thinner if food/water intake is not closely monitored or supplemented.

Some older chinchillas develop malocclusion, or misaligned teeth, making it harder to eat hay and pellets. This condition could cause them to snub food they once devoured.

Older chinchillas may exhibit changes in behavior and activity levels as they tend to tire more quickly.

These changes mean they may need to take more breaks during playtime or have extended rest periods between handling.

Interesting READ  Why Is My Chinchilla Itching And Scratching?

They may also avoid top shelves and stick to the ground level of their enclosures to avoid jumps or excessive movement.

If a favorite shelter or hammock is on a top shelf, your older chinchilla will appreciate it if you relocate it to a more accessible level.

As chinchillas enter old age, they will likely appear thinner or frailer, particularly if they are not eating as much. Shedding may increase, causing fur to appear less dense and full.

As previously mentioned, these conditions may also make it harder for your chinchilla to eat.

Arthritis is common in older chinchillas.

Factors that Affect a Chinchilla’s Lifespan 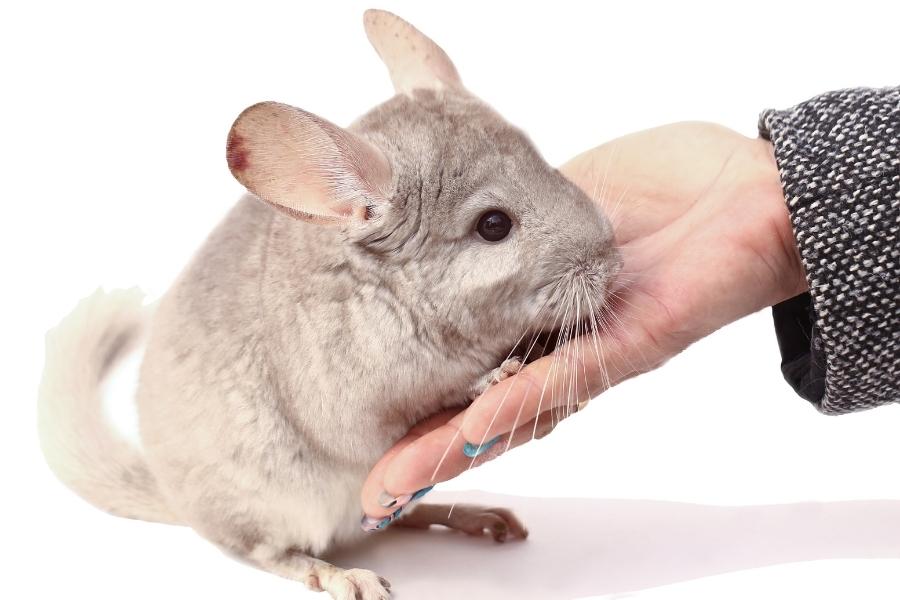 Chinchillas live 8 to 15 years though some can live as long as 20 to 30 years. Several factors affect a chinchilla’s lifespan.

By providing proper care and nutrition for your chinchilla, you can help ensure that they live a long, happy life.

Most important to a chinchilla’s health and well-being is its diet. A balanced, nutritious diet is essential to maintaining a healthy immune system.

Chinchillas require a mix of high-quality dry pellets and hay. Dried fruits and nuts may also be eaten and make excellent treats.

Chinchillas may consume carrots and green vegetables in moderation, but they are to eat no more than 10% of their body weight in raw veggies in a given serving.

As they age, you may need to mix additional supplements into their diet. Hand-feeding may prolong life in older chinchillas that cannot eat independently.

However, this will require a higher investment of time on the owner’s part.

Water from a bottle is the most hygienic and practical option, as water in bowls quickly becomes contaminated by fur, food, waste, and stray bits of bedding.

Regular activity and engagement will keep a chinchilla stimulated and prevent boredom.

Encourage a healthy chewing routine with fresh hay and new chew toys to prevent overgrown teeth and other dental issues.

A poor, absent, or inconsistent chewing routine (in addition to irregular eating habits) could compromise a chinchilla’s immune system, putting it at risk of bacterial or fungal infections.

Chinchillas are known for their thick, luxurious fur, but these dense coats need to be correctly maintained to keep your chinchilla comfortable and healthy.

Do not bathe chinchillas in water, as moisture will get trapped in their fur, resulting in skin diseases and hair loss. Instead, allow chinchillas to bathe 2–3 times a week in fine dust.

This dust helps remove dirt and absorb oils in the chinchilla’s fur. You can purchase this special “chinchilla dust” at most pet stores.

Genetics may disposition a chinchilla toward a longer lifespan.

If you got your chinchilla from a breeder, ask them about its pedigree, and you may be able to gauge better what kind of lifespan to expect.