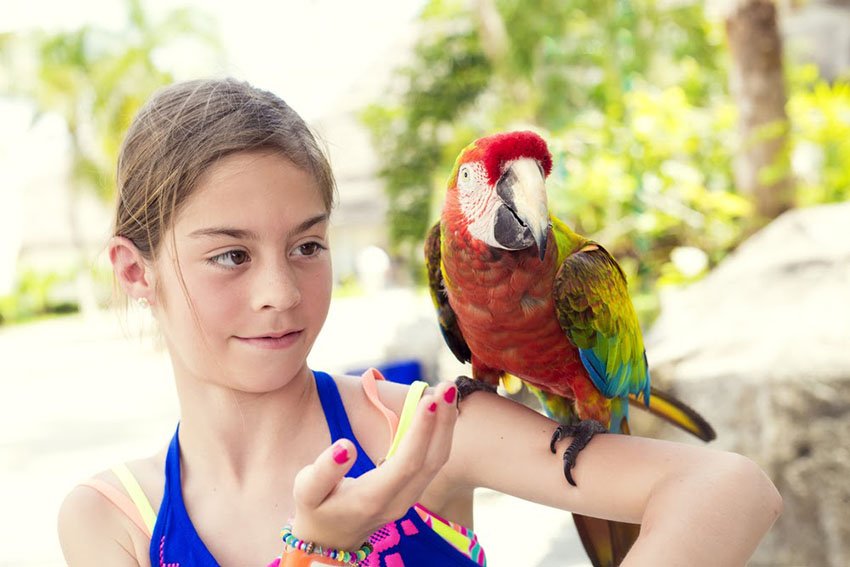 Trick training is a great way to spend time with your bird and strengthen your bond with her. Birds are active, intelligent creatures that thrive when they’re given a way to play and put their intelligence to good use.

Formal training sessions with your bird should be kept under five minutes. Birds have a short attention span and will learn best when training is kept brief and fun.

However, a lot of training can also happen in your everyday interactions through “capturing,” which is simply attaching a cue to a behavior your bird already does.

Parrots’ ability to mimic speech is part of what has made them such a popular pet. The ability varies between species and even between individual birds.

This trick involves teaching your bird to mimic a simple greeting. If your bird has any inclination to mimic speech, “hello” is an easy word that he will likely pick up quickly.

Some people choose to play recordings for their birds to learn from. This may work to an extent, but most birds quickly grow bored with hearing the same words over and over and won’t necessarily try to mimic them.

If they do learn to repeat words heard on a recording, it is unlikely to be at appropriate times. Without context, they’ll have no way to connect the word to something that actually happens.

Using a clear, excited voice will also help him pay attention and pick up on sounds.

If your bird doesn’t take to mimicking human speech, she can still learn to say hi by waving. One of the best ways to teach this trick is with capturing.

Many birds will raise their foot when anticipating stepping up or asking for a treat. If you can reward the behavior quickly enough and attach it to a cue, you will eventually be able to ask them to perform this trick at any time.

To teach the wave, you will already need to have trained your bird to step up on command. Once they are doing this fluently, you can offer your hand and instead give them the cue to wave.

The cue can be you waving or asking the bird to “say hi” or anything that works for you. When they lift their foot to step up, draw your hand back, praise and reward them.

Most birds will quickly pick up on this new trick.

If your bird already lifts her foot when asking for a treat or to be picked up, you can teach to wave by giving them the wave cue when they lift their foot and rewarding. Be sure to reward as soon as your bird raises her foot so she’ll understand what she’s being rewarded for.

This is a simple trick to teach, although it does involve two steps. It’s best to start with target training, which is a good foundational trick on its own and is useful for teaching multiple other behaviors.

The point of this trick is to teach the bird to complete a 360 degree turn on their perch. Many birds catch on quickly and enjoy doing this trick to earn a treat or toy. Some will even take to doing it to request something they want.

With target training, you are asking your bird to touch the end of a stick with her beak or move to a place you tap with your finger. Reward each time she does this.

Slowly increase the distance your bird must turn to touch the target stick or take the treat until she is turning all the way around. Ask her to “turn around” or give her the cue you’ve decided on each time.

As she learns what you’re asking her to do, you will have to lead her less and less. Gradually increase the distance between her and the target/treat.

Eventually she will know to turn all the way around when you give her the cue.

This is a fun trick to teach when your bird is in a playful, active mood. All you need is a small toy he is interested in picking up.

This may be a whiffle ball, a crumpled paper, or some other small object. The goal of this trick is to have a bird bring the toy all the way back to you.

Birds who already enjoy running around on the floor or throwing toys are especially quick to learn this trick.

Choose a safe toy that’s easy for your bird to carry. Start by handing him the toy and saying “fetch” when he takes it.

Then hold your hand or a bowl under the toy and wait for him to drop it. As soon as he drops it—as he eventually will—say “drop it” and give a reward.

Next, you can place the toy close to the bird. When he picks it up, say “fetch” and repeat the “drop it” process. Once your bird learns to associate the cue with picking the toy up and dropping it into your hand, you can start to move or toss it a slight distance away and ask him to fetch it.

Always reward when the bird drops the ball into your hand or the bowl.

There’s nothing quite as cute as a bird running to toss a ball through a hoop. For this trick, you may purchase a hoop specifically designed for birds or use a small cup or basket.

Teaching a bird to dunk a basketball is a natural progression from teaching him to play fetch. Instead of having the bird drop the ball into your hand, you’re now directing him to drop it into the hoop.

Any bird that has learned to play fetch can easily learn to drop a ball into a hoop.

If the hoop you’ve chosen is adjustable, put it on its lowest level to make the first few times easy for your bird. Ask him to fetch the ball and hold your hand over the basket as he drops it into your hand.

After a couple of times, slip your hand out of the way at the last minute, allowing the ball to drop into the basket instead.

Reward every time your bird drops the ball in the hoop, and he will soon figure out this is what you want him to do.

This is another trick based on the fetch command. Any bird that has already learned to fetch and/or dunk a ball should be able to pick up on it quickly.

The process of teaching your bird to fetch her toys to a chosen toy box is similar to how you would teach her to play basketball. Ask her to fetch and hold your hand over the box.

Once she’s fetched to you this way a couple of times, try slipping your hand out of the way.

Next, lay several toys nearby and ask your bird to fetch them one by one and drop them into the toy box. As she catches on to the trick, you may change the cue to “put them away” or a finger pointed to the toy box.

Gradually decrease the number of treats your bird receives between putting away toys until she is putting all of them into the box before receiving the reward.

Interesting READ  How Long should a Cockatiel be out of its Cage?

The nod yes trick is another that is based on target training. To easily learn it, your bird should first have learned to touch the end of a target stick to earn a reward.

Alternatively, you can simply use a treat.

Move your target stick or treat up and down in front of the bird. If he has been target-trained or simply wants the treat, his head will follow the up and down motion, earning him a reward. Incorporate a verbal cue like “nod” or “yes” so your bird will eventually be able to be cued to this trick.

As the bird gets accustomed to following the up and down motion, you can switch to using your finger, and eventually to cueing from a slight distance away. Always remember to use the verbal cue and reward for successful completion.

This simple trick can be taught similarly to the nod yes trick. Most birds will learn it quickly and some can become quite dramatic if a wings-up trick is added later.

Offer your bird a target or treat at about perch level so she puts her head down to get it. Cue her with the words “take a bow” or some other cue.

Reward with the treat. Practice a few times until your bird starts to catch on.

If your bird has already learned to step up, teaching her to fly to you is a natural progression. Only birds that are fully flighted should be taught this trick.

A trimmed bird will be too afraid to take off and may injure herself falling.

If your bird was trimmed but now has all her flight feathers, she will likely need lots of practice with very short distances before she feels comfortable flying to you.

Continue to move back and reward with treats when your bird hops, hops while flapping, and eventually flies to your hand. Make sure to incorporate a cue like “come to me” or a hand motion that your bird will begin to associate with flying to your hand.

This trick is easier for smaller birds, simply because it’s easier to get a tunnel big enough for them to climb through. Make sure whatever tunnel you want your bird to climb through has plenty of room for them.

There must be no danger of them getting stuck or panicking.

The tunnel should also be short and straight so that the bird can quickly walk through from one side to the other. For a budgie, a short, wide cardboard tube will work.

For bigger birds, you may use a tunnel meant for ferrets or small dogs.

Get your bird accustomed to the tunnel by having it about as you play with other toys. You can draw his attention to it and get him curious by placing a treat inside.

Once he is comfortable climbing into the tunnel, place a small treat where he can reach it inside the tunnel and hold a larger treat on the far side where he can see it.

Once your bird is comfortable with the tunnel, he will quickly learn to climb through it for a treat.

If at any time your bird seems frustrated or uncomfortable with a training session, back off and give him a chance to relax. Ask for and reward a familiar behavior to end the session on a good note or simply move on to another activity that your bird enjoys.

If he’s tired or hungry, let him go back to his cage or play stand and relax. You can always come back to the trick later. Trick training should be a happy activity for both you and your feathered friend.

Can You Have A Conversation With A Parrot?

Will A Mother Bird Come Back If The Nest Is Moved?

Do Birds Sleep with Their Eyes Open?