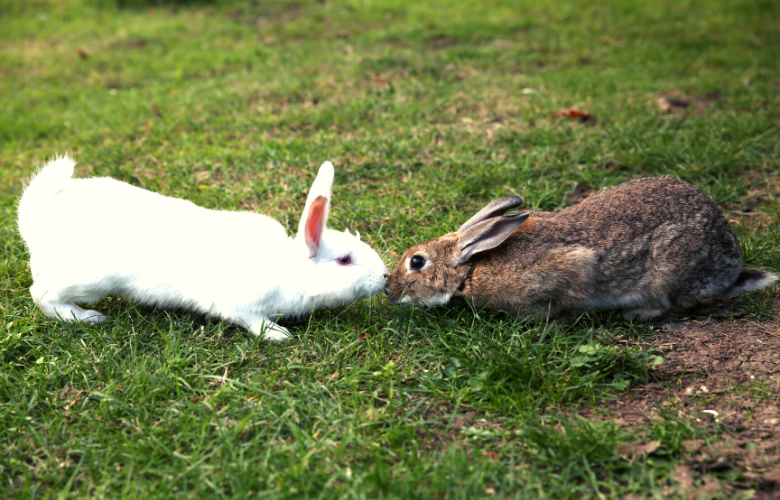 Rabbits are great pets to have as they are fun, playful, and loving. But sometimes, they can channel that love into mounting or humping. This can either be directed towards you or other rabbits.

When your rabbit humps or mounts other animals, or more specifically you, there are a few ways you can get them to stop and try to de-condition that habit out of them.

In this article, we will explore exactly why your rabbit is doing this and the best techniques to get them to stop so you can have a calm and playful rabbit without worrying about the humping or mounting.

Contents
Should I Stop My Rabbits From Mounting?
Five Ways to Stop Your Male Rabbit from Mounting His Mates
Why Does My Rabbit Hump The Other Rabbit’s Face?
What to Do If Your Bunny Humps You
Conclusion

Should I Stop My Rabbits From Mounting?

Rabbits love to play and communicate how they’re feeling through actions. Sometimes this can result in your rabbit mounting other rabbits or you. Mounting is when one rabbit either gets on top of you or another rabbit to assert dominance, communicate, or reproduce.

Rabbits are very social creatures and use interactions between other animals and its owner to guide its actions and how it communicates. Rabbits will mount other, more subordinate rabbits to communicate and assert their dominance.

This will mostly come from a dominant rabbit trying to establish itself as the boss and put the other rabbit in its place. Mounting helps to establish its social hierarchy in its environment.

For the most part, mounting is not too much of an issue and does not need to be stopped immediately. It’s very normal behavior for rabbits!

It would help if you began to prevent your rabbit from mounting when you notice it is doing it more and more frequently and becoming aggressive, as that can lead to fighting between the animals.

You can tell when things will take a turn for the worst by analyzing how the rabbit being mounted is responding. If you see it kicking, biting, attempting to flee, or making noises, then you know it does not want to cooperate, and the dominant bunny needs to be stopped, so it doesn’t escalate into a dangerous fight.

If the rabbit is not trying to assert dominance, then it is mounting to reproduce. This typically happens in the Spring when hormones are triggered and reproducing behaviors begin.

Mounting can be signs of your rabbit attempting to court other rabbits and show its interest in mating. Typically, this does not need to be stopped unless it becomes aggressive in nature.

Be sure to keep an eye out on your rabbits and make sure that no matter the scenario, all animals are happy and enjoying their time.

Five Ways to Stop Your Male Rabbit from Mounting His Mates

As naturally social creatures, rabbits will mount others to help establish social hierarchy among them. For the most part, this is all-natural and can be left alone, but there are moments when it is necessary to intervene.

It is crucial to know when to stop your male rabbit from mounting and how, so you can create a happy and safe environment for all the animals.

Get your rabbit neutered

One of the best ways to prevent mounting and humping as much as possible is to get them neutered. Neutering is when the veterinarian removes the reproductive organs from the rabbit entirely so it cannot mate, and there is a decrease in those hormones.

Interesting READ  Why Does My Rabbit Keep Flopping Excessively?

Neutering can help decrease the chances of a male becoming aggressive or showing mounting behavior by more than 50%. The sooner you do this, the better, as the mounting does not become a learned behavior.

It is important to note that this will not stop the mounting entirely but will significantly decrease how many times it happens and help the rabbit not become overcome by hormones. When a rabbit is sometimes overwhelmed by its hormones and needs to breed, it can become aggressive, starting fights or becoming too rough with other rabbits.

Once you see your rabbit mounting another and it seems to be going for too long or becoming aggressive, separate the two rabbits immediately and reward them with treats.

Treat training goes a long way with animals and can be the best solution to help the rabbits understand that mounting is not the desired behavior.

When you separate the rabbits, either put them side by side and reward them when they stay or separate them into two different areas entirely.

This might not fix the problem immediately, but slowly, your rabbits will realize that they are more likely to get treats when they don’t mount. This can help establish long-term positive behavior in your rabbits.

Always try to keep treats with you when your rabbits are playing with others. Things can escalate quickly with all animals, so it’s essential to be prepared to act within a minute’s notice.

If male rabbits are in groups that are too large, they can often become overstimulated and fixated on a need to establish hierarchy.

If a rabbit is seen as the most dominant in a large group of others, it will be more respected, thus granting it more friends and rewards from the other group members. Being the “weakest” rabbit in the group will mean it is isolated, left out, and dominated by the others.

The social hierarchy is a natural tendency in rabbits that, unfortunately, we cannot stop entirely, but we can help mitigate. Try keeping your male rabbit in smaller groups of bunnies, so the likelihood of them humping and mounting others is reduced.

The less your rabbit is likely to mount, the less likely it is for an aggressive fight to ensue between the rabbits, which means fewer injuries. So keep your rabbit’s group small and always be watching!

When you first bring your rabbits home, it is imperative to give them enough time to acclimate to their environment, their new owner, and their new friends if any other rabbits are in the house.

If you immediately put them in a pen with any other rabbits, they will quickly become dominated and lash out, creating long-term aggression towards the others.

Make sure your rabbit is in a safe and quiet space where it can be alone and acclimate for 3-5 days. When you notice it has become calmer and more comfortable in its home, you can then begin slowly introducing it to any other animals in the house.

This will help ease your rabbit into its new home and get it better socially acquainted with other bunnies, without any negative behaviors between rabbits. Once your bunnies have been friendly and well acquainted for over a week, then you can leave them alone in their cage together and have them live with one another.

Interesting READ  How Much Hay Does a Rabbit Eat In A Month?

But this process should be slow and one with caution. Always be sure to create the safest space possible for your rabbits.

Talk to your vet

If you have done all the mentioned measures to prevent your rabbit from continuously mounting and becoming aggressive with others, it might be time to see a vet.

You should always consult your vet when you notice something is off with your rabbit, as waiting can be life-threatening. Your vet will be able to examine your rabbit to see if any underlying issues are happening in your rabbit that you cannot see.

Often, it can be hormones or internal pain that is causing your rabbit to mount and dominate others excessively.

Your vet is the best resource for information on your rabbit and is always there for you!

Why Does My Rabbit Hump The Other Rabbit’s Face?

If you notice your rabbit humping another rabbit’s face, then what you’re witnessing is backwards mounting.

If you notice your rabbit backwards mounting another, you might want to discourage this behavior as this is how many rabbit fights ensue.

What to Do If Your Bunny Humps You

If your bunny begins to hump you, it might be sexually frustrated and attempting to breed or release some of its built-up tension.

If your rabbit is not neutered, this will happen quite frequently. Make sure your rabbit, whether a female or male, is spayed or neutered to reduce the amount it humps.

If your rabbit is humping you, separate it from you and reward it for sitting still and stopping. By offering it treats, it can understand that it gets rewarded when it is not humping you versus when it does begin to mount you.

Treat training goes a long way with your rabbit! If this still isn’t working, separate yourself from the rabbit and leave it alone to calm down. Eventually, it will snap out of it and go back to its usual self!

As social animals of nature, rabbits will mount and hump others as a way to assert dominance, show affection, attempt to reproduce, and communicate. These are all perfectly natural things for your rabbit to do and are not causes for immediate action.

When your rabbit becomes aggressive, or you notice another rabbit becoming aggressive with yours, be sure to separate them and allow them the space they need to calm down. Always have treats on hand for when you need to reward them for stopping.

The key to stopping your rabbit from mounting is to be aware. Always keep your eye on your bunny so you can step in whenever you need and put an end to the behavior.

Is White Vinegar Safe For Rabbits?

Why Is My Rabbit Holding Its Paw Up?

Do Rabbits Fight To The Death?