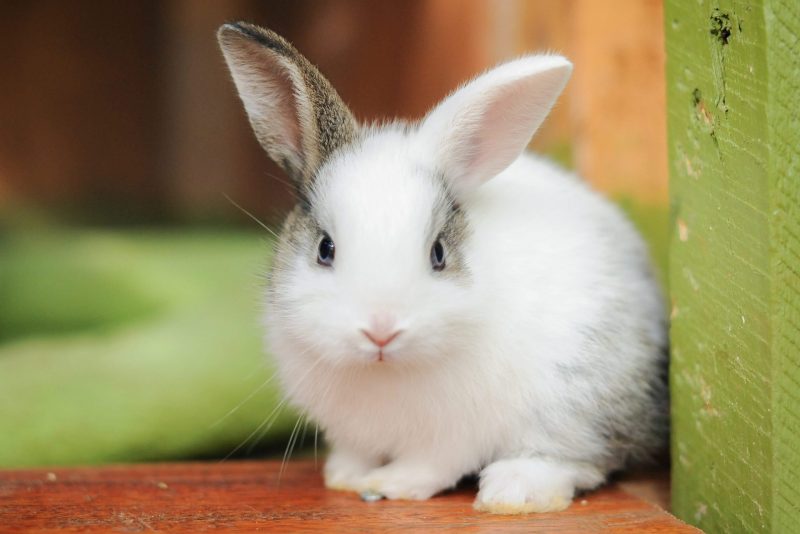 Rabbits are in so many ways just like human beings, they love attention and won’t be so pleased if they aren’t getting constant love and affection. They could get extremely lonely and possibly die of depression, and there’s nothing more depressing than seeing a lonely bunny slowly deteriorating into a shadow of its once vibrant self.

There are a few reasons why you should keep a single rabbit happy though, one of the main reasons however is the fact that such rabbit counterparts are having the time of their lives with multiple colonies in the wild, it would be utterly unfair to deprive your bunny that and still not give it the necessary attention.

So how exactly can I keep my rabbit happy?

There are a couple of ways to go about that, but I’ll espouse a few here. You can keep a rabbit happy by properly feeding it and making sure that it has an ample supply of food all the time, that way it won’t start envying its wild counterparts.

You have to ensure that its dwelling is extremely neat, rabbits are creatures of class and just its habitat being dirty could be a major turn off and depression influencer for a green single rabbit. Lastly, you could keep a single rabbit happy by ensuring it’s healthy, this can be done by having monthly veterinarian visits and frequent checkups if you notice something amiss.

Contents
I) 5 Steps To Keep A Single Rabbit Happy
II) How To Know If My Rabbit Is Lonely
III) Can Other Animals Keep A Rabbit Company?
IV) Conclusion

Single rabbits could get super depressed if you aren’t careful. This is due to a myriad of factors, but the main reason being their animal nature.

Wild rabbits move in tens, at times hundreds, and your pet bunny knows this. The only way you can take its mind off this is if you take due steps to make it not miss what it might be having without your watchful eyes.

Here are a couple of steps you could and should take if you want your single bunny all upbeat and avoiding depression.

They say food solves all the bunny problems, I couldn’t agree less after I saw a previously detached Hector (a bunny of mine) become super happy when I brought its fresh hay for the day. That’s just how these furry creatures are.

They don’t joke with their steady supply of premium foods. That way they won’t envy their counterparts of the wild that seemingly have their pick of wild food and extra juicy grubs.

A lonely rabbit would get even more agitated if it notices that its dwelling is always dirty. If you aren’t a neat human being on a regular basis, you should please steer away from rearing rabbits as their shelters can’t be cleaned once a week but rather every other day.

Once you get that out of the way it’s more unlikely that your single rabbit will miss anything in the outside world. Also, bear it in mind that rabbits are fundamentally different from other animals no matter the seemingly shared characteristics, treat your bunny on its own merits, and take out time to ensure its dwelling is as conducive as possible.

Interesting READ  Can You Use Feline Pine for Rabbits?

As they said, a healthy rabbit is a happy rabbit, it would be tomfoolery and frankly unrealistic to imagine a single rabbit being joyous if it is regularly battling health issues. It’s alone and sick, why won’t it get depressed?

The best way to combat this hence is to ensure that they get proper and quality visits from the vets, that way you’ll detect a potential health issue in record timing. Once your single bunny is healthy, there’s a higher chance that it’ll be happy.

Step 4 – Ensure They Are Safe

Rabbits are extremely safety cautious and as such, they won’t take too kindly to being alone yet being unsafe. Once you’re certain that you are going to keep a rabbit alone the least you can afford your furry buddy is ample safety from predators, haters, and adverse weather conditions.

Anything short of that will give your rabbit a sense of paranoia, which will lead it to attempt escaping and foster a deep sense of insecurity while it’s under your roof as a tenant.

Step 5 – Avoid Acts That Can Terrify Them

As I stated earlier in this piece, rabbits aren’t too unlike human beings. One of their key similarities with us is that they do not like being terrified.

They are homely creatures that feel they have the tools to defend themselves once in a group, but once they are kept alone that might translate to a brooding sense of terror. Ensure that you avoid acts that can terrify them, that’s the best way to lay their little hearts to rest.

How To Know If My Rabbit Is Lonely 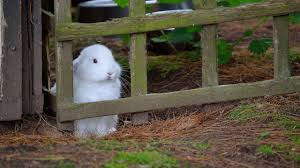 Don’t forget one very salient thing, no matter what we do we’ll always be human beings and they’ll always be rabbits. As such it’s little wonder why most times the typical rabbit owner would miss signs of his rabbit exhibiting loneliness and occasionally crippling depression, and that’s the reason I’m going to show you a few pointers to tell you that your furry buddy might just be lonely.

A rabbit that typically is comfortable in its own space all of a sudden starts latching up to you like you were its long lost first sibling. A couple of things that are clear indicators of this is when your bunny starts nudging, nipping, and biting.

Once you notice all these supposedly strange behaviors, it’s not time to recoil into your shell and avoid the bunny. Now you need to do more in keeping it happy and less attention-craving.

A typical happy and vibrant bunny would suddenly become sullen and unhappy. A rabbit that usually responds to you in record time once you beckon on it would all of a sudden become withdrawn and solemn, this is a very sensitive pointer indeed.

The bunny may even lose interest in eating and drinking, or even sleep with it’s eyes open. Now it’s time to step in and allay those fears and pains.

Typically, bunnies are super friendly and non-destructive. However, when they start tearing everything in sight and acting all stuck up it’s a great pointer to tell us that it’s certainly getting super lonely.

Can Other Animals Keep A Rabbit Company?

Rabbits are super cuddly and incredibly friendly, so it’s not rare for people to wonder if they can live with other animals free from jealousy and potential conflict. There’s a fine line between tolerance and genuine affection so permit us to show you a couple of animals that can keep your furry buddy company.

As long as there’s enough space you can harbor your chickens with your bunnies. More so, they share the same diet so it won’t be such a big deal. However, ensure that your rabbit is properly trained so that it won’t attack the chicken or step on toes while seeing the animal as a competition.

They’ll keep each company, and with the right safety protocols, live harmoniously. 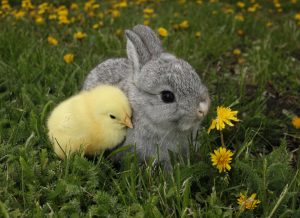 Some people house rabbits with guinea pigs and that isn’t such a bad idea if both animals are naturally friendly and properly trained. However, if they aren’t well nurtured this would be a horrible experience because both animals are notoriously competitive.

If care isn’t taken there would be a fight without you knowing and one of your pets might be seriously harmed or worse still, left for dead.

I know, you might be wondering how I snuck up a fellow rabbit at the end of the list but there’s a reason why. Rabbits tend to be super competitive and occasionally averse to neighbors, so the rabbit you introduce to it is as much a stranger as a guinea pig or chicken. Rabbits can live with fellow rabbits only if you’ve bonded them properly, anything short of that might have truly dire consequences.

Rabbits aren’t that hard to keep happy, you can make a bunny super happy if you do just a few things that would make it glad and not miss the great outdoors. Some sacrifices must be made to put your furry buddy in a position to trust you, since they are living alone the only person they can technically call a friend is you, so you shouldn’t mess up that acquired level of trust.

If you lose it you might never get it back. You should always keep its surroundings neat, you should ensure it gets proper visits from a professional vet and you should avoid doing anything that would make it scared and recoil to its shell.

Once you do all of these there’s no reason why your furry buddy can’t live alone.

What Does It Mean When Your Rabbit Runs Around Really Fast?