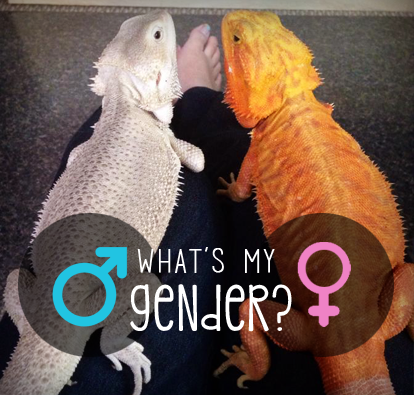 If you have a bearded dragon as a pet, you may be curious as to what their gender is! We’re here to give you the signs to figure it out.

There are a few ways you can tell, and they’re all pretty easy! It’s something you can do from home, without any added stress.

The bearded dragon needs to be about 4 weeks old before you can find out the gender. We don’t recommend trying to figure it out before that. Once they hit 4 weeks, you’re good to go.

Contents
I) Five Ways To Tell The Difference
II) Physical Differences
III) Can bearded Dragons Change Their Gender?
IV) Difference In Care Between Males And Females
V) Can You Keep A Male And Female Bearded Dragon Together?
VI) What Does Stress Look Like?
VII) Conclusion

Five Ways To Tell The Difference

There are three ways that are used pretty commonly to spot the difference. You can try all three if you want to be pretty sure that you’ve labeled the gender correctly.

This is the first sign that you can look out for. A male bearded dragon will have two of these hemipenal bulges right underneath their tail.

To do this, make sure you are gentle with your bearded dragon. Pick them up and flip them over, making sure to support their entire body.

Do it slowly so that they aren’t overwhelmed. You should be able to locate the bumps quickly, and distinguish which gender your pet is.

If you’re having a hard time seeing them, you can use a flashlight. It may be easier if you turn off the lights in your room and use the flashlight as your only light source.

Look for the shadows that appear: two for male, one for female.

Femoral pores are used for excreting chemicals, which help communicate to other bearded dragons, especially during mating season. They are located on the bottom of your bearded dragon’s hind legs.

These are found on both males and females, but there is a significant difference between the two. Male bearded dragon’s pores are more pronounced because they’re larger in size and darker in color.

Female bearded dragons have pores but they are much smaller in size and have a lighter color. If you are trying to locate them, again be careful when holding your bearded dragon.

Don’t aggravate them or make them uncomfortable. Be gentle with them, holding with a soft grip.

Make sure not to hold them too long, as this can cause distress to your animal.

We can also go over some typical bearded dragon behaviors, and how they can relate to what the gender is. This doesn’t always work, as bearded dragons are all different, and they may not display typical behavior.

However, there are some tell-tale signs that are more related to males or females. We’ll walk you through some of these.

A lot of times, this gesture is a way to show submission. Females will occasionally do this around a male.

It also can be seen in females waiting to mate, and as a sign of fear when a predator is nearby.

This behavior can actually be used with both male and female bearded dragons, but typically is found more with males in mating season. It also can be a sign of aggression.

A male bearded dragon will typically have a larger head size, with a female having a smaller, thinner, shape. A female will have a slimmer tail than a male; a male will have a thicker tail that reaches down to the tip.

Can bearded Dragons Change Their Gender?

You may be familiar with the concept of “temperature dependent sex determination.” Essentially, this concept is that the gender of reptiles does not rely solely on sex chromosomes, but rather, the temperature of their environment during development.

Research has shown that raising the temperature during incubation can turn a male into a female. Therefore, males can become females during the early development stage, but females cannot become males.

You don’t need to worry about this happening once you have your bearded dragon, as it occurs during the early stages. Most people get their bearded dragon when they’re pretty young though, so you probably won’t be able to tell the gender yet.

Only after the four-week mark can you start to notice the signs. It’s even better to wait a couple months, as the signs will get more pronounced.

Difference In Care Between Males And Females

You’ll find that there’s not a huge difference between having a male and female bearded dragon. There are some behavioral changes, but overall, nothing big. You may be wondering which is easier to care for, but each of them has their challenges.

A female can actually lay eggs once a year, even if she’s not with a male. The eggs won’t be fertile if she hasn’t mated, though.

You’ll have to take special care of her during this time, and make sure she’s kept extremely healthy. If you own a male, you may see some aggression during the typical mating season, which is around late spring and summer.

They may bob their head or display some dark coloration. This all depends on your bearded dragon and their personality, but you shouldn’t have to deal with anything too crazy.

Just know that there are some differences between owning a male and female, and you can take that into consideration when you are looking at which one to adopt.

Can You Keep A Male And Female Bearded Dragon Together?

To give the short answer, no. This is not advisable.

When they are young, if there are a lot of baby bearded dragons together, the less aggressive ones may not be able to get food. This can lead to smaller, frailer bearded dragons.

How aggressive they are does have to do with their personality, which you usually don’t know when you get them. But you run the risk of them hurting each other, or at the worst, one killing the other.

One dragon will dominant the other, and will fight for the food, water, and heat. Males are usually very territorial over females, and the mating process can be very aggressive.

You don’t want to put bearded dragons together unless you really know what you’re doing. Even then, you don’t know how they’ll act towards each other.

When you’re watching, they could act fine. But when you leave, you never know what’s happening in the tank.

The best thing to do is only house one bearded dragon at a time. This is safer for them, and should keep them in the best health possible.

Even if you have two mild tempered bearded dragons, it may stress them both out to be kept together. Stress is never good for an animal’s health.

Bearded dragons have many signs that show they are under stress. One of them is dark coloration.

This can happen in both males and females, and this will happen around their beard. They’ll exhibit a dark color.

They also can hiss and puff out their beard. You also will want to notice how they behave when you have them outside of their tank, when they are around you.

If they try and back up or are very still, they may be pretty stressed. If they come up to you, that’s a good sign.

It’s important to have some idea as to whether or not your bearded dragon likes being around you. Hopefully they do!

If you don’t take them out very often, it could be that they are nervous and not comfortable around you. Just start taking them out more often, and they should get more and more comfortable.

It’s essential that you have a good relationship with them, and work towards having the best environment for them that you can.

Well, we hope now you are prepared to determine the gender of your bearded dragon! Try the tips that we gave, and make sure you’re careful when trying to spot the budges or femoral pores.

Also, rest assured that your bearded dragon will not change gender while you have them. There are great attributes to having either a male or a female- you can’t go wrong!

What Vegetables Can Bearded Dragons Eat?

Is It Okay For My Bearded Dragon To Sleep In His Water?