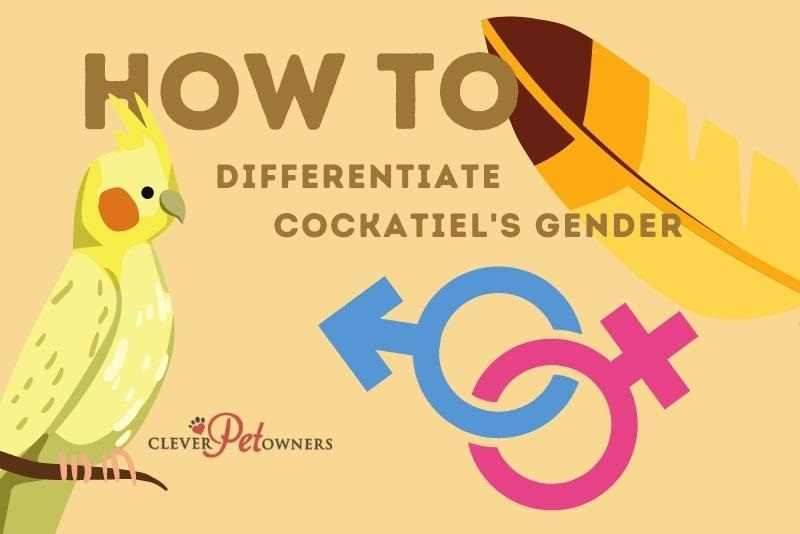 Many parrots are not sexually dimorphic, meaning you can’t tell whether they are male or female just by looking at them.

Cockatiels are an exception. Aside from some mutations such as lutinos, the coloring of males and females differs once birds have reached full maturity. Male and female behavior also tends to be distinctive.

In this article, we will guide you through the best methods to identify your cockatiel’s gender, how each color mutation differs, and when is the best time to do that.

Contents
At what age can you tell the gender of a cockatiel?
How to identify gender of cockatiel
Method #1. Color patterns
Method #2. Color mutations
Method #3. Behavioral differences
Method #4. DNA testing
Is it better to get a male or female cockatiel?

At what age can you tell the gender of a cockatiel?

Cockatiel chicks molt their first set of feathers and begin to get their adult coloration at 6 to 9 months of age. Around the same time, you may notice behaviors that will lead you to believe a chick is either male or female.

You may be able to accurately guess your tiel’s gender even before he develops his adult colors based on behavior. However, early traits can change as chicks grow older, so you may be surprised when a chick’s colors and personality blossom with adulthood to find that your original gender guess was off.

If you need help on how to gauge their adulthood, do check out our popular post about how to tell the age of a cockatiel.

How to identify gender of cockatiel

If you have a good grasp of male/female color patterns, color mutations, and cockatiel behavior, you will most likely be able to combine these facts to determine your bird’s gender, even if the individual differs from the norm in one way or another.

In this guide, we will feature 4 methods taught by our in-house experts (clicking on the hyperlinks will bring you to the respective sections):

Note that although combining all the visual methods can significantly increase your chances of identifying the tiel’s gender, only a DNA test can guarantee 100% accuracy in telling whether your cockatiel is male or female.

Once cockatiels have gone through their first molt at six to nine months, you can tell if they are male or female by observing their distinctive color patterns UNLESS your bird is one of several color mutations we’ll discuss later.

The following characteristics apply if your bird is a normal gray, white-faced, fallow, cinnamon, or silver.

Male cockatiels will have solid yellow faces and bright orange cheek patches. If your bird is a male white-faced cockatiel (lacking any yellow pigment), his face will be pure white.

With their first molt, male tiels will lose the yellow or white bars on their tail feathers and the spots on the underside of their wing feathers.

Interesting READ  Can You Keep A Bird In Your Bedroom?

Females also retain the gray and yellow barred markings on their tail feathers and the spots on their wing feathers that all juveniles have.

This section is for mutations such as pied, lutino, yellowface, pearl, pastel face, and albino.

These color mutations can make visually sexing your tiel more complicated, and with some mutations, you’ll have to rely on other indicators altogether.

Whether you can visually sex a pied teal depends on the individual bird and what other mutation crosses are involved.

Females may have more yellow on their faces and bright cheek patches. Some pied tiels known as “dirty-face pied” will have a gray patch on their faces, replacing the yellow mask if they’re a male.

If your pied tiel has retained her barred tail markings, she’s female. However, he is male if he has a dark tail and no bars.

If the tail is completely light-colored, you will have to rely on behavior or DNA sexing to be sure of your bird’s gender.

Female lutinos usually retain the barring on their tail, though it will be faint. If the bird is a lutino pied, barring may not be evident, and other observations will be required to determine gender.

Cheek patches will not be significantly brighter in males, but other color patterns will be definitive.

Side note: If your bird is pure white but has dark eyes, she is a clear pied, not an albino. Visual sexing will still not be possible.

Individual birds will naturally differ in behavior, but some general observations can often help you determine whether your bird is male or female.

Male cockatiels are generally more vocal and prone to mimic. At around six months old, they will usually be whistling, singing, and possibly attempting to mimic sounds.

They are also more likely to show off by strutting, hopping, tapping their food dishes or toys, and lifting their wings into a heart shape as they whistle and sing.

Their outgoing, curious, and entertaining personalities often make them the center of attention.

However, male cockatiels will also enjoy hanging out on your shoulder or watching as you go about your daily activities.

A male cockatiel whose hormones are active may attempt to mate with a toy or other object.

She is likely to enjoy snuggling up on your shoulder more than anything. Of course, each individual will vary, and some female tiels are full of spunk and sass.

The more you interact with your bird, the more her personality will have a chance to shine.

Interesting READ  Can Parakeets And Cockatiels Live Together?

A female wishing to mate will tilt her head, flatten her back, and rock back and forth, chirping softly.

If you cannot determine your cockatiel’s gender from color patterns or behavior and want to be sure, you can have a DNA test done.

This will require obtaining a blood sample (often by clipping a toenail) or plucking a chest feather from your bird.

Companies that allow you to collect the sample yourself and mail it in for testing do exist.

Make sure you do plenty of research to be comfortable with the process and able to do it safely.

It’s often best to have your vet take care of this, especially if you’re collecting a blood sample. A bird can bleed to death far too quickly if you cannot to stop the blood flow, even from a broken nail.

Is it better to get a male or female cockatiel?

Male and female cockatiels make equally wonderful companions. Both genders can be charming, affectionate, and fun. With proper interaction, a cockatiel of either gender is one of the easiest parrot species to incorporate into your home and routine.

However, there are a few differences between them that may help you decide whether a male or female is a better fit for you.

Female cockatiels crave companionship. As with any parrot, you should be prepared to spend large chunks of time with your bird. She will love nothing more than just hanging out with you no matter what you are doing. A lonely or bored female cockatiel may repeatedly call with a loud whistle.

Cockatiels are easily inclined to nest, so you should be prepared for a female cockatiel to lay eggs now and then.

Make sure she always has access to a cuttlebone or some other form of calcium to reduce the risk of egg binding.

Some female tiels can become chronic egg-layers, and you will need to take steps to discourage this behavior.

Like females, male tiels love to have friends, humans or avians. If you can allow safe free flight in at least one room of your house, they will thrive on the exercise and freedom it gives them.

If your cockatiel can’t see someone or something he is attached to, he may try to make contact with repeated loud calls. Cockatiels are not considered one of the loudest parrots, but a bored or anxious boy can make your ears ring.

Whether male or female, cockatiels need large cages and plenty of interaction and companionship.

Both genders enjoy toys, especially anything they can shred or swing on. Both may become skittish or irritable if they are tired or have not enjoyed enough positive interaction.

However, with proper care and handling, they are among the sweetest of feathered friends.

Is Vinegar Safe for Birds

How To Tame A Scared Bird In 1 Day

Is It Cruel To Keep A Bird In A Cage?

Do Amazon Parrots get along with Conures?

How To Select Safe Toys For Birds?

How to Tell if Your Bird is Bonded to You (7 Signs!)

How To Tell If A Bird Is Stressed