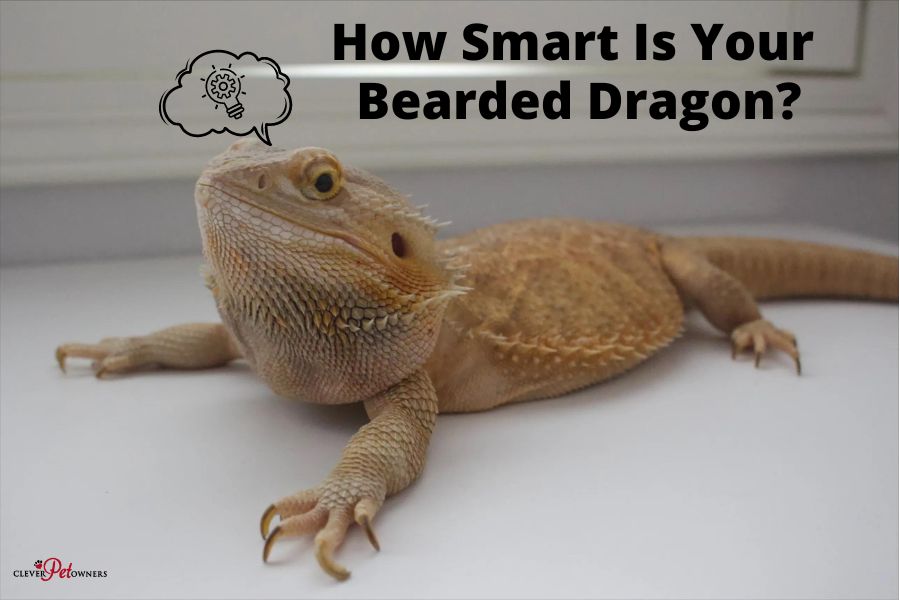 Bearded dragons are smarter and more emotionally intelligent than people credit them for.

While their range of intelligence is limited as they don’t experience thoughts the way we do, they’re still able to learn and imitate behaviors.

Read on for more information on how smart your bearded dragon is and how you can use that intelligence to further your bond with them.

#1 They can recognize their owners

Bearded dragons often scratch the glass of the enclosures when their owner enters the room.

This behavior indicates that they are happy to see their owners and want to spend time with them.

You may also notice that your beardie licks the air when you’re around, which means they recognize your scent. They’re known to lick their owners or other surfaces as well.

When their owner isn’t around, they may become less active, refuse to eat, or even go potty because their favorite person is missing.

You’ll likely find that your beardie may like or dislike certain family members or friends that visit. Instead of having the same reaction with each person they interact with, they show that they have different feelings towards different individuals.

#2 They can regulate their temperature to precision

Beardies have also known to be great thermoregulators. While this isn’t true for every bearded dragon, the vast majority know how to self-regulate their body temperatures.

Bearded dragons prefer environments with a temperature range and often move around to different locations to best regulate their body temperature.

Their behavior for thermoregulation is based on instinct, which means they’ll respond accordingly to risk factors (such as a predator in the wild).

When they deem the area safe, beardies will take advantage of the health benefits coming from the temperature.

Otherwise, they’ll use mouth gaping to maximize the benefits without using too much energy.

#3 They can perceive sizes and depths similar to human eyes

It was determined that bearded dragons could see different sizes and perceive optical illusions. This means that their brains can process complex images and will respond accordingly.

While illusions trick the brain, it shows that bearded dragons’ brains are further developed than previously believed.

#4 They can differentiate colors

Another experiment used a color (for this specific experiment, green was used) to test a bearded dragon’s ability to associate that color with a food reward.

To do this, they covered a food reward with a colored paper circle.

They were then trained to respond to that color and were then given a choice to pick between the color green and a different color.

More than 50% of the beardies could differentiate the two colors. It was concluded through this example and further research that bearded dragons could distinguish between different colors.

Interesting READ  Is a Bearded Dragon The Right Pet for Me? (5 Big Signs!)

Furthermore, the study showed that some bearded dragons prefer brighter colors, though there was a correlation between higher stress levels with brighter colors.

In addition, beardies have also been known to show preferences for certain colors or objects.

Examples can include a preference for certain colored food bowls, items within their enclosure, and objects potentially laying around a room.

They may also choose not to eat certain colors or eat out of anything but that preferred food bowl.

If your beardie seems to not like specific foods, there’s a chance that it may be the color, not the taste.

#5 They can imitate other beardies

Another study was conducted using one bearded dragon trained to open the door to retrieve food by watching others.

By what is known as “social learning”, bearded dragons can watch and imitate other dragons.

This type of learning is also considered complex, requiring individuals to process the information they’re seeing.

They then must be able to understand the visual to make the connection from the action to the reward.

However, the experiment also showed that the beardies could not use individual learning.

Without being shown a visual of a trained bearded dragon opening a door and getting a worm, the beardies could not repeat the action without any guidance.

#6 They respond to voice and presence

As mentioned previously, bearded dragons will respond to their owners. In addition to that, they may react differently when you’re around versus when a stranger is visiting.

You may also find that your dragon is more relaxed when you’re around them than if a family member checks in on them.

They may become excited when you enter or feel indifferent when someone like a roommate or parent enters the room.

Some beardies will react to different voices and even music. They generally tend to prefer softer music and voices.

Can I train my bearded dragon?

Yes, you can teach your beardie tricks and even use that as a way to bond with them.

However, always ensure not to push them past their limits and/or force them to do something they don’t want to. Make sure the training periods are a positive experience with rewards.

Training 1: To respond to your calling

The best way to train your beardie to come when called is to call their name while holding food. The best choice would be one of their favorite foods in small portions.

They’re very food driven and intelligent; therefore, they can recognize the potential reward for the behavior cue. Some beardies may take extra practice to learn.

The easiest way to teach them is to start off with a short distance between you two. This way, you can ensure they can see the food you’re holding when you call their name.

From there, you can start putting more distance between you and your beardie, and they’ll eventually learn that if they go to you when they hear their name, they’ll receive a reward.

The easiest way to train them where to go potty is to first figure out their bathroom habits. This will also help minimize accidents around your home and on your furniture.

Designate a certain area of the enclosure to help them associate that spot with where they should go.

If you notice that your beardie tends to defecate every few days, you’ll want to act based on those observations.

The easiest way to prevent accidents and put your beardie on a schedule is to give them regular baths at least 2-3 times per week.

Most dragons love bath time and will even prefer to go potty in the bath water, which is often easier to clean than the enclosure.

You’ll also want to recognize where your beardie tends to go potty. Oftentimes they will choose a spot within the enclosure.

You’ll want to keep that spot clean as soon as they defecate. The reason is bacteria, and your beardie will be more likely to use that spot again in the future.

Depending on your substrate, you can put a small box in that area or something easier to clean, like a removable surface.

Training 3: To walk on a leash

Ensure that your bearded dragon is comfortable with you handling them and has already formed a bond with you before continuing.

You do not want to force them to wear a harness when they don’t want to. It’s best to create a safe environment with rewards such as treats and comfort.

The first thing you want to do with your beardie, once you’ve put them on a leash, is to bring them to a quiet area with minimal noises so as not to scare them.

Never let them roam free without the leash because they can become easily frightened and run away.

You’ll also want to ensure the ground is clear of any debris that could hurt them.

Over time, your beardie may enjoy these little adventures, and you’ll be able to expose them to more stimuli without causing them too much stress.

Your bearded dragon may be smarter than you give them credit for. While bearded dragons are each very different in their personalities, you can find ways to get them to cooperate with you.

Teaching them tricks like coming when called or potty training them will help strengthen your bond and make your lives easier.

Bearded dragons also have different personalities that may affect how cooperative they want to be. Patience is key!

Some bearded dragons may also take longer than others to catch on or simply be too stubborn to listen at first.

Remember, never force your beardie to do something they don’t want. It will be harmful to your relationship and make training difficult in the future.

What Vegetables Can Bearded Dragons Eat?

Can Bearded Dragons Eat Romaine Lettuce? Is It Good For Them?

Is a Bearded Dragon The Right Pet for Me? (5 Big Signs!)