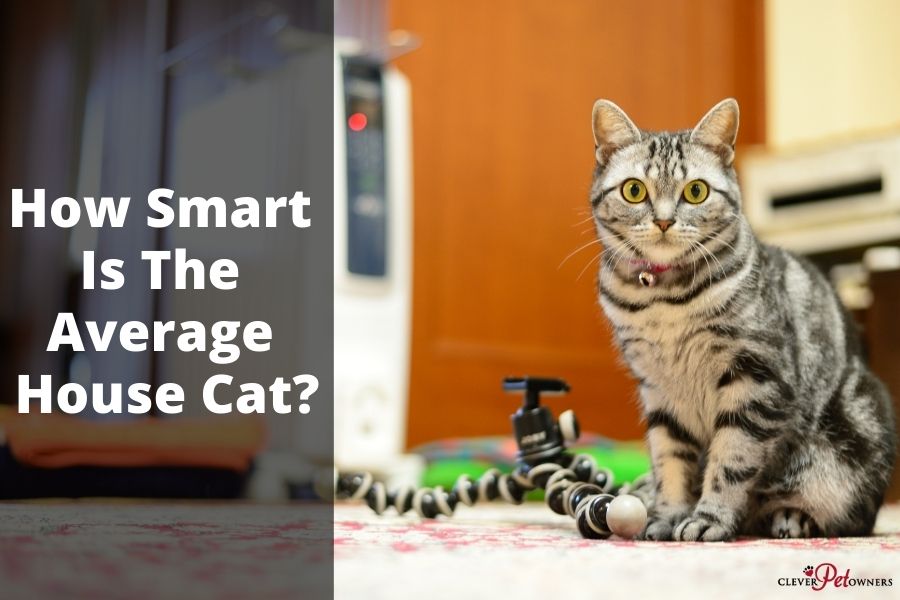 Cats are mysterious pets. They can be one of the smartest animals you have ever owned, or they could seem like they don’t know what they are doing.

They tend to keep us in the dark about how smart they are, but how smart is the average house cat?

Intelligence is a relative term. People interpret it differently, and there are many factors that go into intelligence. But the average cat is quite smart, with a brain structure similar to humans and 300 million neurons!

There are so many other factors that prove the average house cat can be pretty intelligent but again, intelligence may change depending on your parameters for being smart.

Contents
I) How clever is the average house cat?
II) How to tell if my cat is smart (5 signs!)
III) Which cat breeds are the smartest?
IV) Can I teach my cat tricks?
V) Conclusion

How clever is the average house cat?

Cat’s intelligence fluctuates depending on the parameters you consider intelligence. Cats don’t always act the way we want, which can often be mistaken as lacking intelligence.

A cat’s brain structure is similar to a human’s! They are so similar that it is about 90% similar to us humans! That’s amazing!

Cats have about 300 million neurons. This is nothing compared to humans, with about 86 billion neurons within the brain, but it is still significant!

What is a cat’s average IQ?

It can be challenging to figure out the average IQ of a cat as they can’t take the same tests that we can.

They can’t just answer the questions like us humans do and logically respond to the situations presented.

But with observations, scientists have learned that a cat’s average IQ is about 100 when given a cat-specified IQ test. If you are wondering what their IQ is on the human IQ test, it is about 10.

Remember, these tests are not very accurate because cats have a mind of their own, and sometimes, they may not be in the mood for testing.

Are cats smarter than dogs?

Some consider obedience and learning tricks as showing a pet is smart. Many owners never even teach their cats tricks because they tend to do their own thing.

The average IQ of a dog is about the same as a cat, somewhere around 100. These are tests that have been curated for dogs.

If you look at the anatomy of it all, cats have comparatively larger brains than dogs and more neurons.

They may not seem like it because they may not listen, but it just shows that you cannot judge a book by its cover.

Both pets are pretty smart. They just have specific characteristics that make them intelligent in those areas. Cats are strong-willed and stubborn, while dogs are obedient and loyal.

How smart is a cat compared to a child?

When you look at a cat’s intelligence, they can perform many tasks that a 4-year-old can. This includes ideas like object permanence and other similar tasks.

Based on IQ tests (the human ones, of course), cats may be as smart as a 6-year-old. These tests don’t always measure everything a cat knows, so your cat may even be more intelligent.

Interesting READ  Will Cats Eat Cockroaches? (What you should do)

You won’t be able to go around just testing your cat with an IQ test. That is not a plausible solution to determining your cat’s intelligence.

Instead, you can observe your cat to see how smart they are. These are some things to look out for when you are trying to figure out their level of intelligence:

If you have ever dealt with children or have your own children, you may have heard the term: object permanence.

If not, object permanence is the understanding that an object still exists even when it is not within view.

You see this with babies when you play peek-a-boo. When you disappear behind your hands, they genuinely believe that you disappear and don’t exist. They don’t realize that you are still there.

Cats understand that when you are gone, you don’t just disappear. They know that you are still out there, just not within sight.

This is usually learned by two years of age for toddlers, meaning that your cat has the intelligence of a 2-year- old.

Cats have learned quite a bit, including social cues, especially social cues. They have picked up on many things humans do and learned to communicate this in that manner.

Cats don’t actually communicate through their meows with other cats. This is one example of a social cue that cats learn in attempts to communicate with us.

They have come to realize that we communicate through our words, and so they have learned to meow to us when they want something or need our attention.

These are not the only cues that they have picked up on. They can see when we are stressed, depressed, mad, and more.

Cats have an internal clock. This means that if you have a regular work schedule, they can determine when you will be home.

You may notice this when your cat greets you at the door or follows you to the bedroom, understanding it is bedtime. They learn our schedules and ensure to be a part of it.

You can tell your cat is smart by how they follow your finger. It shows that they have focus and understand direction.

You can also test this out with a toy of theirs or a laser pointer. Their predatory skills come in handy, but it also proves their level of intelligence.

They can even begin to predict where you will be going with your finger, toy, or laser light. This shows that they are mentally strategic.

You may not realize it, but the fact that your cat can bond with you or other people shows they are intelligent. In a sense, this is a form of emotional intelligence.

Interesting READ  How Long Will a Scared Cat Hide?

When they find a person they can bond with, whether you or someone else, even if it is another pet, they show that they can maintain a deep relationship.

Which cat breeds are the smartest?

Not all cat breeds were created the same. Each breed has specific traits like aggression, stubbornness, activity level, and intelligence. So which ones are considered the smartest? Here are the top breeds:

If your cat’s breed is not on this list, it doesn’t mean your cat isn’t intelligent. These breeds’ average intelligence just ranks higher than other breeds.

Can I teach my cat tricks?

Yes! You can teach your cat tricks just like you can teach a dog tricks. The biggest obstacle you will go through is their headstrong behavior.

You will need to figure out what motivates your cat. There are many options to choose from, like treats, catnip, or their favorite foods. Even something as simple as praise can work.

When they do the trick without realizing it, you can also praise them for the trick. This will instill the name of the trick, and your cat will soon understand the command.

It may take more time and patience than with a dog because a dog is more adamant about getting praise from you. Try for ten minutes a day, and eventually, you will improve.

Tricks that I can teach my cat

There are many tricks out there that you can teach your cat. Some of the simple tricks include the following:

You can eventually teach more complex tricks once your cat gets these down. Some of the more complex ones include:

You may even end up teaching them tricks that normally people do not teach a cat. This could include the concepts like going outside, getting their leash, and so much more!

If you are on any social media platform, you may have seen pet owners employing buttons to help pets communicate with their owners. This includes cats.

You can teach your cat to start communicating to you its needs. Once your cat understands what the buttons are for, you can start implementing new buttons.

It should take your cat about one to two weeks to learn a button. But your cat may catch on quicker than others.

To reiterate what the buttons mean, ensure that you are using the buttons in return to communicate to your cat. This will help them remember what each button means.

Cats are intelligent creatures. It is really hard to say how smart they are, but with technology and new ways to teach concepts to your pet, scientists may be able to give a more accurate reading of their understanding.

Why Do Cats Isolate Themselves To Die?

Cat Peeing In The House After Getting A New Dog. Help!

Why Does My Cat Sleep On The Corner Of My Bed (6 reasons!)