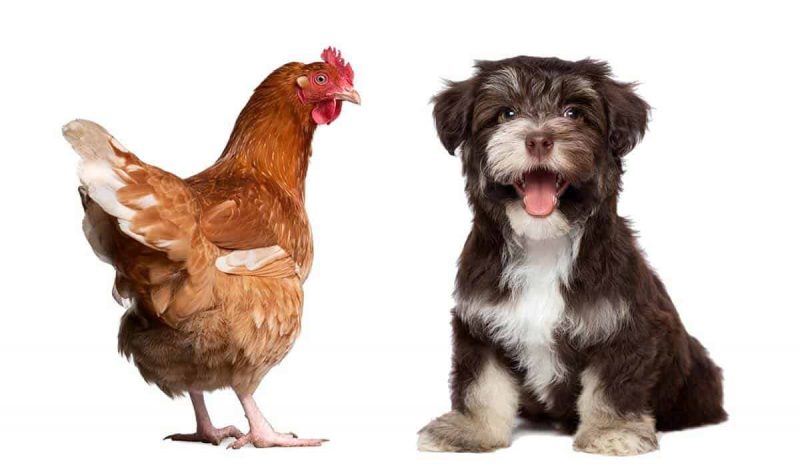 Chickens make the best pets, and they’re affectionate, gentle, and quite cuddly. But there is one more thing that makes them better than other pets – they’re clever and intelligent.

People don’t usually talk about the intellect of birds, especially chickens. Most view them as dumb birds, which have no talent and skills to do anything else, unlike most birds.

But this article has everything to prove them wrong.

We know, comparing chickens with dogs might sound absurd, but you can only know about the intellect and brainpower of these birds when we compare them to the species believed to be one of the most responsive and most brilliant of all animal breeds – dogs.

So, how exactly clever are chickens compared to dogs? Let’s find out…

How Smart Are Chickens?

There are numerous traits and characteristics of chickens due to which they are deemed as intelligent birds. You’ve probably heard the term “bird brain”, which is used to describe how foolish and dumb a person is.

This is mainly used because of the small brain size of chickens. However, even with their small-sized brains, chickens possess some unique and interesting traits that make them intelligent and bright birds:

Delayed gratification or satisfaction refers to delaying any reward or pleasure or postponing any gain or favor. This characteristic in chickens makes them intelligent birds who don’t expect rewards right at that particular instant. This is because of the patience factor chickens have, which enhances their self-control.

What does that mean?

It means you won’t be needing to reward your chickens upon doing a good job or desirable behavior, and they won’t be expecting one either. Unlike dogs, who expect treats and rewards upon tricks or doing anything desirable, chickens might even refuse food as they know they’ll be getting more later on. Moreover, dogs can’t really be taught how to resist rewards as much as chickens.

You might think of chickens not being able to recognize other animals or even humans. But here’s where you’re wrong- several studies and research have proved that chickens, just like dogs, can recognize humans from one another, as well as chickens.

It is said that chickens can recognize up to 100 faces and are also able to associate their negative and positive experiences with those faces. So, if you own chickens, your chickens will most definitely differentiate between you and your family members.

Also, chickens are known to recall and consider their prior experiences and knowledge to solve complex situations and tasks of the present.

This is the understanding of the existence of an object, even if it is taken away. Let’s take an example- you show your chicken a cricket ball and then hide it.

The chicken will still understand that the object is shown to them still exists somewhere, even though they can’t see it. The interesting fact here is that not even children can have this understanding until they’re a little older, but chickens do!

Chickens are known to have very robust and vast abilities that make them comparable to human toddlers. This is because, just like adolescents, chickens have the ability to learn and grasp things very quickly.

Interesting READ  Can My Dog Get Sick From Licking My Feet?

A study by Dr. Christine Nicol in “The Intelligent Hen” stated that chickens could master those skills that can take small children months (and even years!) to accomplish.

Another interesting fact about chickens is that they can indeed do simple math. This may include simple additions and subtractions of objects in front of them or choosing an area with a greater or lesser number of items.

Dogs are known to be man’s best companions, mainly due to their loving and strong personalities and ability to form friendships and relationships with humans. However, chickens aren’t any different.

Chickens tend to act and behave differently in front of certain individuals, but if your chicken(s) see you as their owner, they will create a special bond with you.

If an individual is caring and loving towards a chicken, that chicken will most certainly form a special bond with them. Because of their highly social nature, they quickly feel attached to their owners in no time.

They know their names

Yes, you read that right.

Chickens are smart enough to understand their names, just like dogs do. This is why people tend to name their chickens! Chickens respond and show up whenever you call out their names.

Chickens can tend to be incredibly protective of their own, and this trait adds to their intellect, as chickens can differentiate between things and have a sense of their belongings. Therefore, just like dogs, chickens will be overprotective not only for their eggs and chicks but also for their owners and family members.

Most people view chickens as dumb birds who can easily be fooled and tricked. However, studies have shown how cunning and clever chickens can be. Manipulation is a common characteristic in these birds, as they can tactically trick one another to get what they want.

A feature in The Startling Intelligence of the Common Chicken in 2013 talked about how deceptive and clever chickens are, as these birds have those unique communication skills they use for their primates.

A study by the University of Bristol stated how chickens could think and plan. They also apply logic, which means chickens don’t always rely on their instinct.

Chickens use their brains to think logically and to act accordingly. Their conclusions and plans are based on solid cognitive thinking.

This study was supported by an experiment in which appetizing and unappetizing food in different colored bowls were placed. When this food was given to the chicks, the hens were seen to warn these chicks about the food.

These hens helped the chicks decipher which food was palatable and which one wasn’t.

This study shows the chickens’ ability to process information and their surroundings and assess situations carefully. This shows how chickens are smart enough to rely on their senses and use solid cognitive thinking.

Although chickens might be seen to not show any emotions, you’d be surprised to know that they have an immense sense of empathy. Besides that, chicks also portray jealousy, which is quite common in most animals kept as pets.

When we talk about emotional intelligence or empathy in animals, we are talking about how a particular animal can connect and share the feelings of other animals. In the study discussed in the previous point, it can be seen how chickens possess a sense of care and protection towards other beings.

One of the reasons why chickens do not show much empathy as dogs do is because chickens aren’t really exposed to much human interaction, unlike dogs are.

How Smart Are Dogs?

Let’s now take a look at how intelligent dogs are. Dogs shouldn’t be underestimated when it comes to their intellect and astuteness, as they are regarded as one of the brightest companions of man. Usually, dogs are said to have intelligence as that of a two-and-a-half-year-old baby.

Apart from learning tricks, dogs are also able to understand up to 250 words. This includes commands and names of other people and objects.

Moreover, dogs are also able to understand human emotions. Dogs also can read and react to human emotions by analyzing their body language and expressions. This makes dogs understand and adhere to the commands of their owners quickly.

However, it is also important to note that dogs aren’t the smartest animal out there. Even if chickens aren’t as smart as dogs, numerous other species and mammals are regarded as more intelligent than dogs.

Furthermore, we actually regard canines as the ultimate most intelligent human companion out there because of the dog’s ability to partner with humans easily.

Chickens vs. Dogs – Who Is Smarter?

Although chickens aren’t probably the most intelligent bird in the nest, they are indeed on par with other intelligent species, such as dogs. However, there are no definite conclusions as to if chickens are smarter and more intelligent than dogs.

But, chickens have been able to outperform most dogs and are also believed to possess those cognitive skills and abilities of a 4-year-old toddler!

Cognitive abilities, especially cognitive thinking, are pretty impressive in chickens, because of which they are known to be one of the most brilliant domesticated birds. But, just because a chicken possesses certain skills and traits doesn’t necessarily mean they are more intelligent than dogs. The same goes for dogs if we compare their abilities and characteristics with chickens.

Chickens can learn to adapt pretty quickly. As such, they can even learn how to use a dog door!

Why Do Dogs Show Their Teeth When Playing? Surprising Facts!

How To Make Pugs Fall Asleep

Why Does My Dog Smell Weird After Getting Neutered?