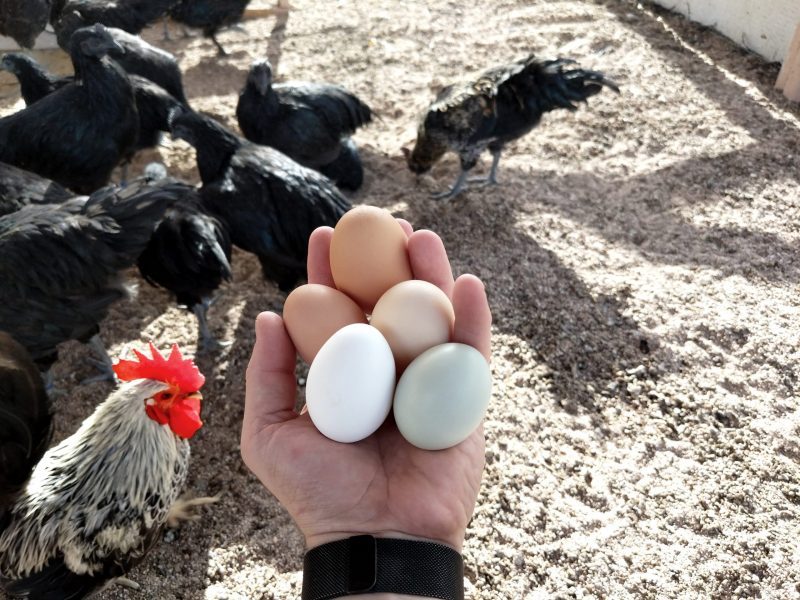 As someone who may be looking to expand your flock, you may be wondering, “is one rooster enough?” and “how many eggs can a rooster fertilize at once?”

In this article, we will discuss the proper ratio of hens to roosters and exactly how many eggs one rooster is capable of fertilizing at one time after mating. It is important to remember not to count your chickens before they hatch, as there are many factors that go into growing your flocks, such as nutrition, ratio of hens to roosters, and habitat.

In answer to the main question, “how many eggs can one rooster fertilize at a time”, you should expect 10-14 fertile eggs from one mate.

A rooster’s sperm can last up to 2 weeks inside a hen’s reproductive system. If she is a mature hen that lays eggs daily, that makes about 14 eggs.

My Chickens Mated Today, When Will I See The First Fertile Egg?

Chickens can lay unfertilized eggs when they are not mated. If your chickens mated for the first time today, the earliest egg that’s fertile would only come either tomorrow or the day after.

The reason for the delay is because It will take up to 25 hours for today’s sperm to fertilize the next egg inside the hen’s body. During the fertilization process, the egg yolk can only be fertilized within the first 15 minutes, directly after being dropped into the oviduct.

The yolk is then formed in tissue bags, called follicles. The largest yolk yields first, followed by the second largest the following day, and so on. Once the largest yolk is released from the follicle, it is caught by the infundibulum, sending it to the oviduct, where fertilization occurs.

All of this happens within a matter of 15 minutes. If a developing egg has already been through this process in the hen’s body before mating occurs, this egg will not be fertile even if it was laid later.

Interesting READ  Why is my chicken shivering and shaking its body?

In other words, if your chickens have mated on Monday, the earliest your hen will lay a fertile egg is on Tuesday or sometimes even Wednesday. So, don’t expect same-day delivery!

How Many Fertile Eggs Can Result from a Single Mating?

As sperm remains active in the hen’s oviduct for up to two weeks, she can lay up to 14 fertilized eggs from one single mating. After mating and the transference of sperm, the yolks that are growing inside the ovary will drop in order of size, where they will join the sperm in the oviduct.

The yolk is then fertilized. A hen can also store sperm from more than one rooster at a time.

However, it is important to remember that although an egg that has been laid may be fertilized, a chick will not develop unless the egg is either moved into an incubator or the hen is ready to incubate her eggs.

How Do You Ensure The Eggs Your Hens Are Laying Are Fertilized?

Before your hen lays her clutch, approximately 12 eggs, and begins the incubation process, you can check the fertility of the eggs without breaking them by completing the process of candling the eggs she has already laid. Candling an egg is the process of taking a bright light, or a lit candle to the bottom of an egg, to see what is inside.

As you can see in the photos below, the left egg is unfertilized, and the right egg appears to be fertilized, with a growing embryo inside.

How Often Should Your Chickens Mate to Ensure Constant Fertility?

Hens can also store more than one rooster’s sperm at a time. However, it is also important to keep in mind that she may reject the sperm of the weaker, low-ranking rooster to try and produce stronger, healthier chicks from the top rooster.

Interesting READ  Why Are My Chicken’s Wings Drooping?

How to Improve The Fertility of Your Chickens?

The first thing you need to ensure is that you have a clean, healthy habitat for your chickens, including the proper diet required for regular mating, laying of eggs, and growth of young chicks. A healthy diet for chickens requires:

A rooster is matured to start mating from around six months old. A single rooster can mate up to thirty times a day, which is why the hen to rooster ratio is so important, to prevent overbreeding and unneeded stress on your hens.

Once a hen has been mated by a rooster, she can store his sperm in her oviduct glands for up to two weeks, which means for every yolk her ovary drops, approximately once a day, they can be fertilized for up to two weeks after one mating session.

To promote consistent mating between your hens and roosters, it is important to remember:

Will a Rooster Kill a Hen? Shocking Truth!

Why Are My Chicken’s Wings Drooping?

Why Does My Rooster Crow All Day? (9 Funniest Reasons)

What Time Do Chickens Go to Bed? Explained!