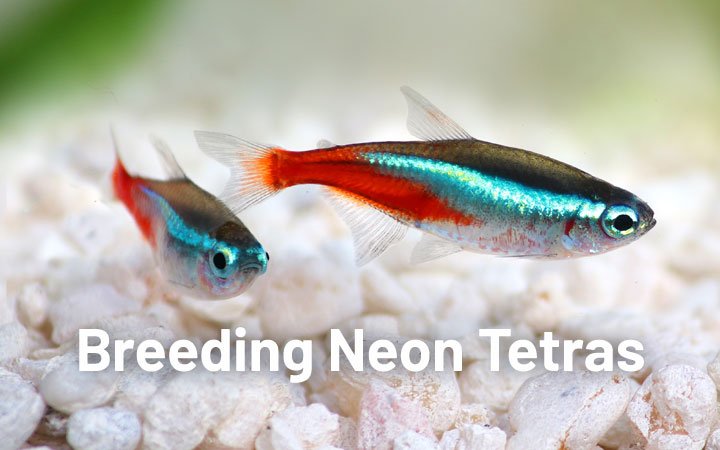 When fish keepers visit a local pet store to purchase stock, a kaleidoscope of freshwater options will greet them. These fish will, more often than not, be native to equatorial locals.

Fish on sale in a typical pet store will most likely not have been harvested from these tropical habitats, however. Most fish sold in the pet trade are bred in captivity.

Breeding fish in captivity is a practice that requires patience, ingenuity, and determination. Each species demands its own specific list of conditions in order for breeding to flourish, with some types of fish being easier to breed than others.

Tetras lay from fifty to over ola hundred eggs. Many of the eggs will prove non viable before hatching. A successful breeding cycle for tetra species can result in as many as twenty to fifty fry or more.

GIF
Contents
I) How To Breed Tetra Fish For Babies
II) How Can I Try To Ensure That I’ll Get More Eggs From A Breeding Season?
III) Why Do Some Eggs Develop And Others Don’t?
IV) What Can I Do If I Suspect That My Tetras Spawned In The Community Tank?
V) Conclusion

How To Breed Tetra Fish For Babies

Tetras may be slightly more difficult to breed than other common freshwater species in the hobby. Fish who give birth to live young, such as swordtails and mollies, may be arguably easier to breed than egg layers like tetras.

Breeding tetras will expel eggs throughout the tank, and the eggs sunk to the tank bottom. There are a number of factors that contribute to the total amount of successful fry from this point on.

Keeping The Fry In Mind 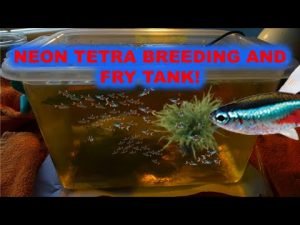 Anyone wishing to breed tetras should approach the project with a focus on the success of the fry, or baby fish. In order to provide fry with as much support as possible, fish keepers will need to complete a number of tasks before preparing the fish for breeding.

Prior to breeding, fish keepers must obtain a breeding tank. This can simply be a spare one or two gallon tank.

A breeding tank can not only serve as a calm place outside the community tank for breeding tetras, but also a nursery for tetra fry. To prepare the breeding tank, place a material along the bottom of the tank to serve as a soft substrate.

Java moss, spawning mop, or soil that has been allowed time to settle can serve as substrate substrate. Including a plant in the breeding tank scape can give eggs an additional surface on which to settle.

If freshly laid eggs have no place on which to settle, they will be left exposed to hungry adults.

The number of viable eggs produced during a breeding season in captivity can be increased by including a sponge filter, a heater, and a thermometer. Keepers must alter the tank temperature to trigger egg laying.

You can lower water temperature slightly in order to mimic the rainy season during which tetras breed in the wild. It may be helpful to prepare the breeding tank when doing a water change.

The water in the breeding tank should include a large amount of community tank water, although it can be topped off with properly conditioned new water.

Do also check out our popular post: Can Neon Tetras Live In Cold Water?

Breeding behavior will begin with tetras under the right conditions. These conditions must be introduced in order to mimic the rainy breeding season in the tropical habitats where tetras live.

During this time of year food is plentiful, and temperatures and pH levels are low. 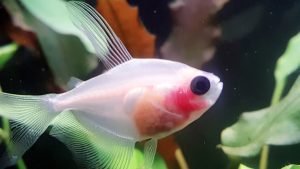 More frequent feeding can begin a few days before a keeper is ready to move breeding fish to the breeding tank.

Within a few days of this new feeding schedule, the abdomens of female tetras may appear to have grown significantly in size. Once a keeper suspects that a female has produced eggs, she can be moved to the breeding tank along with a suspected, thinner male.

Unpracticed keepers may wish to add more than two tetras to the breeding tank to ensure a higher possibility of breeding.

A fish keeper can then allow the fish to rest in a darkened tank for at least 24 hours.

Keepers should check on a breeding tank periodically and monitor the size of their tetras closely. If tetras appear significantly thinner, breeding may have occurred.

If the fish seem to look the same a keeper can leave them for longer. With the help of a flashlight and a magnifying lens, a keeper may examine the bottom of the tank to look for tiny tetra eggs.

Once a keeper suspects that tetras have spawned, the adult fish must be returned to the community tank immediately. Allowing the mature tetras to remain in the breeding tank exposes tetra eggs to the danger of being consumed.

Many breeding projects can result in twenty to over a hundred eggs. Of these eggs, many will not hatch.

Keepers have estimated that as many as two thirds of the eggs laid during one tetra breeding project on average may not hatch. These eggs would have been unviable for a number of reasons.

Due to location upon release, certain eggs may go unfertilized, while others may have been duds at the time of laying.

Eggs may not be immediately visible. Tetra eggs are very small, less than a millimeter in size, and clear in color.

If possible, it is best practice to leave the breeding tank for at least 48 hours without being disturbed. Fish keepers should monitor the tank until free swimming fry are visible, perhaps with the assistance of a magnifying glass for smaller species.

A keeper should try not to disturb the tank water during this curtail incubation time. A peaceful incubation period can mean the difference between twenty healthy eggs and fifty healthy ones.

Some viable eggs that are undisturbed can take as little as twenty-four hours to develop. These new fry will swim through the water.

Fish keepers have argued that, while dramatic movements caused by more powerful, backpack filters, or keeper disturbances can hinder egg development, but that the delicate movement of siblings may actually stimulate egg hatching.

Novice keepers need not fear that new fry will eat their unhatched tank mates. Tetra fry are very small, and are, in fact, too tiny to eat tetra eggs.

New tetra fry actually require specialized food prepared by a fish keeper before breeding has even begun. Even if a larger fry hatches, it will not pose a danger to eggs.

Fry emerge from their eggs having received nutrients from a yolk and will not immediately be hungry.

How Can I Try To Ensure That I’ll Get More Eggs From A Breeding Season?

Fish keepers have a few options when striving for larger egg numbers. Consideration can be taken when picking females to remove from the community tank to be placed in a breeding environment.

If a keeper has been successful with a female previously, and she is still young, she might be a great option when selecting a breeding group. Another way fish keepers can push their potential number of tetra eggs from around twenty to over a hundred is to include more than one female.

Why Do Some Eggs Develop And Others Don’t?

There are innumerable reasons as to why some eggs don’t develop. Like many other aquatic animals, tetras lay an enormous number of eggs with only a fraction surviving.

Some eggs laid will be unviable. These eggs may have had genetic issues. It is important for keepers to monitor that tank throughout the hatching period.

What Can I Do If I Suspect That My Tetras Spawned In The Community Tank? 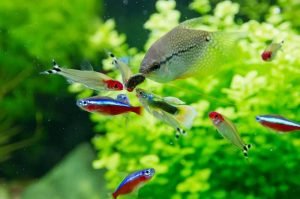 If a keeper has observed tell tale signs of spawning, eggs may be visible in plants and on the very top of the substrate. A keeper could remove the materials and eggs as quickly as possible and place them in an extra tank.

Breeding tetras can be an intensive, demanding project to undertake as a fish keeper. The activity requires a steep level of monitoring to maintain proper temperatures and pH levels. Keepers can take steps to ensure that the average number of between twenty and a hundred tetra eggs laid by each female contains a large group of viable eggs. This requires planning and preparation. However, the pay off of a new school of possibly dozens can be an exhilarating prospect for any fish keeper.

Will Different Tetras School Together?

Why are water changes not lowering nitrates in my fish tank?

How Long Can A Betta Fish Live Without Food?