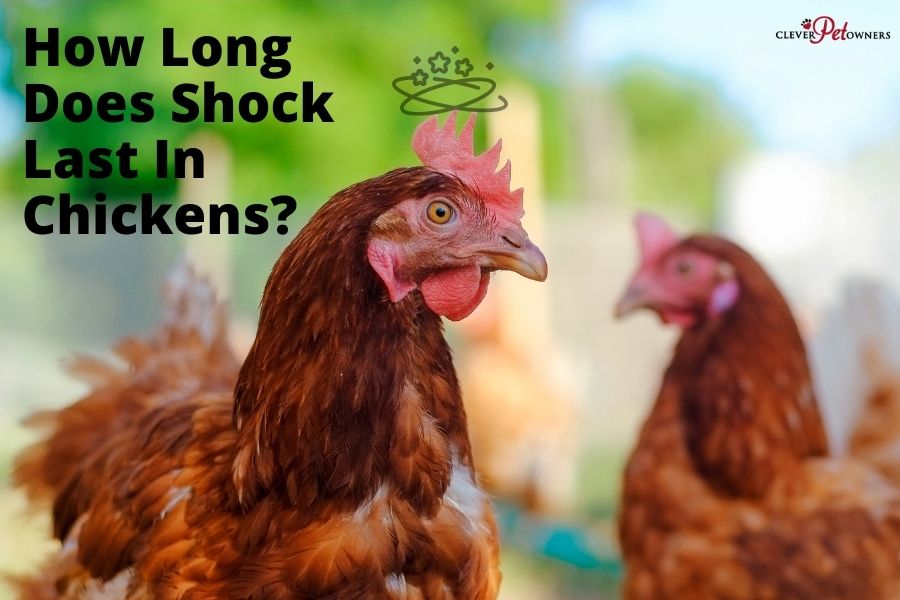 As a chicken owner, one of the scariest events that could happen is an attack on your flock. An attack of any severity can cause lasting effects on your chickens.

A traumatic event can adversely affect your flock’s way of life, health, and egg yield. Circumstances happen, but the question is, how long do the effects of shock last in chickens? Is there anything you can do to help them?

Shock in chickens can last anywhere from a few hours to days. In some cases of severe injury, chickens may never recover from the shock.

However, there are some factors that can impact the length of time your chicken is in shock. It is important to note how to care for a chicken in shock because your care may be their last hope.

What causes shock in chickens?

There are four main factors that affect the length of time a chicken can remain in shock after experiencing a traumatic event.

Chickens have many predators, domestic and wild. These predators can be active both day and night.

If your flock is attacked, they may suffer from physical injuries and emotional injuries, both of which can cause a chicken to go into shock.

Other wounds caused by trying to escape the predator, such as being clawed and getting caught in their surroundings, can also cause bacterial infections and blood loss. This can cause a chicken to enter a shocking state.

Depending on the severity of your chicken’s wounds, they could remain in shock for up to a few months after the attack.

Psychological effects caused by a predator attack can also severely affect your chicken’s behaviors and health.

It can cause them to go into shock due to anxiety, rapid heartbeat, decreased blood flow, organ failure, and breathing difficulties.

If your chicken goes into shock, they will often refuse to move or eat, which in turn causes their bodies to remain in that condition.

If not immediately and adequately treated after an attack, infection is likely to spread throughout their body.

Blood loss or infection from an injury

Chickens can become injured from several different things, such as: jumping from a high perch, landing on something when they jump down or getting caught in their chicken wire.

Blood loss after an injury can cause slowed heart rate in your chicken, causing it to go into shock. An infection can cause septic shock, an infection of the blood.

Interesting READ  How To Introduce New Hens To A Flock

Signs of sepsis include vomiting, diarrhea, loss of appetite, shaking, and fever.

If your chicken is suffering from blood loss or infection, they are more likely to remain in shock for a longer period and, if left untreated, can lead to death.

Cold shock in chickens can occur when outside temperatures drop dramatically. Your chicken’s age, weight, diet, and health affect their recovery time from cold shock.

It causes shivering, reduced circulation, and decreased immunity. Cold shock can lead to death if not taken care of right away.

Heat shock occurs when a chicken’s body cannot keep a normal body temperature, which can be due to dramatic increases in external temperatures.

It causes panting, pale comb, lethargy, and diarrhea. Heat shock can also cause death if not effectively managed.

Chickens can get poisoned by several things. If heavy metals, toxins, or chemicals, such as lead or zinc, get into their water, it can cause a chicken to suffer from blood toxicity, leading to shock.

If not treated properly and the source is not addressed, it can affect your entire flock. If not treated immediately, the shock will eventually lead to death.

How to identify shock in chickens?

The first step to helping your sick or injured chicken is identifying the cause of the change in behavior and the severity.

You can identify whether your chicken is in shock or not by considering these signs:

Shock in chickens is considered a medical emergency. Decreased blood flow, caused by shock, can cause many other health issues, such as organ failure or even death.

Signs of shock can be identified as rapid heartbeat, stunned appearance, such as frozen in a squatting position and refusing to move, weak pulse, lethargy, or if the chicken is unresponsive.

After a traumatic event, shock can cause a chicken’s heart to stop pumping properly, leading to loss of circulation, blood loss, dehydration, sepsis, or severe infection.

Chickens that become septic will often go into cardiac arrest due to the poison or infection flowing throughout their body.

The length of the effects

Emotional shock due to a close encounter from an attack on the entire flock, or an emotionally taxing event, such as a big move, can last for a few hours to a couple of days, but most chickens fully recover.

Physical injury can cause severe emotional damage for several days to months. Shock caused by illness can be deadly if not treated properly.

Interesting READ  Do Chickens Get Sad When Another Chicken Dies?

Can a chicken recover?

Chickens can recover from shock if symptoms are appropriately treated. Recovery time is also dependent on the extent and source of shock.

The health and age of your chicken before going into shock also affect the recovery time. Some chickens can recover in a few hours or days; others may never recover if they are injured or sick enough.

Steps for treating a chicken in shock

It is always best to be initiative-taking rather than reactive when it comes to our backyard animals. There are several things you can do to prevent an incident from happening in the first place.

Provide your chickens with separate, safe areas to sleep, eat, roost, and run. Put a roof on it to avoid flying and climbing predators.

Be sure to lock your coop. Two-step locks are recommended, as snakes, weasels and raccoons can get quite good at picking locks when they find a tasty snack.

A rooster helps with keeping your hens safe. Keep in mind you might end up with baby chicks. Keep your coop and run well-lit at night. Motion sensor lights are also an option.

Protecting chickens before an infestation is not a new idea. Farmers have been raising chickens for thousands of years. A small list of preventative repellents you can use are:

A clean, manure-free coop is vital to ensuring the health and prosperity of your chickens.

To avoid infections and diseases that lead to chicken shock and eventually death, ensure your coop is kept dry and clean. Clean perches and roosts regularly.

Chickens are not exceptionally good at keeping their spaces clean. They are birds! Ensure that you are regularly cleaning out their water and food troughs.

In conclusion, we can take steps to protect our chickens from being attacked or contracting illnesses that can eventually lead to shock or even death.

However, accidents happen, and it is important to be prepared in those instances.

Having a chicken first aid kit and a plan set in place can help protect your chickens from getting beyond the point of help.

Do Chickens Get Sad When You Take Their Eggs?

Do Chickens Get Sad When Another Chicken Dies?