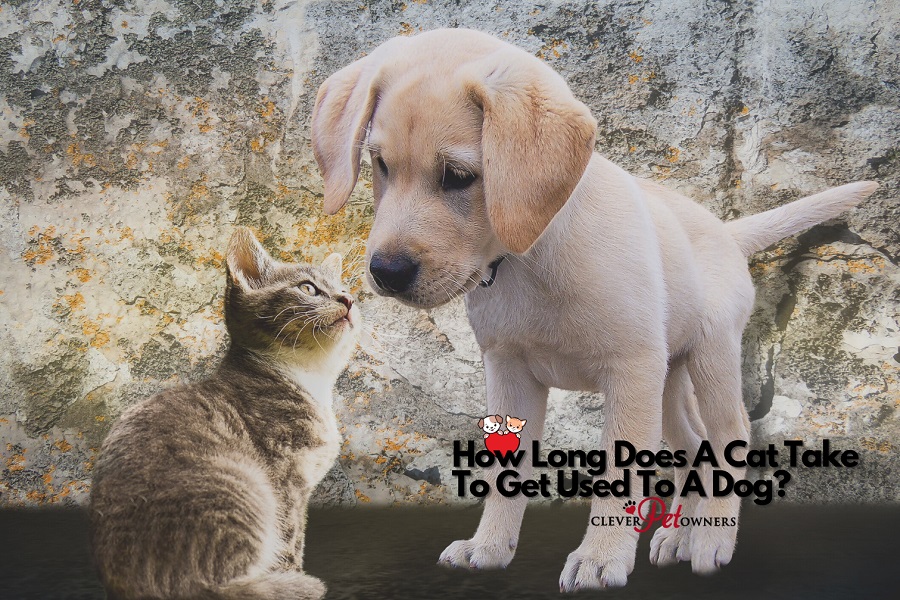 Imagine your cat has enjoyed being the center of attention in your home when all of a sudden a new animal arrives. Though, it’s not just any animal but a dog double or triple its size.

The time it takes for the cat to get used to the dog can vary depending on several factors, though experts say the average time is about two to three weeks.

Read more on the timeline for a cat to get comfortable and how to successfully introduce your two pets.

Contents hide
1 How long does it take for a cat and a dog to get used to each other?
2 How to help my cat get used to the dog?
3 What if the relationship between them doesn’t improve?
4 Conclusion

How long does it take for a cat and a dog to get used to each other?

The amount of time it takes for a cat to get used to a dog can vary for different animals.

In some cases, cats that are more social or bold can jump right into their new relationship with a dog. Other cats may take longer to warm up to any other animal, not just a dog.

This all depends on the animal’s personality, behavior, and temperament, which can be affected by many things.

The timeline itself can differ based on a few common factors:

In most cases, cats will take about two to three weeks to get used to a dog.

The average time it takes assumes that the two animals are somewhat friendly with one another and not aggressive.

If the animals seem to be adjusting to each other well, you may allow them the freedom to interact.

In other cases, animals can be cautious with new pets and take up to a few months or more to get used to them.

No matter how long it is, it’s important to be patient and avoid rushing either animal.

Cats and dogs usually have different social needs and personalities. Rushing the two animals can possibly cause anxious and unnecessary tension between them.

Even if they’re both social and friendly, it can be a good idea to slowly introduce them to each other just in case they’re wary of one another.

Consider allowing them supervised playtime after the first few weeks, but only if they’re up for it.

How to help my cat get used to the dog?

‘The American Veterinary Medical Association reported that about 25.4 percent of Americans have one or more pet cats while 38.4 percent have a pet dog.

We sometimes use the term fighting like cats and dogs in belief that the two can’t coexist under one roof. Yet, more and more households are beginning to combine the two animals together.’

Many pet owners believe cats and dogs aren’t destined to cohabitate well, despite many households having multiple pets.

It’s possible for the two species to learn to live in harmony. All animals have different behaviors and personalities, and some get along better than others.

The key is not necessarily whether or not the two species are compatible. It’s about having a plan for when they meet and being patient in the process.

Interesting READ  Why does my dog keep barking at the corners of the room?

During the first few weeks, it’s essential to keep your cat and dog separated.

The general consensus is two to three weeks of separation before the cat and dog are allowed to meet face-to-face.

They should be separated into different rooms for the entire time, and the cat should have everything they need in one place.

Put the cat’s litter, food, water, and toys all in the same space, while the dog occupies the other.

They should only be able to smell and hear but not see each other.

If either animal has aggression or anxiety, they may need to be separated for a longer period of time.

Make sure the cat is very comfortable in his/her own private space. They should feel like it’s theirs.

The cat should have their favorite toys or comforting objects (like a bed, blanket, or pillow) and should have different high spots to climb, perch or hide.

Ideally, their space should be somewhat quiet and non-threatening. If your home tends to be a loud environment, it’s good to keep the cat in a place away from the commotion.

A room at the end of a hallway or basement can both work well in this case.

Make sure the dog is calm.

Before introducing the dog and the cat, make sure the dog has gone for exercise recently, so he/she is not riled up.

If the dog has too much energy, he/she can get too excited by the sight of a cat and accidentally hurt it.

This is especially true for a puppy or a dog that has a tendency to chase small animals.

During their first meeting, make sure both animals are on leashes and kept at a safe distance.

After a few calm interactions, you can allow both animals some freedom to get closer.

If either the cat or dog has a prior history of not getting along with other animals, make sure to monitor their behavior closely.

Wait for the cat to approach first.

After the dog and cat have met a few times and are a little more familiar with one another, let them go at their own pace.

The cat, in particular, may be curious about the dog but not yet willing to sit close or sleep near them.

Make sure both animals aren’t forced to interact and allow them both space, especially if they still seem wary of one another.

Most dogs will eagerly approach a cat, which your cat may not like. Because cats tend to warm up slowly to other pets, allow the cat to approach the dog first.

This means letting the cat come out of their safe space on their terms and not trying to force an interaction face-to-face. Playful swatting and harmless curiosity are normal and can usually be expected.

However, if the curiosity towards the dog appears territorial or aggressive, you must separate them again.

What if the relationship between them doesn’t improve?

Interesting READ  Can Border Terriers Swim? Do They Like to Swim?

It’s possible that over time the cat and dog may learn to tolerate without animosity but may never be friendly to each other.

Typically, even the most aloof personalities will eventually come around to other animals in the house.

Whether that means becoming cuddle buddies or allowing the occasional friendly play is entirely up to the two animals.

Be sure to manage your expectations on this relationship, as some animals may not be destined to become best friends.

Sometimes, the best a pet owner can hope for is tolerance of each other. In some rare cases, the cat and dog may never get along well.

Sometimes, animals with a negative history or fear of other pets can continue to exhibit poor behavior.

If the dog and cat aren’t getting along well, or if one of the animals becomes dangerous to the other, you may consider other options.

Look into behavioral training for one or both of the animals

Some cats or dogs may improve by attending training sessions with a pet trainer.

Practicing with a professional may develop positive behavioral changes while unlearning bad ones.

While behavioral training can be particularly helpful for younger animals, this option can be beneficial regardless of your pet’s age.

Ask trainers about their experience with your pet’s specific situation, as some trainers may have a focus on different areas of behavior.

Once your pet begins training, continue with positive reinforcement at home. Make sure to encourage good behavior and have patience in the learning process.

Consider re-homing one of the animals.

If you believe the situation has gotten out of hand or that the animals may be threatening each other’s safety, it might be time to consider re-homing.

While this is not an easy decision to make, it might be the best one for the well-being of each animal.

That said, you should not consider rehoming unless you have exhausted all other options.

If this seems like the best choice for you and your pet, make sure to research where your pet will go.

You may consider fostering options or utilize an adoption service in the process. You may want to seek further advice from your vet on the matter before making a choice.

Introducing your cat to a new dog will be an adjustment for everyone.

In some cases, both pets can socialize quickly and seemingly become comfortable with each other overnight. Other times, either the dog or cat may be fearful of the other and keep their distance.

Either way, it’s essential to separate the animals for the first few weeks, so their only interactions involve smelling and hearing each other.

Monitor the first meetings to ensure the animals are getting along well and developing trust.

Give the animals enough time and space to adjust so that eventually, they may grow to love one another.

How Long Does It Take For A Dog To Adjust To A New Dog?

Why do cats cover their eyes with their paws when sleeping?

How To Get My Border Terrier To Live With My Cats

Why Is My Cat So Affectionate In The Morning

How To Litter Train A Kitten

What Does It Mean When A Cat Wags Its Tail?