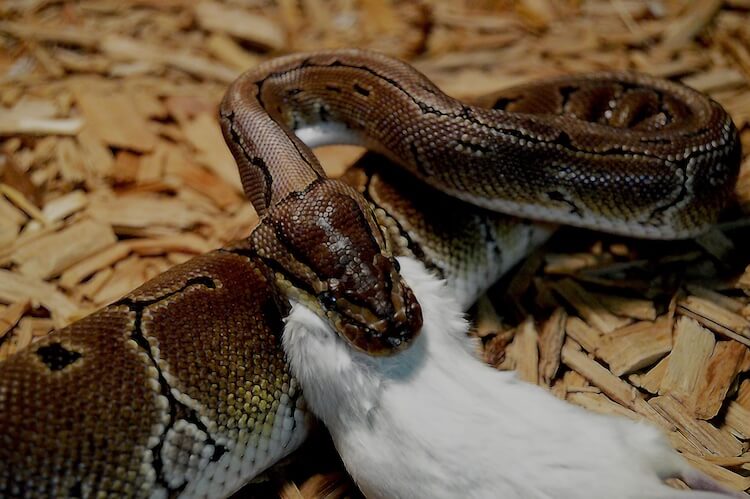 Sometimes our pet snakes do not always feel like eating right away when we present them with food. When this happens, we may be tempted to just leave the dead prey inside their tank.

While there is not anything inherently wrong with leaving feeder items in a snake’s tank for a few hours until it decides to eat, the food needs to be taken out and thrown away if it has not been swallowed by the following day.

However, it is also wise to use discretion when leaving out thawed food overnight, as certain factors can cause frozen prey items to spoil quicker and become unsafe for your pet. In today’s article, we will discuss how to better preserve thawed rodents for pet snakes and what you can do to help avoid leaving prey out for too long.

When Should You Remove Unwanted Dead Rats From The Snake Tank?

To play it safe, uneaten rodents and other pre-killed prey items should be removed from a snake’s enclosure within a few hours or by the following day if it was placed in the tank at night. Waiting any longer can cause the food to spoil, which will be harmful to your snake’s health if it decides to feed on the prey item by then.

However, there are a few things to keep in mind that can help keep dead rats and mice fresh for longer if you plan to leave them with your snake past the initially planned feeding time.

Four Tips to Ensure The Freshness of The Dead Rat

The first step to maintaining a frozen rat’s freshness begins with how it is kept while it is still alive and how it is packaged, so ensuring that you are purchasing from a quality supplier will be key.

Make sure that you are getting your pre-killed rodents from either local breeders or pet supply stores that understand that their items will specifically be used to feed pet reptiles.

These chains will understand the importance of raising their rats in a sanitary environment and package frozen rodents in leak-proof bags that allow the meat to stay fresh for longer. Checking the reviews of frozen rat supply chains to see what other snake keepers are saying is a great way to pinpoint which company’s products will work best for you and your snake’s needs.

If you feel that your snake will decide not to eat during its usual feeding time, it is best to prepare frozen food in a way that will help maintain its freshness for a prolonged period.

The common thawing technique that involves placing the rodent in warm water should not be considered for known picky eaters. While this process can help snakes sense their prey better, the extra warmth will also degrade the freshness.

Interesting READ  Why Would a Snake Bite Itself?

According to the Food Safety and Inspection Service of USDA.gov, placing any kind of meat or prey items in the refrigerator after being in the freezer is one of the safest ways to slowly lower their inner temperature.

Frozen rats will generally thaw completely in about two hours by using this refrigeration method.

Six months is typically regarded as the threshold for how long smaller meats can be safely stored in a freezer before going bad, including rodents like rats. The meat will be much more susceptible to bacterial growth if it is kept past this expiration period.

Any longer than six months means that the risk of food poisoning increases dramatically, so anything in the freezer kept past this period should be thrown away.

If you must leave a dead rodent inside your snake’s tank, try to avoid putting it anywhere near the basking spot or other heated areas of the enclosure. The warmth will cause the prey to spoil much quicker than at room temperature as bacteria will be able to reproduce at a faster rate.

Not only will this make your snake’s enclosure smell terrible for some time, but it will also be a health hazard for both you and your pet. For best results, keep the prey near the cool side of the tank away from any overhead lights, heated rocks, or heating pads kept under the tank.

Feed at The Right Time to Avoid Leftovers

Before you continue, we strongly encourage you to read this related article on How often should you feed a ball python.

When a snake sheds, it tends to feel more irritable and will probably have a decreased appetite. In addition, a snake’s senses will not be as sharp during this time, making it harder to detect food, and you are more likely to find uneaten rats in their enclosure past its usual feeding time.

It is best to wait until snakes have entirely shed their skin and moved around and are comfortably active again before attempting to feed them.

Snakes will only defecate once they are done digesting their most recent meal. Feeding times depend on how long it takes for snakes to poop, and snakes should typically only be offered food once they have finished excreting what they ate last.

This way, the snake will be more energetic and willing to eat again, and you won’t have to worry about waiting long for your pet to take pre-killed prey.

Feed During Your Snake’s Favorite Hour

Feeding when your snake is most lively, such as when it is eagerly exploring its enclosure, is a great time to try presenting it with freshly thawed prey.

If your snake is up and about and sensing its environment, you have a better chance of enticing it to take notice of food. For snakes that feed more than once a week, try to feed at the same time during feeding days so that a semblance of a routine can be established. Note that this will not work for all snakes, as older snakes eat less, and some species will only need to be fed once a month at most.

Can You Refreeze Leftover Dead Mice?

The short answer is no. You cannot refreeze dead rodents and expect them to retain their freshness or assume that they can be rethawed later.

This is because the food has already undergone drastic temperature changes from its first thaw, which will put it closer to the ‘Danger Zone’ range. This range is where bacteria will begin to grow much more rapidly and make the meat unsafe to eat.

The best course of action here will be to just toss the uneaten prey item and use a fresh one for the next scheduled feeding time.

Can You Leave The Dead Rat Overnight?

As we know by now, the answer is yes. You may leave rats and other thawed prey animals overnight without causing issues if you properly prepare to do so. That being said, it is best to determine the quality of the dead rodent before you plan on leaving it in your snake’s tank for an extended period.

Some questions to consider when leaving prey overnight include:

If the prey has been frozen for close to or over six months by then or has already been thawed for a few hours, it should be discarded.

What Happens When You Leave The Dead Rat in There for Too Long?

If a rat, mouse, or other prey item is left at room temperature for too long, it will begin to spoil. Your snake’s tank provides a moist, warm, and humid habitat that will accelerate the process of bacterial growth, as we have previously discussed. If the food is left in this environment for too long, it will be too risky to allow your snake to consume it.

It is a good idea to watch for vomiting and other odd behavior if you are concerned that your snake may have eaten something rotten. If this concerning behavior persists, call a veterinarian specializing in reptiles, as your pet may need medical attention.

Will Snakes Recognize and Reject a Rotting Rat?

Unfortunately, no, a snake will not always be able to identify spoiled meat like we can. To a snake, anything that looks like food is food, and while a dead rat in extremely poor condition may be rejected, early signs of rotting may not be noticeable to the snake.

While wild snakes sometimes eat carrion, it is still good to remember that there are reasons that snakes in captivity live longer. Snakes need our guidance to ensure they aren’t accidentally eating a health hazard that could make them sick. This is why it is imperative to practice the tips we have discussed and to use caution when offering thawed prey that has been left out for longer than normal.