Turtles can make amazing pets, and there are so many different species to choose from. In this article, we will be talking about aquatic (or semi-aquatic) turtles, and how long they can go without water.

The word “aquatic” implies that they live in the water, but they do go on land for some time as well. This is why the term “semi-aquatic” is often used, because these species of turtles live most of their lives in the water, but a good chunk of their time is also spent basking in the sun on land.

Think of it as about 60% of their life is spent in the water, and about 40% is spent on land, give or take. Some species will spend more time in the water than others.

So, how long can an aquatic or semi-aquatic turtle go without water? In short, a healthy adult aquatic turtle can go about a week or more without water; in some cases, possibly up to a month or more, but the longer it goes, the more dehydrated it will become and the more its health will decline.

Contents
I) Factors Affecting Duration Of Turtles Going Without Water?
II) What Influence Does Species Have On The Ability To Go Without Water?
III) What About Non-Aquatic Species?
IV) Conclusion

For more than half of the day, a turtle will be swimming around in the water, foraging for food and exploring around. The other part of the day will be spent on land, basking in the sun to warm up, to absorb UVB light, and to dry out the skin and shell.

We will cover all that information in the section on basking.

When asking the question, “How long can turtles go without water?” we need to look at a few different factors: normal basking behavior, the age of the turtle, temperature and humidity of the environment, and the brumation cycle. Depending on all these factors, the answer to the question can differ. In general, however, an aquatic turtle can potentially go between one week and a few months without water.

It won’t be very comfortable, but it is possible for it to survive. 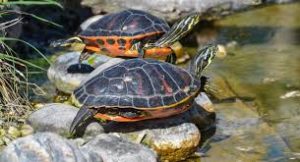 Basking is an important part of a turtle’s life, not just for temperature regulation, but also for regulating the metabolism as well as preventing some infections. Aquatic turtles actually need to dry out completely for at least a couple hours each day in order to prevent certain parasites and fungal infections caused by moisture.

A turtle might bask for only a couple hours one day, and the next day they might bask for 9 or 10 hours. When it comes to pet turtles, a general guide for basking schedules is a 12-hour day and night cycle.

Interesting READ  How to keep a Turtle Warm without a Heat Lamp?

If you have your heat and UVB lamps on for 12 hours a day, that gives your turtle plenty of time to decide when to bask and for how long that day.

Age is an important factor when thinking about how long a turtle can go without water. The younger the turtle is, the more fragile it is.

This means that hatchlings and juvenile turtles can’t survive as long without water as adult turtles can. This is because younger turtles are not yet fully developed, so they don’t have as much energy as adults.

The longer a turtle is out of water, the more energy it will need to use to survive. A small, baby turtle will probably only be able to survive a few days to a week without water, while a healthy adult turtle can survive for at least a week or more depending on the other factors we will discuss.

This is because heat causes water evaporation, even from within the body. This is why aquatic turtles alternate between water and land, because when they get too hot, they can quickly go for a swim to cool off.

Humidity works the opposite way temperature does: the more humid the environment is, the longer amount of time a turtle can stay out of water. Moisture in the air provides just that much more hydration for a turtle, even if it’s just absorbing through the skin and shell.

Brumation is like hibernation for reptiles, a period of slowing down the metabolic rate for a “resting” period in the winter. Brumation is something that mainly only wild turtles do. 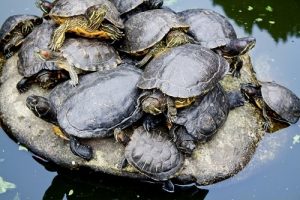 If you have a captive bred turtle, brumation will most likely not apply to your turtle because you can provide a consistent temperature gradient year-round. If you have a captive turtle that was once wild, however, it might be the case that your turtle does continue its brumation cycle, and you might change the water temperature in the winter to be colder for this to happen.

So how does brumation affect a turtle’s ability to go without water? During this process, the turtle’s metabolism will slow down so much that it doesn’t need to eat or drink for months.

It will barely even move during this period, essentially sleeping most of the time. Aquatic turtles can brumate fully underwater, burrowing underneath mud or sand, or fully out of the water buried in a hole in the ground or a pile of leaves.

Brumation can last anywhere between 2 and 5 months depending on the climate, and a turtle can spend this whole time out of the water during this process!

What Influence Does Species Have On The Ability To Go Without Water?

While the above information was about aquatic species in general, there are many different species within the category of “aquatic,” including but not limited to Red Eared Sliders, Painted Turtles, Mud and Musk turtles, and Spotted Turtles. Red Eared Sliders are one of the hardier turtles that can survive for a long time in less-than-optimal conditions, including going a longer period of time without water.

Mud/Musk Turtles and Spotted Turtles are species that live in more shallow water, and they can stay out of water for a much longer time than Painted Turtles and even Red Eared Sliders. It’s been observed that Musk Turtles have been able to spend several months at a time on land, not even during brumation. 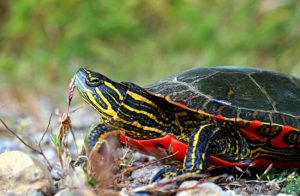 What About Non-Aquatic Species?

Non-aquatic species of turtles may not live in the water, but they still need a source of water to drink from and soak in. A box turtle, for example, will live its life entirely on land, but it will need to soak in a shallow amount of water every once in a while, as well as a relatively humid environment to stay hydrated.

They can also get some water through different foods they eat, such as worms. Like aquatic turtles, land turtles can potentially survive at least a week without water, depending on temperature and humidity; and they go even longer without water during brumation.

In general, though not ideal, turtles can go between a week and a month without water if they are not currently in brumation. This depends on other factors like the turtle’s age, temperature and humidity of the environment, and the turtle’s species.

Different species require different water needs, as well as different environmental needs such as humidity. Even though turtles can potentially live up to a week or a month without water, it is certainly not ideal, and surviving does not equal thriving.

The longer a turtle goes without water, just like any other animal or human, the more dehydrated and unhealthy it will become. Some signs of dehydration in turtles are closed or sunken eyes, wrinkled skin, fatigue or not moving much, and low body weight among other things.

It’s a good idea to provide enough water at all times to prevent this from happening, but if your turtle is showing any of these signs, it’s best to see a vet to get proper treatment.