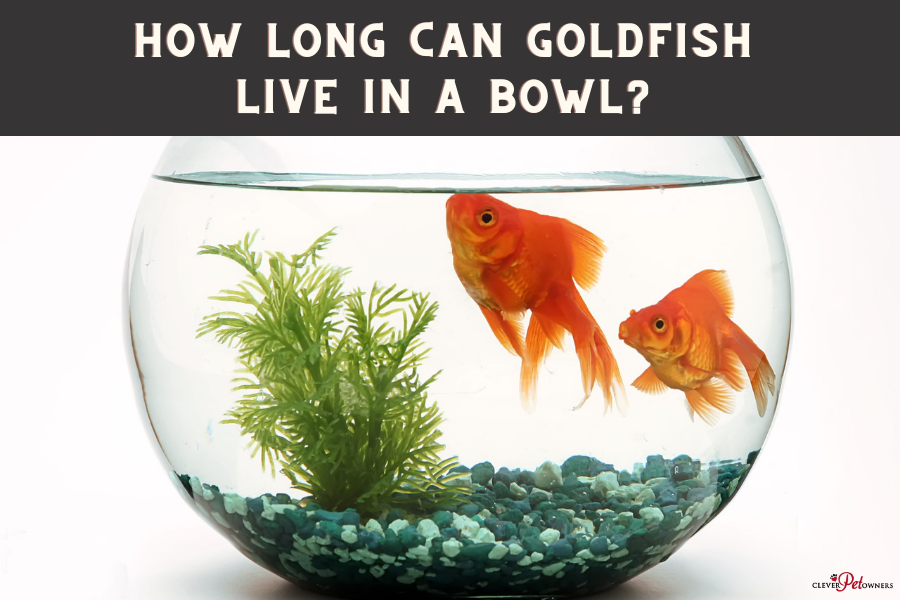 For many years, goldfish have been kept in clear glass bowls. The image of a goldfish in a bowl is so universally accepted that these spherical glass containers, which often hold no more than a gallon of water, have come to be known as goldfish bowls.

For the first-time aquarist eager to set up the perfect goldfish bowl, it may come as a disappointment to learn that the popular image is misleading.

Fishbowls are simply not suitable habitats for mature goldfish. Most goldfish are lucky to survive a year in a fishbowl, though a few may last two or three years.

This is especially shocking when you consider that goldfish can live ten years or more with proper care.

Contents
I) Why goldfish don’t live long in a bowl
II) How much space does a goldfish need?
III) How to choose the right habitat for a goldfish
IV) What if you can only afford a fishbowl?
V) Which species can live in a goldfish bowl?

Why goldfish don’t live long in a bowl

There is no scientific research on how long a goldfish can live in a bowl.

However, thanks to decades of fishbowl usage, there is plenty of anecdotal evidence from fish owners.

Goldfish in bowls have been observed to survive anywhere from a few weeks to three years, with the average being about a year.

Frequent water changes seem to help, but it is extremely rare for a goldfish to live longer than three years in a bowl, even with the best of care.

While three years may seem like a good lifespan for such a small creature, remember that a goldfish’s natural lifespan is 10-20 years.

Goldfish grow to be very large.

The goldfish sold in pet stores or given away at carnivals are quite small, usually no more than an inch long.

This leads owners to believe that a bowl is an appropriate habitat, not realizing that these fish are juveniles that will quickly quintuple in size.

Fully grown, goldfish can measure anywhere from six to fourteen inches, with most of the growth occurring in the first few years of the fish’s life.

When purchasing a habitat for any pet, always consider the animal’s mature size. A goldfish bowl is too small for even a single adult goldfish.

All aquarium fish produce ammonia as a natural byproduct of excretion and respiration, but goldfish are “dirty fish,” producing extremely large amounts.

In a small habitat such as a fishbowl, ammonia can build up rapidly, causing toxic water conditions. Most fishbowls lack any sort of filtration system to remove ammonia from the water.

Live plants and regular water changes can help slow the build-up of ammonia, but the levels will continue to increase as the goldfish grows.

A toxic build-up of ammonia can cause painful black or pink lesions known as ammonia burns, and eventually death by asphyxiation if the water parameters are not restored to normal.

How much space does a goldfish need?

Common goldfish are the species most commonly given away as carnival prizes or sold cheaply as feeder fish.

Though less eye-catching than their fancy cousins, they have bold, friendly personalities and make excellent pets.

Their long, slim bodies, straight fins, and single upright tail allow them to swim in rapid, forceful bursts. These athletic fish need a lot of exercise!

Interesting READ  Why Is My Betta Fish Standing Straight Up

They also grow to the largest adult size of any goldfish species—between eight and twelve inches.

Most aquarists recommend at least thirty gallons of water for a single common goldfish, with a tank length of at least four feet.

As their name suggests, Fancy goldfish are more ornate than their common cousins.

They are available in a wide variety of eye-catching colors and body shapes. However, they all have stubby bodies, frilly fins, and a wide, horizontal tail often divided into multiple sections.

This forces them to swim with a side-to-side wiggling motion, slower and less efficient than the movement of a common goldfish.

As a result, fancy goldfish do not require as much space as common goldfish. Twenty gallons is a suitable tank size for a single fancy, with a tank length of at least three feet.

Goldfish are social animals and benefit from having a tankmate of the same species.

Fortunately, they are considered gregarious fish, not schooling fish, which means they do not need a “school” of five or six members.

Two goldfish will be perfectly happy together, though a larger group may be more interesting to watch.

For each additional fancy goldfish, you need ten additional gallons of water.

Don’t mix common and fancy goldfish in a tank, as common goldfish swim much faster and may out-compete their fancy cousins at feeding time.

How to choose the right habitat for a goldfish

Glass aquariums are the most common choice for goldfish owners, as they allow for an unobstructed view of the tank’s inhabitants.

When choosing a glass aquarium, always opt for a tank that is long rather than tall. Goldfish enjoy darting back and forth, and a long tank gives them more room to maneuver and swim.

A longer tank also increases the surface area of the water, allowing more dissolved oxygen into the tank.

In a pinch, a large plastic storage tote can also function as a goldfish habitat.

These are less attractive than glass aquariums, but beginning aquarists may prefer them simply because they are cheap, durable, and readily available at most grocery stores.

Make sure to find a filter with suction cups that can attach to the side of the tote, and keep the tote out of the reach of young children and pets.

Goldfish were originally bred as ornamental pond fish in Imperial China, and are well-suited to life in a pond. In a properly maintained garden pond, goldfish can live twenty years or more!

Goldfish pond kits can be found at most hardware stores, and offer a roomy, naturalistic environment for your pet.

In cold climates, fancy goldfish may need to be transferred to an indoor tank for the winter.

Never release goldfish into a natural body of water, such as a river, lake, or stream. Goldfish are voracious eaters and may pose a danger to native fish.

What if you can only afford a fishbowl?

You may find yourself in a situation in which a goldfish bowl is your only option. If you can only afford a fishbowl, there are still actions you can take to make your fish’s life more comfortable.

Interesting READ  Do Fish Get Sad When Other Fish Die?

Since most fishbowls lack the filtration systems necessary to remove ammonia, you will need to perform a 50% water change every day.

This will help control the ammonia levels, preventing burns and suffocation.

You can perform a water change by scooping out water with a clean cup or using a small siphon or gravel vacuum.

To avoid injuring your fish, make sure to pour clean water into the bowl in a slow, controlled stream.

Before performing a water change, use a dechlorinator to remove chlorine and any heavy metals from your tap water.

Dechlorinator can be found at any pet store and even carried in large grocery stores’ pet supply sections.

Follow the instructions on the bottle to add the correct amount of dechlorinator to the water.

An airstone is a small device that promotes air circulation in aquariums.

Adding an airstone to a fishbowl will drastically improve the water quality by forcing oxygen into the water and forcing waste gases out.

While you may be unable to fit a full filtration system into a fishbowl, an airstone takes up very little space and can be purchased in sizes suitable for a goldfish bowl.

If a brand-new glass aquarium is out of your price range, keep an eye out for second-hand aquariums!

These can be found at yard sales, thrift stores, and online. Many locally-owned fish stores also resell used supplies for discounted prices.

When using a second-hand tank, make sure to test it for leaks before adding fish or décor.

For goldfish owners determined to get their pets into a more spacious habitat right away, a large plastic tote may be the best option.

Make sure to choose a tote without any openings in the exterior, as some totes are sold with holes pierced near the handles to help the lid attach.

Which species can live in a goldfish bowl?

Though generally unsuitable for goldfish, fishbowls can still serve as functional, sleek-looking habitats for a few smaller, more low-maintenance species.

A fishbowl with a simple river rock substrate and a few marimo balls makes for an appealing and natural desk display.

Many species of aquatic snail can thrive in a fishbowl.

With décor to climb on, algae tablets and live plants to eat, and occasional water changes, these slow-moving creatures can provide years of companionship.

Be sure to cover the fishbowl securely, as aquatic snails are notorious escape artists.

Also, remember that some species, such as mystery snails, reproduce rapidly and grow too large to live comfortably in a bowl.

Always research a snail’s species before adding it to any habitat.

Up to six white cloud minnows can live together in a three-gallon bowl.

Make sure to add live plants and other décor to provide enrichment for these curious fish, and perform a 50% water change at least once a week to control ammonia levels.

How To Introduce Neon Tetras To A Betta

How Long Can A Betta Fish Live Without Food?