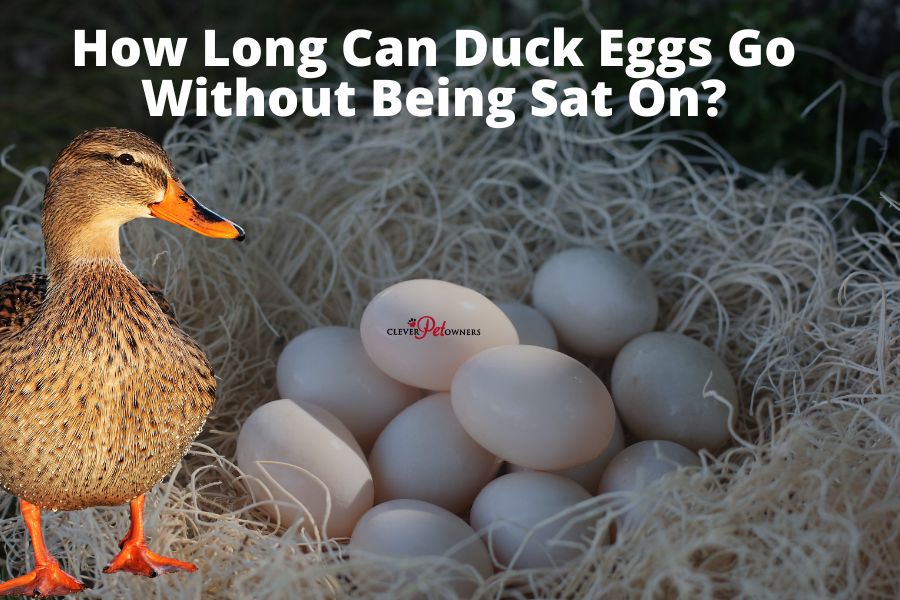 The mother duck is the most crucial part of the survival of its eggs. If something happens to a duck before the eggs hatch, the odds of those eggs’ survival diminish significantly.

On average, a mother duck can’t be away from her eggs for more than two hours once the incubation period starts, or it becomes unsafe for the eggs.

If eggs are not in the incubation period, then some can survive around two weeks without their mother.

In the case of egg abandonment, here are some things you should know to understand the dangers of a missing mother duck and what you can do if this happens.

What happens when a mother duck leaves her eggs too long?

If you see a full clutch of duck eggs in incubation and know that the mother has been missing for more than two hours, then there is a problem.

A mother duck providing warmth to her eggs during incubation is key to their survival. Without a mother duck around, eggs will eventually freeze and become unviable.

When a mother duck leaves for short periods throughout the day, she typically covers up her eggs with her feathers or other materials she may have used to build her nest.

Though this is helpful for a short period of time, this material can eventually shift off from the wind or other elements, leaving the eggs without something to keep them warm.

The time it takes for eggs to freeze depends on the environment’s temperature and the embryo’s size.

Eggs may survive longer without their mother in warmer climates; however, as temperatures drop at night, their mother’s return is extremely crucial.

Warm climates also tend to possess more predators, such as snakes, who can harm the eggs.

Other duck egg predators may include avian birds, skunks, raccoons, and coyotes.

If an embryo is pretty far along, it may last a bit longer without its mother despite the temperature.

But, if the mother isn’t coming back at all, then those eggs lack their only defense against predators, which is always a concern no matter the temperature.

How long is too long?

Something important to remember is that once a mother duck sits on an egg, that marks the start of the incubation period. That is also when the development of an embryo starts.

During the incubation period, leaving eggs for more than two hours is dangerous because as the egg matures, life starts to form; an egg turning cold may mean death for the unhatched duckling.

You may have read in other places of an egg surviving for up to 2 weeks without the mother duck. That’s because the egg has not entered the incubation stage yet.

Even so, be aware that the longer the egg spends away from its mother (or an incubator), the lower its hatchability rate will be.

Gone for more than the average leave time

Mother ducks typically spend 20 to 23 hours sitting on their eggs daily. When they are away from their nest during that 2-3 hours, they are probably finding food or preening.

Interesting READ  How To Tell If A Duckling Is Blind?

Any time spent longer than that may indicate abandonment if this happens during the incubation period.

Though embryo age and temperature may allow them to survive longer, an abandoned nest may not make it through the cold night.

Why may a mother duck abandon her nest?

It isn’t uncommon for a mother duck to abandon her eggs. Understanding some of the reasons that mother ducks abandon their nests can help to prevent it from happening or tell you about the state of the nest.

If you find an abandoned nest of duck eggs, chances are the mother left them because she has realized they aren’t viable or fertilized.

Mother ducks may assume eggs will hatch until too much time has passed after the incubation period and they haven’t hatched.

At this point, a mother will become unhappy and abandon the nest as they are not going to hatch anyway.

Another reason a mother duck may abandon her nest is that there is too much commotion around her.

The commotion may bring undue stress to the mother, causing her to abandon her nest out of fear.

If you are around a mother duck and her nest, keep calm and quiet so you don’t scare her away and leave her eggs without protection and warmth.

It’s also important to keep unfamiliar people away from a mother duck and her nest as they may also spook the duck leading to egg abandonment.

Not every duck has great nesting abilities, which may result in an abandoned nest. Like any animal, the process of offspring production doesn’t always come naturally.

A mother duck may try for a few days before giving up and abandoning her nest.

Sadly, a duck may not return to its nest if it has been injured or killed. This may be because of human interference, such as an automobile, or because of a predator.

Predators of ducks include animals such as foxes, coyotes, and owls, as well as a host of other creatures.

What to do if mother duck won’t return to her nest?

If you are sure a duck won’t return to its nest during the incubation period, you can do a few things to try and save the eggs if that is something you’re interested in.

Whether pet ducks or a wild nest that you’ve been watching, you may consider doing these things to save these eggs.

Check that the embryos are alive.

The first thing you should do if you have found an abandoned nest is to check if the embryos in the eggs are still alive.

You can easily check by ensuring the eggs aren’t broken or by checking that they’re warm.

Something else you can do is candling the egg. This is done by holding a small flashlight to illuminate the egg and checking for veins and a reddish coloring.

Interesting READ  Why Do Ducks Flap Their Wings?

It is possible for a hen to hatch a duck egg. First, you must ensure the hen is broody, meaning it is in a state with the urge to incubate eggs.

This should only be done if you have limited options because of issues that may occur.

One pressing issue is that the typical period of a hen brooding is shorter than the incubation period of a duck egg.

This means that a chicken may be done brooding before the duck egg has hatched.

To combat this issue, you can try to put duck eggs under a hen a few days before they are slated to hatch to ensure they are sat on for enough time.

The best option you can do for abandoned duck eggs is to use an incubator. If you don’t have one on hand, you can find cheap ones online.

Whether you put duck eggs in the incubator full-time or part-time before moving them under a hen, an incubator is a must for trying to hatch duck eggs.

If you don’t have an incubator, this may drive you to look for tutorials to make a homemade one.

You should steer clear of doing this and simply look to buy an actual one online.

Not only may you waste your time building something that either doesn’t work or doesn’t work well, but it can also pose a fire hazard which obviously isn’t good for you or the eggs.

Whether the duck egg is from a pet or one you stumbled upon, if you aren’t sure what to do with a presumably abandoned nest, you should contact your local animal rescue agency.

Those working there are probably more equipped to handle such a situation and may be able to best advise you about what you or they can do.

There’s always a chance that a duck can abandon her nest, and it’s important to know what to do in such a situation. A crucial thing to remember is that you shouldn’t interfere with a nest unless you are sure it is abandoned.

The mother duck may just be away looking for food, preening, or the eggs aren’t in their incubation period, and the nest may not actually be abandoned.

If you move a nest, even if only a bit, a mother duck may not recognize it as hers causing her to actually abandon the nest, and you are doing more harm than good.

If you are sure that the nest is abandoned and in the wild, chances are the eggs are already non-viable, so it may be best to just leave them.

If you want to be sure there isn’t hope, you can always check that the eggs are still alive before making your next decision.

It’s always good to give a mother duck the benefit of the doubt because chances are, she knows what she is doing more than you.

But if you are sure that the nest is abandoned and it hasn’t been that long, there is still a chance that you can save the eggs!

Why Do Ducks Flap Their Wings?

Why Is My Duck Panting? What Should I Do?

How To Tell If A Duckling Is Blind?