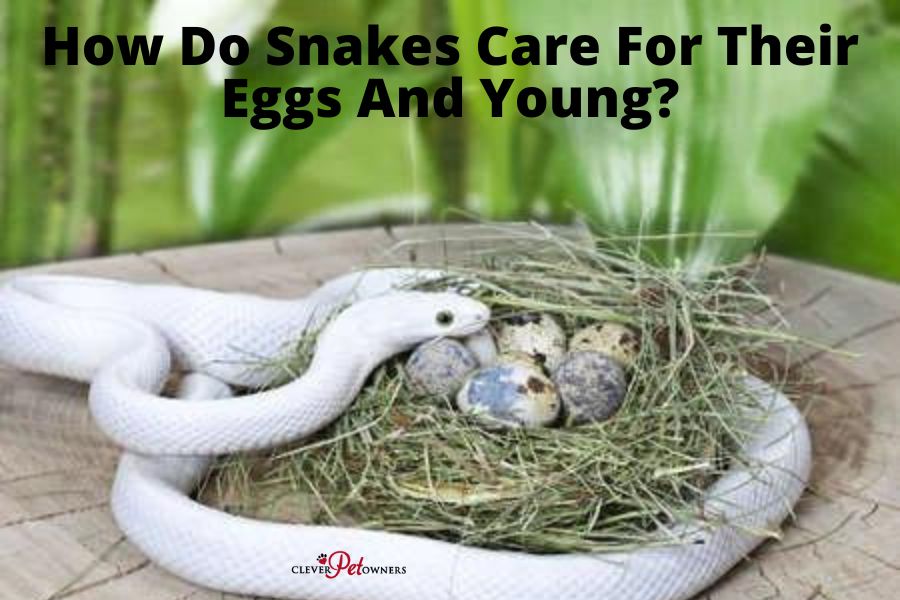 Snakes are known to be solitary creatures. So, you may have wondered how parenthood looks for them. Do they lay eggs like many other reptiles? Do the mother and father raise their offspring? The answers may be more surprising than you think.

Some snakes will stick around to protect their eggs as an instinct. However, most of them will not stay to protect their young because baby snakes are born ready and able to care for themselves.

Read on to learn more about snake habits when bringing the next generation into the world.

How do snakes take care of their eggs?

Snakes may take care of their eggs by laying them in a safe nest.

Most snake species do not build their own nest when laying eggs. And unlike many reptile species, snakes don’t usually bury their eggs.

The only exception is King Cobras, who have been witnessed creating their own nests in captivity and in the wild.

Most other snake species will, instead, look for an existing structure to hide their eggs. This includes such places as under or in fallen logs, mounds and tunnels created by other animals, leaf litter and brush, etc.

The main criteria are that it must be hidden, protected from the elements, and humid. Snake eggs, unlike bird eggs, are soft. So, they must remain moist to keep them from drying out.

Although only a tiny portion (about 3%) of the snake population, some egg-laying snakes actually stay to guard the nest.

Many of these are different kinds of pythons and King Cobras. Female and male King Cobras have been witnessed protecting their eggs from predators.

Almost all other species of snake will leave after laying eggs. In fact, the males leave as soon as the mating is done; they play no role in the offspring’s lives after that. And most females don’t stick around to protect the eggs, leaving their fate up to nature.

If you haven’t heard of it yet, some snakes actually give birth to their young directly (viviparous). Water snakes and boas are two examples of viviparous snakes.

These are just a small population, while oviparous, egg-laying animals account for about 70% of all snake species.

Then some species are somewhere in between, or ovoviviparous. These snakes carry their eggs internally until they hatch and then give birth to live offspring. Sea snakes, garter snakes, and most pit vipers are ovoviviparous.

The advantage of giving birth over laying eggs is that the female snakes can keep their babies safe until they are ready to be born. In this way, she doesn’t put herself in danger by having to stop to lay eggs.

Do snakes eat their own eggs?

Eggs are a natural part of many snakes’ diets. These are usually eggs of other reptiles or birds.

Kingsnakes, however, are known to eat the eggs of other snake species. And although it is uncommon for snakes to eat their own eggs, it does happen, especially in captivity.

There are a few reasons a snake might eat its own eggs. One could be that an egg is not viable. The snake may consume it to prevent it from rotting and affecting the other eggs in the nest.

This would be more common in snakes that stay to guard their eggs. During this period, these snakes forgo eating and hunting, so their instinct wouldn’t be to eat their own eggs.

Another reason could simply be hunger. Wild snakes that leave their eggs immediately wouldn’t be likely to eat their own eggs from hunger. This is more common in captivity.

The snake can’t abandon its eggs inside the enclosed space. Leaving the eggs in the enclosure increases the likelihood of the snake mistaking its own eggs for food. It’s believed that after some time, the snake forgets the eggs are its own.

Do snakes take care of their young?

While some species stick around until their eggs hatch, most don’t. Even the King Cobra leaves once its eggs have hatched.

Most snake eggs take almost two months to hatch, and protecting the eggs is taxing on the female snake.

The mothers who stay don’t eat during that period. This means they need to begin hunting again as soon as possible before they become too weak.

Female snakes don’t produce any milk, even those that give live birth, and don’t regurgitate food for their babies like a bird. They actually don’t feed their offspring at all; instead, that task is left to the babies themselves.

Newborn snakes, or snakelets, are born fully developed. Leaving them to fend for themselves is a way to help ensure only the strongest survive to pass on their genetics.

There are a couple of exceptions to this, though. Some pythons and vipers do stay to protect their newborns. But this is only for a very short period. They usually leave after the snakelets first shed, which happens at about seven days old.

Do snakes eat their own babies?

Yes, some snakes may eat their own offspring. There are a few reasons this may occur.

One is simply hunger. There are species of snakes that eat other snakes as part of their usual diet. Snakes need to eat to survive; without another food source, the mother may eat her babies for the nutrients.

If there is a lack of resources, often due to overpopulation, she may eat them to rid herself of the competition.

Stress can also cause them to eat their young. If the snake feels they’re all in danger, she may eat her babies to prevent a predator from benefiting from the nutrition. These behaviors are most commonly seen in vipers and pit vipers.

How do baby snakes survive without their mother?

Snakes are precocial or born already fully developed and independent. They have all the senses and instincts of an adult.

They only need to learn how to use them. Their bodies store some nutrients before they are born that they live off of for the first few days. But after their first shed, they must begin to hunt for themselves.

Because snakes don’t stick around to raise their young, snakelets are not taught how to hunt. Instead, they are born with the instinct and the ability to provide for themselves.

The babies are carnivores, the same as the adults. Their prey is just much smaller. Snakelets hunt critters such as bugs, small amphibians, and baby mice. Water snakes will eat small fish and critters in the water.

If a newborn snake cannot hunt its own food, it won’t survive. Adult snakes can go a decent period between meals, but newborns need to eat about twice a week to thrive and grow.

Survival of the fittest

Not all snakes in the wild will survive into adulthood. Their greatest threat is being eaten by predators. Even their prey, if it fights back, can seriously injure or kill a baby snake.

They are too small to defend themselves well yet, although venomous breeds of snakes are venomous from birth. Snakelets are also more vulnerable to the elements because of their smaller size.

The percentage of snakes in the wild that survive into adulthood isn’t easy to calculate. Because they hide their eggs, it is difficult to know the numbers precisely. But some species are estimated to be as low as 20%.

Clutch sizes can vary greatly. Smaller snakes may only lay 10 eggs. Larger species can lay 100 or more. The more offspring a snake produces at one time greatly increases the odds of a higher survival rate.

There is no one way that snakes care for their eggs and young. 70% of snake species lay eggs, while the rest give live birth.

They rarely build their own nests, and many snakes abandon their eggs and young immediately. But there are a few species where the mother stays to protect her clutch and her newborns.

This is more common in different pythons and vipers. The mother sometimes eats the eggs and young, but usually for very specific reasons.

Eggs are most at risk in captivity if not removed from the mother’s enclosure and incubated on their own. However, they are at a greater risk of being eaten by predators.

But just because the parents don’t stay to protect and teach their offspring doesn’t mean the snakelets are helpless. Being born precocial means, they are completely able to provide for themselves.

They already possess the instincts and the senses of an adult snake. They just need to learn to use them to thrive in life. If they cannot do so, they will not live to grow and pass on their genetics to their offspring.

Can Snakes Hear And See Well?