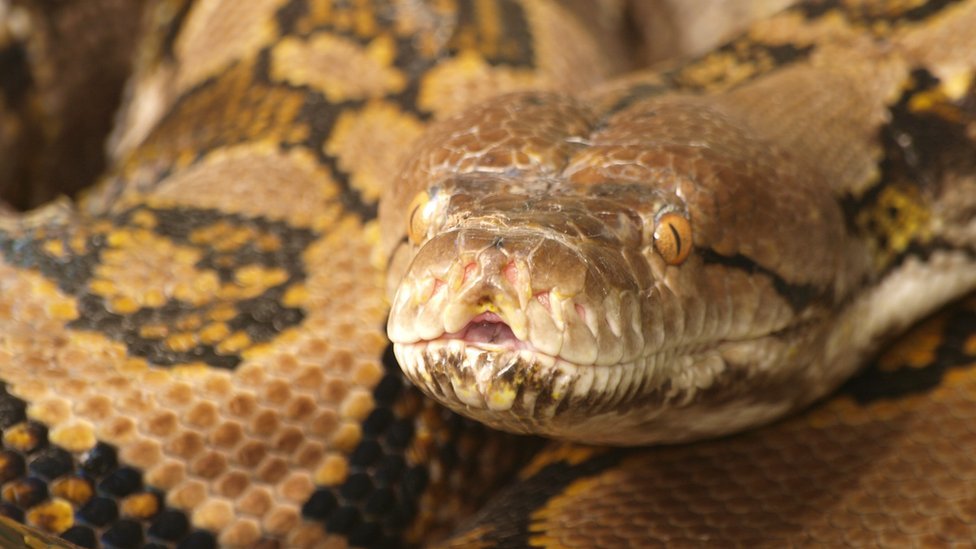 Snakes are excellent predators, but even predators get scared and are hunted but other things. So how do pythons defend themselves?

There are many types of pythons in several different environments, and while they vary a lot in temperament, color, and size, most pythons defend themselves by camouflage and striking to scare bigger predators away.

GIF
Contents
I) Ways Pythons Protect Themselves
II) What Can Possibly Threaten a Snake?
III) How To Handle Defensive Pythons
IV) Conclusion

Despite snakes being feared by many, they are not creatures that will hunt you down if they are angry. Snakes are far more defensive than aggressive and when they feel threatened they do what they can to make you go away.

So, the ways they protect themselves are often called “defense mechanisms”. These defense mechanisms vary based on species, and since pythons are some of the most popular pet snakes in the world, we’re going to look at a few different types of popular pythons and how they defend themselves.

Ball pythons are one of, if not the most popular pet snake in the world. They are native to the tropical grasslands and savannas of Central and West Africa and much prefer camouflage to avoid predators.

But their most well known defense mechanism is “balling up”, which is where they get their name.

Oftentimes when people are attacked or have things thrown at them, our first instinct is to protect our head. We duck down, lift our arms up and shield our faces because we’re scared!

We don’t want to get hurt. Ball pythons are very similar. When they feel threatened or scared, they will curl up around themselves and tuck their heads away.

They don’t want to be hurt either and all they see is that you are bigger than they are!

If they are feeling particularly scared or threatened, or balling up hasn’t worked, they may get into a striking position. This means that their neck becomes like a zig zag, a back and forth shape, because they are ready to reach out and strike.

It provides them good leverage as they hold onto a branch or balance on the ground. If your ball python strikes at you, that doesn’t mean it thinks you’re food. A strike is a quick bite, release, and retreat. 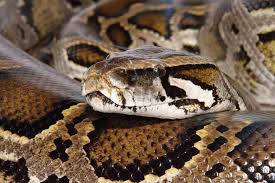 Burmese pythons inhabit the jungles and marshes of Southeast Asia and are one of the largest pet snakes, reaching between 10 and 20 feet in length as an adult! These are very strong snakes, but can also make excellent pets!

You have to be more careful with these, however, as it’s always better to have a second person helping you handle them because of their massive size. Many people have bought one without knowing how to care for one, finding themselves in over their heads, and released them.

Unfortunately this has given them a bad reputation as they have breed in the wild and are now an invasive species particularly in Florida. But, if you do your research and handle them frequently as babies and as they age, they are very docile.

Interesting READ  Do Snakes Live in Groups or Alone?

Even with their size, they still get scared sometimes. But these guys aren’t seen balling up like a ball python, instead they are ready to strike if they feel sufficiently threatened.

But again, striking is never a snake’s first line of defense. Striking at a person or animal puts them in a risky position! It means they are putting themselves in a predator’s space when their goal is to get the predator to go away.

Before a Burmese python strikes in defense, it will warn whatever is approaching by hissing loudly.

Green tree pythons can be found in Australia and New Guinea and are an arboreal species. This means that they spend most of their time in trees instead of hiding on the ground.

They coil and drape themselves across a tree branch, their beautiful green colors an excellent camouflage for the patches of rainforests they inhabit. This camouflage is their first line of defense. They also have very thin tails that are colored slightly differently than the rest of their bodies.

While hunting, they may wiggle their tail to imitate a worm and lure prey in, but occasionally you will see this as defensive technique.

These snakes do have a reputation for being very snippy, and that is because they like to jump to striking as a line of defense rather quickly. They’ll hold on to their perch with their lower body and curl up their necks into that same zig zag, back and forth shape, quickly strike, release, then retreat. 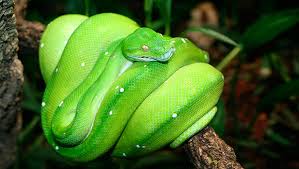 What Can Possibly Threaten a Snake?

There aren’t many things in the world that aren’t hunted by a bigger animal. Snakes are no exception! When it comes to humans, we are big and tall and have hands that grab and that can be very scary for something that slithers on the ground.

They have developed to be very cautious predators, and that is because, in their natural habitats, other bigger animals will hunt them down.

When any snake is young, whether it be a ball python, Burmese python, green tree python, or something completely different, they are very small. While they may be able to evade larger predators, they are extremely vulnerable to things like birds or even other reptiles. \As adults, each species has their own creatures to worry about. Ball pythons have to be wary of warthogs, crocodiles, sometimes leopards, and humans.

Burmese pythons are mostly vulnerable when young due to their large adult size, but are still known to be killed by large birds of prey, tigers, or other large cats. Green tree pythons have to be extra careful with birds since they spend most of their time in the trees.

But another predator that preys upon them are mangrove monitors, large lizards that are very powerful.

Interesting READ  Can a snake survive with a broken back?

Wild pythons have lots to worry about, and captive ones that are our pets don’t necessarily understand that.

How To Handle Defensive Pythons

If you have one of these species of snakes, and they are defensive, you may be wondering how best to handle them and tame them down. As with any snake species, frequent handling is important.

But so is your safety! Bites are not deadly, and with the ball python and green tree python, are not very painful, but there are things you can do to protect yourself.

You can wear thick gloves in case they strike at your hands and use a snake hook to remove them from their enclosure before handling them. If you don’t have these items, here are some things you can do.

Confidence is important! If you spend a lot of time sticking your hand in their enclosure, in their face, then pulling away, over and over again, that’s going to frighten and worry them more and encourage them to strike. For ball pythons and young Burmese pythons, you can show them your off hand, but do not pull away then back repeatedly, and use your main hand to scoop them up from behind. Once in your hands, don’t force them to move. 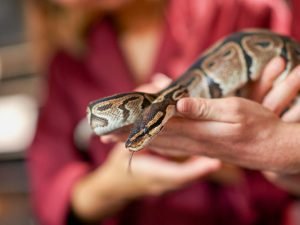 Let them get comfortable, support them as needed but avoid putting your hands near their face.

With green tree pythons, you can avoid much of their defensiveness by changing how their enclosure is set up. Because they are arboreal, they require several raised resting places that resemble branches in size and shape.

What many snake-owners do is use removable resting places, such as pvc pipes that can be detached from the enclosure walls, so that you can take the snake on its perch completely out of the enclosure. Once out, you can touch the snake from below, rub your fingers on it’s back to try and encourage it to move, or gently rotate and wiggle the perch until you can slide the snake off of it’s perch.

Once in your hands, let it settle and get comfortable just like with the other snake species.

Snakes, especially pythons, can make excellent pets. But just like any creature on earth, including humans, they have several defense mechanisms that they use when scared or threatened. If you watch out for these signs, you can better protect yourself and better know how to approach your pet. With any defensive snake, the key to getting it used to handling is to handle it often! If every time you try to handle them you back down as soon as they show any defensive mechanisms, then you’ll never be able to handle your pet. For larger species like burmese pythons, this can be very dangerous as they are very strong and their bites are worse than that of the smaller ball python or green tree python. Whatever snake you decide is the right pet for you, make sure you do your research and learn about how to best care for and handle them.