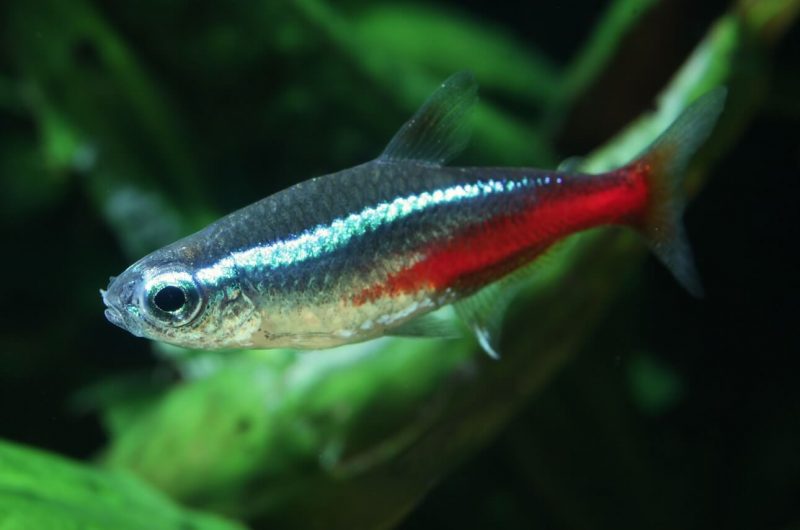 Neon tetras are one of the most commonly kept aquarium fish, and for good reason! They’re beautiful, hardy, and affordable. But for certain aquarists, they also have one more benefit: they’re avid breeders.

Neon tetras mate by performing a “courtship dance” and then spawning, producing dozens and even hundreds of eggs. This process can be triggered purposely or accidentally depending on the tank parameters.

The neon tetra mating process is easy to understand and replicate in the home aquarium. With the right setup and a bit of practice, you’ll have eggs in no time!

Females neon tetras can be sexed by their fatter bellies and longer bodies, while males will be smaller and brighter. If a female and male are particularly compatible, it’s likely that they’ll pair up and swim around the tank together.

During the mating process, the male neon tetra will “court” his chosen female by swimming around her in a vaguely square pattern. His movements will be short and jerky, usually broken up by pauses.

If the female is impressed by this dance, they’ll begin swimming side by side. This signals the start of the spawning process.

Tetras have an incredibly short gestation period and can spawn daily.

Unfortunately, neon tetras aren’t great parents. In fact, they’ll eat their own eggs if left in the same tan.

The majority of the work falls to the aquarist to hatch and raise the fry to adulthood.

If you want to breed your neon tetras in captivity, place male-female pairs in a breeding tank and mimic their natural habitat. We’ll discuss the tank parameters you’ll need to match below.

Contrary to usual advice, they should be allowed to eat however much they want until their stomachs are fat and rounded.

Perform weekly water changes of at least 25% but no more than 50%. Anything less will result in dirty water that tetras are unlikely to mate in.

Anything more may destroy your bacteria colony.

Just like in the wild, neon tetras that breed in captivity will produce hundreds of eggs. But don’t panic about space just yet— a large chunk of these eggs won’t survive.

Many will be eaten by adults, fail to develop properly, or die shortly after hatching. 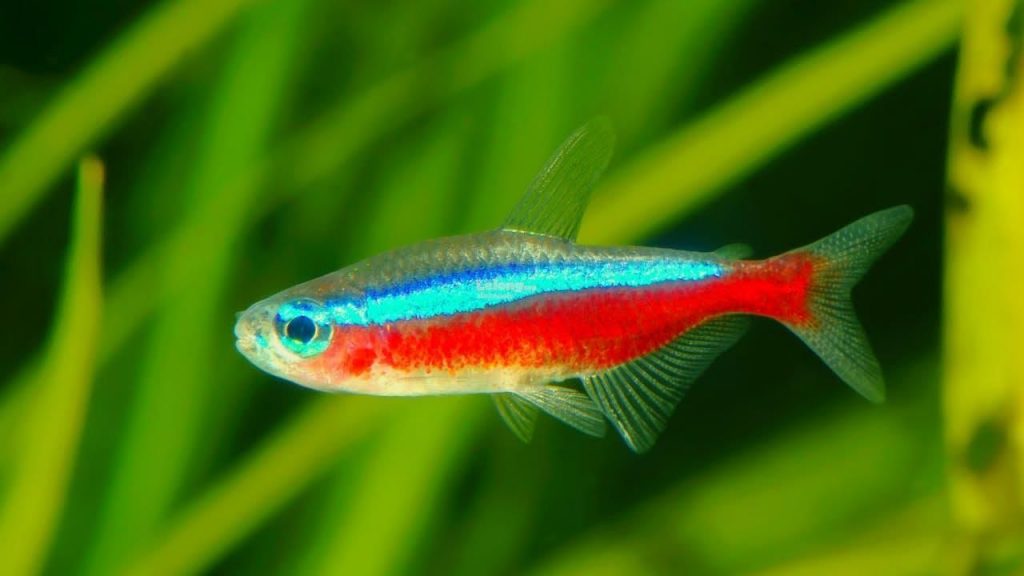 If you’re ready to take on the challenge of mating neon tetras, that’s great! But before you start, you’ll need to prepare:

And, of course, you’ll need to research! (Since you’re reading this, you’re already off to a great start.) Research the neon tetra mating process so that you’re familiar and comfortable with the steps.

Breeding fish isn’t something you should do on a whim; it takes careful preparation and practice. Anything less can harm the fish and cause problems in the future, such as overcrowding.

Neon tetras are tropical fish that originally came from the Amazon. Because of this, they like water that’s soft, acidic, and dark.

If you want to mate your tetras, mimicking these conditions is your best bet. 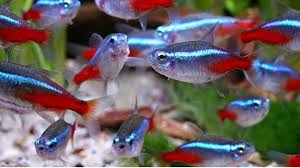 Set up and cycle your breeding tank. Make sure your bacteria colony is established and strong before introducing fish.

These are the parameters to aim for:

You can either use a very weak light or no light at all in your tank. Light hinders the growth of eggs and fry, so it’s entirely optional.

Too much light will kill the eggs before they even have a chance to hatch.

To darken the water and come as close as possible to the tetras’ natural habitat, you’ll need to add tannins. Tannins are an organic substance found in driftwood, leaf litter, shells, pods, and other natural materials.

When you put materials like this into your aquarium, the tannins will gradually leach out.

This can be prevented by pre-boiling or soaking the materials. However, that greatly reduces their benefits.

Tannins naturally stain the water yellow and brown, thus darkening it. They also lower the pH and soften the water.

All of this works in your favor, though it’s not the most appealing sight to look at.

One of the most common problems is creating a tank with enough cover that neon tetras feel comfortable in it. At the same time, it can’t be too crowded.

This is a difficult balance to strike. Generally, it’s a good idea to add driftwood and plants (either live or fake).

When in doubt, reference pictures of neon tetras’ natural habitat.

Another common problem is getting the spawning mops right. These are essentially what they sound like— structures that look like mop heads which tetras use for spawning.

These can be made from synthetic materials or live plants. Java moss is a common plant used for this.

Interesting READ  How Long Does It Take For Betta Fins To Grow Back?

In rare cases, it’s also possible for owners to accidentally or unknowingly breed neon tetra. If you look in your tank one day and see clear eggs scattered everywhere, this is what’s happened.

Most often the eggs will quickly die, eaten by other fish or killed by your lights.

Like with most fish, it may take a few tries before you and your tetras get the mating process down pat. It’s not unusual for both beginner and experienced aquarists to have unsuccessful breeding attempts.

Don’t be discouraged if this happens. Instead, check your tank parameters and observe your fish.

See if there’s anything different you need to try for the next try.

If you have a successful mating, there will be several signs:

Healthy, fertilized eggs should be clear with a black dot in the middle. Pink or white eggs are no longer viable.

Within the industry, fish keepers disagree about whether it’s harder to mate neon tetras or raise the fry. Tetras can be finicky and difficult to pair off.

But eggs can also be delicate and fry just as temperamental as their parents.

Once you’ve had your first successful mating, your changes of having more greatly increase.

How To Care For Neon Tetra Fry

If you notice that fry are developing at different rates or that new babies seem to be popping up, don’t worry! This is normal.

Eggs usually hatch within 36 hours, but some may do so earlier or later.

It will take roughly a week (five days) for the fry to be free swimming. They won’t be ready to join other adult tetras until they’re 12 weeks old, at which point they’re ready to breed.

When you buy a neon tetra from the store, this is usually how old they are.

You can either keep your new, adult neon tetras or contact a local pet store to see if they’ll take them. But if you sell to a pet store, make sure to transition your fry to a more commercial setup.

That is, they’ll need to get used to clear water instead of an environment with tannins.

If the proper tank conditions are in place, neon tetras can be successfully mated. Though not always easy, tetras are one of the more commercially- and domestically-bred freshwater fish species in the hobby.

It’s incredibly rewarding to breed neon tetras. Despite the trouble some aquarists can have when attempting this, it’s entirely worth it to see a fry hatch for the first time.

Why are water changes not lowering nitrates in my fish tank?