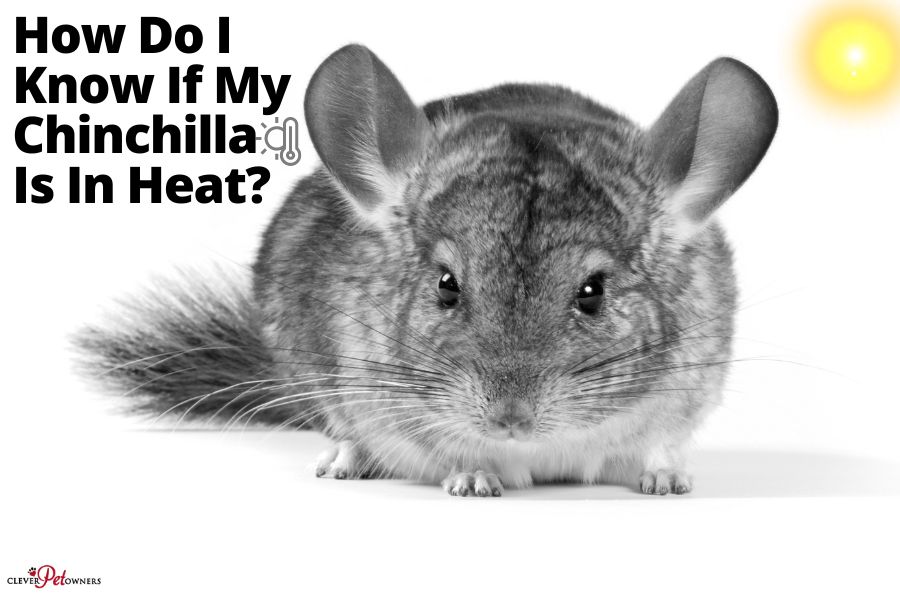 Your chinchilla’s heat cycle isn’t very critical if she’s alone. She may not ever show any symptoms, or you may not even really know their gender.

Recognizing the signs of a chinchilla in heat becomes very important when deciding to get your pet a friend.

Even if someone else has previously gendered your chinchillas, or if you’re confident that you have 2 boys or 2 girls— mistakes happen more often than you think.

This article will help you know a little more about your pet’s heat cycle and avoid potential accidents.

Signs your chinchilla may be in heat

We’re used to having the ease of spaying our dogs and cats, or if not, knowing when they’re in heat by how they vocalize and interact with others.

It is, unfortunately, a little more complicated with chinchillas, but the signs can be there!

Keep in mind that chinchillas do not always show symptoms of being in heat. But if your pet does, these will be the signs.

Male chinchillas do not go into heat, but both males and females sexually mature at eight months. It’s still possible for your female to become pregnant as young as three months old.

For the health of your chinchilla, it is recommended to wait until they become one year old to allow breeding.

On the rare chance that they get pregnant and are younger than one year, it can be very harmful or even lethal for your chinchilla and her babies.

Consider that it is not healthy or encouraged to purposely let your chinchilla get pregnant. If you begin to breed chinchillas without having proper knowledge, this becomes “backyard breeding” and is discouraged.

Knowing the maturity of your chinchilla relies on knowing its age, which may be difficult if you’ve adopted them from someone else.

A healthy chinchilla under eight months will be smaller but chubbier, energetic, and vocalized frequently.

A chinchilla eight months and older will be larger, have lost most of its rounded appearance (will become longer), and be less vocal.

All chinchillas play with each other. It isn’t uncommon for a dominant chinchilla to chase and mount a ‘submissive’ chinchilla.

Mounting between 2 males or females will be very quick as the submissive will not want to cooperate, and the dominant is not actually attempting to mate.

Seeing this type of behavior alone does not necessarily mean that you have different sexes, but you should be wary of unnecessary aggression.

However, if you’re absolutely sure you have two caged females, seeing them mount each other could signify that one is in heat.

A male and a receptive female that are in heat will chase, vocalize, and groom each other heavily.

Domesticated chinchillas are more likely to be monogamous, meaning that they have one partner, and grooming is not uncommon. However, chasing and grooming, specifically the neck, is a good sign of heat.

A male mating will take longer, and he will continuously do it until he is sure that he has mated with the female.

After the male has successfully mated, he will develop hiccups. Hiccups can happen when any chinchilla gets excited but happens commonly after a male has mated for the same reason.

A female alone in the cage does not show many signs of being in heat as she is not around other chinchillas to trigger her hormones.

If your female chinchilla is more active in the day when she should be or is usually sleeping, this can indicate the starting her heat cycle or already in it.

Interesting READ  How to Tell A Chinchilla’s Age?

She may also be more aggressive or finicky if she usually isn’t. This could be a sign specifically of the proestrus phase, where her hormones are beginning to show but haven’t quite yet.

Female chinchillas do not menstruate like dogs or cats. Instead, they will produce waxy substances called plugs. Please contact your veterinarian if you see any blood or discharge from your male or female chinchilla.

Remember that these plugs do have nutrition, and your chinchilla will eat them, so you will not always find them. It isn’t uncommon for both males and females to not drop these heat plugs at all.

You likely will never discover these waxy plugs fresh. By the time you discover them, they will be dried and might look a bit like the rawhide of a dog chew toy or look and feel like brittle plastic or crunchy wafer paper.

These plugs are usually dropped while your chinchilla is relaxing or sleeping, so if you suspect that your pet is in heat or has mated, check their regular hides or places where they like to sit to see if you find a plug.

What does being “in heat” mean for a chinchilla?

When we hear the words “in heat”, we all know what it means. But there’s a lot more to it!

Chinchillas are not afraid of letting others know they’re not in the mood! For example, a female will not accept a male’s advances if she is not in estrus. She will likely be aggressive and spray urine.

When does your chinchilla go into heat?

When chinchillas reach six months, they will have estrus cycles of 28 to 50 days and in cycles of 2 to 4 days because they are spontaneous ovulators.

Even though the process can be 50 days long, your chinchilla will only show signs and be receptive in those 2 to 4-day intervals.

Chinchillas are also polyestrous, meaning they have more than one breeding period per year.

Why does your chinchilla go into heat?

Estrus originates from the Latin word ‘oestrus’, which means frenzy. This comes from how crazy and always changing the heat cycle is!

Your chinchilla’s heat cycle can be irregular and start as young as three months old, but she will automatically begin her heat cycle at six months old.

Her heat cycle will start at six months old, though she still won’t be considered mature until she is eight months old to 1 year old.

Spaying your chinchilla by removing her reproductive organs would, of course, stop this natural process.

Your chinchilla goes through a lot of different changes during her heat cycle.

Each phase has different purposes and produces different chemicals to further the cycle.

During the proestrus phase, little circular cells form on the ovaries called follicles. These follicles will begin to secrete the hormones that make the chinchilla start her heat cycle.

One of the hormones secreted by the chinchilla’s body is called gonadotropins. These special hormones help encourage the circular follicles to grow on the ovaries to produce their own hormones.

At this time, the chinchilla will not yet allow males to attempt to breed with her.

The estrus or oestrus phase is when the follicles on the ovaries have matured and are ready to release the familiar hormone estrogen.

The estrogen from the follicles is what will send signals to the chinchilla’s brain and let her know that it’s time to mate. She will now become receptive to males during this phase.

Metestrus or diestrus is the phase where estrogen will stop being produced, and a new part in the ovaries called the corpus lutem begins to show.

The corpus lutem produces the hormone progesterone, which will prepare the chinchilla’s body if she does become pregnant.

If mating isn’t successful or if she doesn’t mate at all, the corpus lutem stops producing progesterone and returns to the ovary.

If the chinchilla does not become pregnant, she will instead go into the phase called anestrus, where her hormones and heat will come to a rest.

She will no longer display the typical signs and symptoms of heat or estrus and will once again reject a male’s advances to mate with her.

The cycle will repeat at proestrus until she becomes pregnant.

Should you neuter your chinchilla?

Chinchillas can be caged perfectly fine alone if you interact with them and provide sufficient play time outside their cage.

In the wild, they are social animals like all rodents, so they can also be caged with other chinchillas. They will naturally establish a pecking order and will either bond with one another, or they may even ignore each other.

A common accident may include assuming that just because a male or a female are related that they won’t mate. It’s unfortunately not true.

As long as intact females and males are in one cage, they will mate!

The risks outweigh the benefits

Neutering your male chinchilla is a reasonable option, and it’s less invasive to the body than a spay. When your female chinchilla is spayed, the veterinarian has to make a larger incision in a more sensitive area.

Both sexes are exposed to potent anesthetics that are very harsh on their little bodies.

It is discouraged to neuter your chinchillas. The only event a chinchilla should be neutered is when it will improve its quality of life.

If you see signs and behaviors that indicate your chinchilla is in heat, it is best to separate your pets.

Make yourself certain that you are only caging the same sexes together. If you have to separate a male and a female, consider getting them another same-sexed friend.

Being able to recognize when your chinchilla is in heat can potentially be very difficult! Sometimes your chinchilla will show all of the typical signs of being in heat, or she may not show any.

Knowing the signs of chinchilla heat is important if you are housing multiple chinchillas. It can also be helpful to know the signs to ensure the sex of an adopted chinchilla, or to keep up with your pet’s health.

We know it’s easy to panic if you see your pet doing something different from how they normally act.

If your chinchilla is acting crankier than usual for no apparent reason, she is likely in estrus. But if you’re ever concerned, please contact your veterinarian.

How to Tell A Chinchilla’s Age?