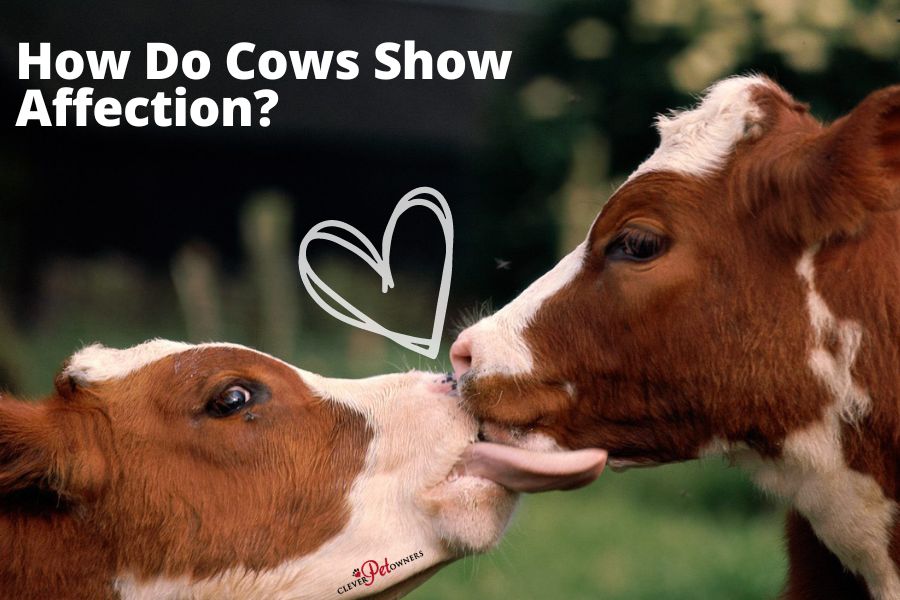 Most of us know how our dogs and cats show affection. A dog might snuggle up to us; a cat might rub against our leg and purr. But what if you own a cow for a pet? How do you know when a cow is showing love?

Cows show affection primarily in the same ways as many other animals. They nuzzle, groom, and follow their loved ones to show they care.

In this article, we will take an in-depth look at the emotional lives of cows. We will talk about how they show love to one another, their bonds with people, and how owners can instill these sorts of bonds with their cattle.

How do cows show love to each other?

Cows are fascinating animals who are far more complex than we may give them credit. They show love in a variety of ways.

The Humane League explains that cows have intricate emotions and form strong bonds with one another.

They are not unlike humans in their social interactions and thrive best when they are allowed to spend time with other cows who are like-minded. You might find them cuddling, licking, or going on walks with one another.

According to Daily Mail, a study conducted by Chilean and US researchers found that cows primarily bond with each other through grooming.

They will lick around the head, neck, and back. Research supports that cows who bond in this way have lower stress levels.

In the study, scientists spent thirty days with a herd of dairy cows who had just given birth. They primarily observed allogrooming, or social grooming.

Many creatures, such as primates and birds, have been known to groom one another to keep clean and form connections. It seems that cattle, in general, are among them.

One of the other major ways cows bond is simply by grazing next to each other.

Cows will have many friends within a herd, but it is not uncommon for them to pick a best friend who will be the cow they typically feed alongside.

In a study conducted in the United Kingdom, researchers found that over half of the cows put out to pasture together spent time eating and resting with a preferred partner.

Cows are known to form friendships that last a lifetime, so long as the cows are allowed to stay together.

Since cows are herd animals, they crave contact with one another. Another way they create this contact is by lying side by side to rest or sleep.

Studies have shown that, like humans, cows have a spectrum of personalities. They will seek out other cows with similar energies within the herd, although they all rely on one another to some degree.

Walking together is another way cows will bond and show affection.

Researchers have even conducted studies to prove that cows pick out a favorite friend from their herd.

In one study, scientists showed cows realistic photographs of different members of their herd. When shown a picture of their best friend in the group, the cows would run toward the photo.

Interesting READ  What To Do If My Cow Is Not Eating? (Causes, Complications, and Remedy)

How do cows show affection to their humans?

While cows are herd animals that love to be with their friends, what do they feel for humans? Are cows known for bonding with their owners as well?

Cows will bond with people similar to how they bond with one another. One easy way to bond with your cow is to pet it and scratch it behind the ears or under the chin.

If a cow wants to bond with you in return, they will lick, nuzzle, or follow you around just like they do to relate to their bovine friends.

A cow will often bond with a person by licking them. If your cow is licking you, this is a good sign.

Cows have rough tongues that feel similar to sandpaper. It might feel terribly scratchy to you, but if they are licking you, that means they are attempting to groom you. This means they are showing you affection!

Sometimes a cow will show it loves a human by nuzzling them just like a cat or dog might with their owner.

Some cows have been known to even lay down next to their owners and let them scratch their bellies.

Just keep safety in mind at all times. A cow who is spooked may suddenly throw their head or get up quickly. You do not want to be on the receiving end of a cow’s distress.

Always speak calmly and be sure anything that might frighten your cow is nowhere nearby before you get too close.

Be sure other animals or humans the cow may not trust are kept away when attempting to bond with your cow in this way.

If a cow is following you around, it could be curious. It could also feel bonded to you and want to shadow you like any other pet.

Since cows tend to follow their friends in the herd, it only makes sense that they would do the same with their human friends.

Some cows will even learn to come to their name and will follow you when you request it, not unlike a dog might do.

3 tips to bond with your cow

We know that cows will bond with humans and that these bonds can be strong. But how does a person foster the bond with their cow?

If you happen to be a hobby farmer, you may be interested in keeping a cow for a pet. In fact, many websites about hobby farming will tell you cows can make great pets.

Unfortunately, many of these hobby farms, as well as the large modern farms of today, do not allow for cattle to form and/or maintain friendships.

Keeping one or two cows as pets is not recommended. Unfortunately, while the basic needs of the cows may be met, this is not the best situation for the animals emotionally.

Cows deprived of friendships often become depressed, bored, and/or anxious. It is best to keep them in a large group, in line with their nature. This is not to say you can never own a cow as a pet. It is, however, best for your cows if they are allowed a larger group in which to live.

Interesting READ  What To Do If My Cow Is Not Eating? (Causes, Complications, and Remedy)

Additionally, while cows are generally harmless, it is important to always use caution when attempting to bond with your cow.

Even the most gentle of cows could pose a threat in certain situations where they might accidentally trample or otherwise injure, maim, or kill a person.

It might sound fairly basic, but another one of the best ways to bond with your cow is to spend time with them where you can.

Cows who are given names, for example, are said to be happier. Studies have shown that cows with names produce more milk than their unnamed counterparts.

Cows respond well to kindness and will learn to love us when we spend lots of time with them. Additionally, when cows are cared for, and their needs are met, they have lower stress levels.

When humans take the time to observe their cows, they will be more likely to ascertain anytime one of their cows has a health issue or other problem.

As explained previously, cows love to groom and snuggle with each other. If you want to bond with your cow, one of the best ways to do so is to spend a lot of time petting, scratching, and snuggling with them.

At first, a cow may be anxious and fearful of humans. It takes time to earn their trust.

With a new calf, for example, you may have to sit quietly near them and let them take their time to come to you.

In time, you will gain their trust, and they will feel safe enough to let you pet them. Be patient if your cow is not ready to let you close.

The more time you spend, the faster they will learn you are not a threat.

Cows respond well to rewards. This can be a pat on the back when they do something to win your approval.

You can also give them one of their favorite treats like alfalfa, apples, carrots, or other goodies your cow may enjoy.

Some additional treats your cow may enjoy include:

Remember what your particular cow seems to appreciate as a reward, and keep giving it!

In conclusion, cows show affection in various ways that are common for all animals. This includes licking, nuzzling, and following their bovine friends as well as human companions.

Cows need to be allowed to form lasting friendships to be happy and give and receive the affection they need to thrive. Caregivers must give their cattle ample opportunity to be together.

Caregivers, in turn, can bond with their cows by petting and scratching them, snuggling, and rewarding them with plenty of affection and treats.

Cows that have the opportunity to feel cared for and loved by each other and their owners are more content and have lower stress levels.

What To Do If My Cow Is Not Eating? (Causes, Complications, and Remedy)