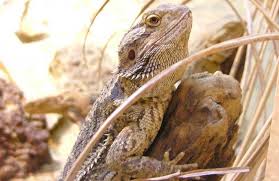 Bearded dragons are among the most popular reptiles to keep as pets due to their relaxed and calm demeanor and their simplicity to care for. If you have ever had the pleasure of caring for one of these amazing reptiles then you probably already know how amazing they are as companions and how interesting some of their behavior can be.

You might have even wondered about where bearded dragons come from and what their life might be like in the wild. It’s hard to look at their mild mannered, easy going, adorable little faces and not wonder about their quality of life in nature.

Bearded dragons have survived in the wild for quite some time and have now made their way into our homes and hearts; but how do they survive so well in nature?

Truth be told, bearded dragons have an extensive list of survival techniques and adaptations that make it possible for them to not only survive but to thrive in nature. Bearded dragons are experts at adapting to not only their surroundings and habitat, but their food sources, water availability and consumption, and even their mating and courtship rituals have all been designed and refined to successfully allow the bearded dragon to thrive in nature.

Your spiky little companion comes from a long line of adapting and surviving wild bearded dragons and still carries the same adaptive features of their wild kin. Bearded dragons are laid back and docile by nature making them the ideal reptilian pet; so how do they survive the big, bad world when they themselves are so small and calm?

Bearded dragons are native to Australia and prefer warm, arid environments such as deserts, subtropical woodland areas, shrublands, and savannas. Bearded dragons are semi-arboreal and are likely to be found perching in trees or on tree trunks, rocky shelves and outcroppings, and even in suburban areas and neighborhoods on fence posts or in someone’s garden.

Bearded dragons are highly territorial and have no issues fighting for dominance and will perch up high to show other bearded dragons that he is the boss and that is his area, if any bearded dragons come close, they will have a showdown on their paws.

Along with perching, basking in the sun is among their favorite activities and aids in their requirement for warmth. Bearded dragons require high temperatures and will often be found relaxing on a rock, even into the evening hours, as rocks absorb heat from the sun and will in turn keep the bearded dragon’s cold-blooded body at the appropriate warmth for its survival.

Interesting READ  What Do You Feed a Malnourished Bearded Dragon? 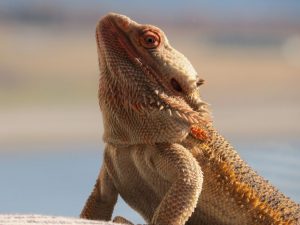 Even bearded dragons need a break from the heat and sun from time to time and are known to burrow underground if the heat is too extreme or will find some shade when they need to cool down. Bearded dragons moving from sun to shade, warming up and cooling down, is part of their adaption process for thermoregulatory behavior, and plays an important role in maintaining body temperature and regulating digestion.

Due to the cold-blooded nature of bearded dragons and their need for high temperature climates, bearded dragons will partake in a semi-hibernation known as brumation during the winter months to reduce their metabolism due to the lack of proper food consumption and heat needed for proper digestion. Bearded dragons are also the perfect color for camouflage in their natural habitat, which will help protect them from predators such as birds and larger reptiles.

Bearded dragons are full of surprises and have made several strides in adapting to their natural habitat and taking this information from their wild counterparts, you can provide the perfect enclosure for your beloved pet bearded dragon.

Due to the high temperatures of their natural habitat, food can become scarce for many animals, but bearded dragons are not picky when it comes to their food. Bearded dragons have been blessed with strong jaws that are perfect for crushing hard-shelled insects and clamping down on the occasional small lizard or even a small rodent.

Bearded dragons are perfectly built for surviving in dry, arid climates and they require little water to get by and are capable of receiving part of their hydration needs through their food. When hydration is needed, bearded dragons will lounge in water if it is available to get a few good drinks, or will wait for the rains.

The body of a bearded dragon has a special ability in aiding with their hydration; when it rains bearded dragons will tip their noses downward to allow the water droplets to run down into their mouth or they will make use of the ridges on their back to store water droplets for when they are needed, by using a similar process, bearded dragons will lift and tilt their bodies upward and forward in order to allow the water to drain down their bodies and eventually into their mouths.

This adaption will also come in handy for you as a bearded dragon owner when it comes to maintaining the hydration of your beardie, you can mimic this phenomenon and behavior by misting your bearded dragon’s body with a spray water bottle. 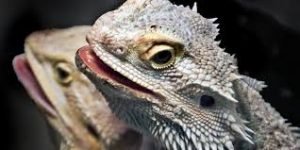 The survival of any species relies on the ability to mate and produce viable offspring, and bearded dragons are no exception. In order for the male bearded dragon to catch the attention of a female, they will perform an interesting ritual with impeccable showmanship.

By stomping his feet, rapidly bobbing his head up and down, and waving his arms, the male bearded dragon will pull out all of the stops in order to attract his female. If the female accepts his offer to mate, she will slowly bob her own head up and down and wave her arm as a sign of submission and willingness and readiness to mate.

Bearded dragons never cease to amaze with their advanced ability to learn and adapt no matter the situation in order to achieve the highest chance for survival, especially in the wild. If you own or have owned a domesticated bearded dragon, you may have noticed some of these behaviors and abilities and their impressively high intelligence; their wild counterparts are no exception.

In order to thrive in the deserts of Australia, bearded dragons have adapted an array of different abilities and each one is just as fascinating as the last. Regardless of their calm and laid back demeanor and adorable appearances, bearded dragons are extremely impressive in their ability to adapt and change when the situation calls for it. 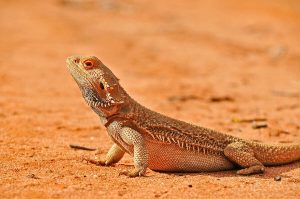 The beautiful color of bearded dragons, along with their love for basking in the sun and high temperatures, ability to hydrate through multiple sources, and interesting mating practices, bearded dragons have perfectly adapted to the extreme conditions of the Australian outback and will continue to thrive and survive.

Even though the export of wild bearded dragons was banned in Australia in the 1960s, they are still being bred for the pet trade in the United States and have even developed some interesting and beautiful color morphs not found in the wild, so you can own your own piece of these amazing creatures.

What Does It Mean When A Bearded Dragon Waves At You?

What Should I Feed My Baby Bearded Dragon?

How To Tell If Your Bearded Dragon Likes You? (7 Signs)

What Do You Feed a Malnourished Bearded Dragon?