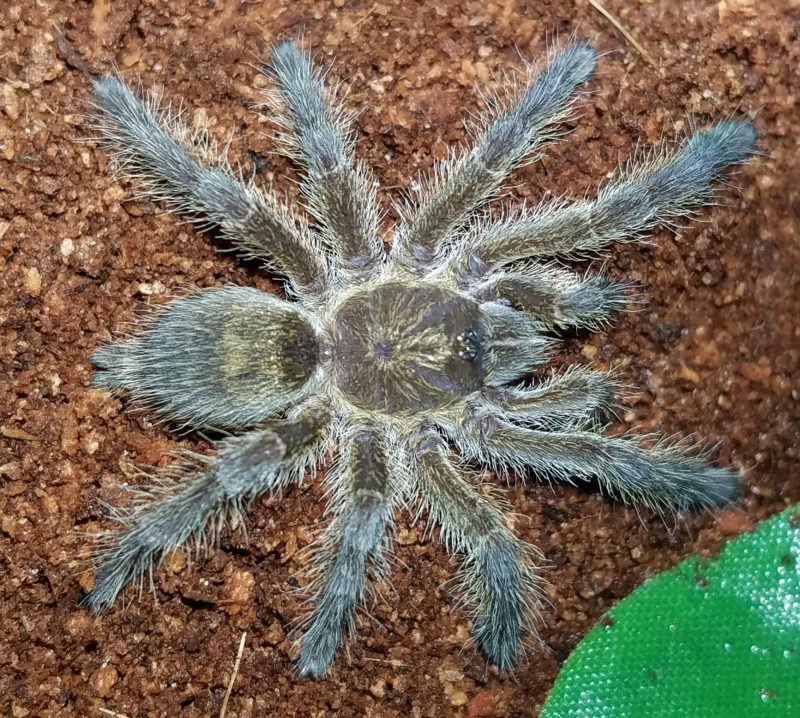 Harpactira namaquensis, better known as the Bronze Baboon, is one of the more stunning but often overlooked Old World tarantulas. Many hobbyists and caregivers tend to look to the Asian varieties of baboon spiders. Still, I believe the African ones are worth another look.

Originating in South Africa, the Bronze Baboon prefers warmer, temperate climates. They are used to having a dry season with moderate rainfall during the year and somewhat cool winters.

As long as you have a climate-controlled household, this is one of the easier biospheres to imitate. They prefer a room temperature around 72-82 degrees Fahrenheit. Still, they are used to temperatures above and below that with the changing of the seasons.

In most cases, females will reach maturity around two years. A female Bronze Baboon can even reach up to 6 inches in size! As with most tarantulas, the data on males is a bit harder to find, but most people agree they’ll grow up to around 3-4 inches.

In the wild, the Bronze Baboon females will keep to their burrow unless they are hunting. They do not possess urticating hairs, so they rely entirely on their speed to escape, or their fangs. The fang size is somewhere over a centimeter in length. It doesn’t sound too long, but if they do bite you, it’s going to feel like a nasty bee sting.

The Bronze Baboon is a fascinating specimen and excellent for someone looking to try out a Baboon but doesn’t want to worry about the aggressive tendencies. They also are a more exotic species that a lot of collectors and enthusiasts forget about.

If your interest in this tarantula has peaked, then we have some interesting facts for you. These tidbits will give you a great jumping-off point into the world of the Bronze Baboon.

They Are Amazing Burrowers

The harpactira namaquensis and any other members of the Harapicta genus are excellent burrowers. They’re the perfect spider if you’re looking for a tarantula that likes to stay underground a lot while building stellar webs. Since Bronze Baboons love to burrow, you should make sure that your terrarium has plenty of easy-to-manage substrates so that they can tunnel wherever they want.

An ideal terrarium for them will have a lot of substrates and not as much open space between the top of the enclosure and the ground. You don’t want to have to worry about them climbing too high and falling, as this could seriously injure or kill them.

Out in their natural habitat, they mostly stick to burrowing in soft dirt and only come out to feed or mate. When setting up a terrarium for them, you should keep this in mind so that they can feel more at home.

Don’t be alarmed if the tarantula seems to be keeping to their burrow most of the time. In the wild, they will spend months burrowed, venturing out only when no one is around.

Baboon spiders tend to move very quickly. They hunt fast, and they bolt even faster.

Plenty of the old-world baboons will aggressively run towards you if you’re not being careful. The Bronze Baboon tends to move in the other direction. They can bolt back into their webbing or burrow before you even notice that they’re there.

Due to their speed, extra care needs to be taken anytime you’re opening their terrarium. Move slowly and take your time changing their water dish, moving items around, or feeding them.

The last thing you want is for them to bolt and escape or, worse, bolt and bite you. As with many tarantulas, you should only be disturbing their habitat when it is necessary to do so.

If the tarantula is moving a bit sluggish, monitor it for a few days. It could just be preparing to molt, but it may require more food or water as well.

A good sign that the spider is still healthy is if it initiates a threat pose. If it doesn’t, something a bit more serious might be going on.

Extra caution needs to be always taken with harpactira namaquensis. Although they’re more docile than other old-world spiders, that doesn’t mean they won’t bite if they feel threatened.

Their venom isn’t as bad as some of their cousins, but it still is considered medically significant. Captive-born spiders haven’t learned to control their venom until much later in life, and they can hit you with a lot more than intended if they tag you.

If you see the spider in a threat pose (lifting their front legs up and pushing their body back a bit), don’t panic, but slowly back off so that they can cool down. They probably feel that they have been backed into a corner and are preparing to bite.

The Bronze Baboon is one of the more exciting tarantulas when it comes to hunting. As with most slings, they’ll need small fruit flies or small crickets that are pre-killed.

They also can go months without eating. Of course, that doesn’t mean that you should ever not feed your tarantula, but don’t worry too much if they’re refusing food.

They might just be preparing to molt. These tarantulas are used to keeping to themselves for long periods of time and can survive off very small amounts of food.

If you’re interested in watching this tarantula feed, you’ll have to wait until it reaches maturity to see it at its peak. At first, it is just going to scavenge whatever you give it until it increases in size. Once the spider has been through several molts and is large enough, watching it hunt is fascinating.

Interesting READ  What to Do if You Find a Tarantula in Your House?

If you find your Bronze Baboon isn’t burrowing, they may also be keener on webs. Many tarantulas in enclosures will choose to web and create their little burrow.

Since they enjoy webbing a lot, you should make sure to keep items in their terrarium with plenty of anchor points. Small leaves or sticks are great little items for the tarantula to build off and create their massive web.

The Bronze Baboon will probably spend a lot of time in their web and retreat into it whenever they feel threatened. Therefore, the main care that you should take as far as the web goes is to remove any carcasses of previous kills periodically. Doing this will ensure that the spider has a nice and clean home.

If you have never taken care of a tarantula before, then this is not the species for you. However, if you’ve been fascinated by all the chatter in the tarantula community about the “Baboons” but want to dip your toes in slightly, this is an excellent specimen.

Since they’re more likely to bolt than bite, daily care isn’t as challenging. In addition, they have a longer lifespan than many other Tarantulas, living up to 12 years for females and three years for males.

The Bronze Baboon is a genuinely unique specimen. It will catch the eye of tarantula enthusiasts, as well as any guest who wants to check out your spiders.

They create amazing-looking habitats and keep a relaxed attitude, which makes them pretty low maintenance. They’re intelligent and voracious hunters but stick to a standard diet.

Bronze Baboons are most likely not found at your local big-box pet stores. Instead, you’re going to want to get one as a sling (or older) from a reputable breeder.

There are plenty that you can find online who will ship the spider to you, or if you’re unsure about using the mail, find a breeder within driving distance. A unique species like this is not found just anywhere, so make sure you do all the research about where you purchase it.

Many breeders will also make sure that you know what you are getting into. Taking care of a tarantula like this is a long-term commitment, and they don’t generally want to sell to just anyone. In addition, the breeder doesn’t want to be held liable for any spider bites, especially when it comes to a more venomous species like this one.

Harpactira namaquensis is a truly beautiful-looking tarantula. With their relaxed attitude and simple diet, they’ll make an excellent addition to any collection. Always take care of them with caution and know that they can tag you with medically significant venom.

However, if you choose a Bronze Baboon as a pet tarantula, its life can be long, enjoyable, and rewarding. The world of exotic pets is a very fulfilling hobby, and you can contribute to it by being an excellent caregiver who does their research.

Can Two Tarantulas Live Together?

What to Do if You Find a Tarantula in Your House?