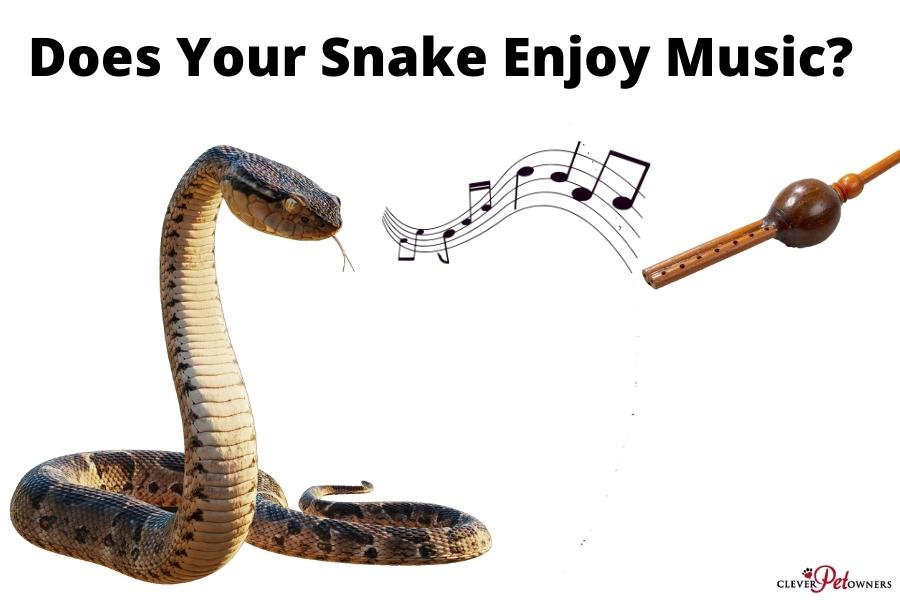 When snakes and music are mentioned, it often brings to mind the image of a snake charmer playing the flute to entrance a snake.

Yet many others have long held the belief that snakes don’t hear anything at all. They have no visible external ears that we so often associate with the ability to detect sound waves.

So, which is the truth? Can snakes really hear music? Or is their world entirely silent? To find out, we must first look at the anatomy of a snake.

Contents hide
1 Can Snakes Actually Hear?
2 Do Snakes Respond to Music?
3 Does Your Snake Like Music?
4 How to Enjoy Music and Keep Your Snake Happy?
5 Conclusion

Do snakes have the anatomy to hear? The answer is yes. But not in the same way we do.

Snakes don’t have any of the external ear structures we are most familiar with. In fact, they lack the structures of both the outer and middle ear. There is also no eardrum.

Snakes do have tiny ear holes on the sides of their heads. But instead of leading to an eardrum, it leads directly to the ear bone structures inside its head. This is known as the inner ear.

In a human ear, the eardrum vibrates when sound waves reach it. These signals travel to the inner ear, where it’s then sent to the brain to be processed as sound.

For snakes, instead of an eardrum, there is a piece of bone. This is called the quadrate bone, which connects the inner ear to the jaw.

The quadrate bone senses vibrations through its jaws, where it then travels to the inner ear and onto the brain. Snakes can adjust their jaws to better sense the direction of the source of the noise.

A snake can also detect vibrations through the ground with its whole body.

Nerves in the spine sense the sound waves and send the signal to the brain, where it is also processed as sound. This is called somatic hearing.

What do snakes hear?

A snake’s strongest sense of hearing comes from detecting vibrations through the ground. This can help aid its stronger senses of sight and smell to detect oncoming prey or potential danger.

They can also sense some sound waves moving through the air if strong enough. Studies have shown they best detect vibrations in the range of 80-300 Hz. These are considered low or bass tones.

Snakes actually cannot hear any of the sounds they make themselves. These noises don’t fall in the correct range. A snake can’t even hear itself hiss.

Studies on this have determined that snakes don’t communicate with each other in an audible way. Any sounds they make are purely for warning off potential predators.

You may notice your snake seeming to respond to your voice, though. The adult human voice is usually in the range of 80-255 Hz, while child voices tend to be too high for a snake to detect.

When they hear you speak, a snake’s curiosity may be peaked, and you might witness them drawing near to investigate the noise. Some people believe it means their snake enjoys the sound of their voice.

While that may be difficult to prove, it can be that your snake associates that particular sound with you and has determined you are no threat. So they feel comfortable responding to the noise.

Do Snakes Respond to Music?

Snakes don’t hear music the same way we do. There are some things we experience that may be close, though. Imagine you are being approached by a vehicle with a subwoofer blaring a heavy bass.

Often, before you are even aware you can hear it, you feel it. You sense the vibrations through your whole body, and you know a very deep sound is drawing near.

That’s because your eardrum also detects the waves, and the signal is processed in your brain as sound.

Snakes would also be able to hear that approaching vehicle. They listen to what they can feel, including music. If the sound is loud enough, deep enough, and close enough, they can sense the vibrations.

How does music sound to them?

Snakes can only sense the low tones in a song.

Much like the subwoofer analogy, they can hear the bass tones without being able to detect any of the higher pitches.

To give you an example of an instrument snake could hear, timpani drums have a range between 90-350 Hz (hertz) when played. A flute, on the other hand, usually has a range from about 260-2090 Hz.

So, if you were to play something like pop music, which is often pitched higher, snakes would only hear certain parts of the song.

But music with a deep, heavy bass would be sensed quite well, especially if it’s deafening.

The image of a snake charmer playing their flute to a completely mesmerized snake is well known.

And it would certainly suggest that the snake enjoys the sound. However, they likely can’t even hear the flute being played. In this case, it is the movement of the snake charmer that attracts its attention.

There is actually no evidence to suggest that snakes “enjoy” music. Music with a heavy bass presence may draw a snake’s attention. But this tends to be curiosity more than anything.

They are often investigating the source of the noise. And that is because, for snakes, the ability to sense noise in these frequencies helps them detect approaching danger.

While there’s no evidence that snakes enjoy music, the opposite seems to be equally true.

There isn’t much evidence to suggest they dislike it either. Most snakes seem to be indifferent to the sound, with many people reporting that their snake shows no reaction to their music.

But not every snake is the same. Because its sense of hearing is often used to help warn them of approaching predators, they may be alarmed by the sounds.

Music that is too loud or played too often has the potential to stress your snake.

How to Enjoy Music and Keep Your Snake Happy?

Your snake may be fine with music.

Always monitor your snake’s reaction to stimuli, including sound. This will help you determine if the music is disturbing them or not.

Your snake may be accustomed to it if you regularly play loud music. They don’t associate the sound as a possible threat. It can initially draw its curiosity, much like any noise they hear.

They may come out to investigate the first few times. Maybe it will draw their attention every time. Each snake is different. But snakes develop a sense of routine based on your life.

If music is a regular part of your day, the noise becomes a routine part of its day.

If your snake is stressed by music

This does not mean that every snake will have the same reaction. Some snakes, especially ones new to your care, may be stressed out by repeated loud noises.

Snakes also have the fight or flight response.

Within its enclosure, your snake cannot escape the noise. If they believe the sound is a sign of approaching danger, not being able to flee can cause them great distress.

They will be in fight mode, which puts a lot of stress on the body. Too much stress can lead to your snake developing health issues.

Signs of stress would include things such as:

If your snake shows signs of stress when you play your music, the best option would be to move them to a quieter room.

If you cannot relocate them, try listening to your music in another room to lessen the noise. Or use headphones or earbuds to enjoy your music.

The health and comfort of your snake should always take precedence over your music.

Like many snake owners, you may find that your snake is entirely unbothered by it. However, always be on the alert for signs of distress.

If your music does bother them, take the appropriate actions to make your snake comfortable. They depend on you entirely, and it’s your responsibility to ensure they live a long and healthy life.

Snakes have unique ear anatomy that enables them to hear low frequencies.

This sense allows them to detect oncoming prey or danger. Snakes can also hear parts of music that fall into the correct range. Music with strong bass tones would be easy for them to hear.

While snakes may not enjoy music, many are entirely unbothered by it. Most people will be able to listen to their music without any issues around their snake.

Snakes develop a sense of routine based on their usual activities. This includes becoming accustomed to certain noises.

But closely monitor your snake to best determine its reaction. Sometimes the signs of stress can be subtle.

If they display signs of stress, make the necessary changes to their environment to ease the discomfort. This will help to keep your snake both happy and healthy.