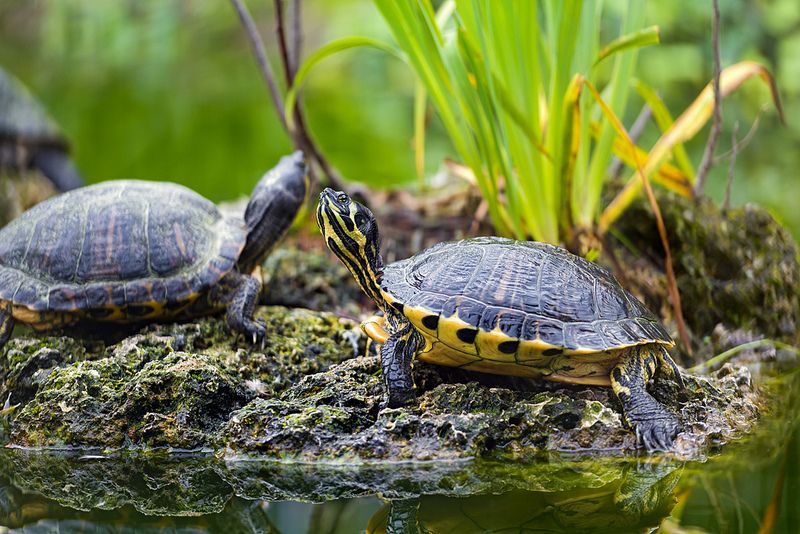 Turtles are known to be shy creatures, but like any other animal on the planet, they bully each other.

Turtles that bully others may do so by using their size or weight as a weapon, exhibiting aggressive behavior such as biting or chasing another turtle until they give up, or even stealing food from another turtle’s nest.

They may also exhibit passive behaviors such as intimidation through staring at the victim with their mouths open wide.

Six Factors Causing Turtles to Bully Each Other

There may be a variety of reasons causing turtles to be aggressive with each other.

Turtles come in many breeds, and some are more aggressive than others. For example, the larger Galapagos Tortoises tend to be more aggressive than smaller turtles like the Red-Eared Sliders. It would help if you always researched your turtle’s breed before deciding where to get it and its specific needs.

Male turtles are usually more aggressive than females. However, this does not mean that female turtles won’t get aggressive towards other turtles or humans at times. Females will often get aggressive when they are laying eggs or when their nests are threatened.

Young turtles tend to be more aggressive than adults. This is because they are still maturing, and their shells have not finished growing yet, so their carapace cannot protect them very well from other turtles, causing them physical harm. It is always best to keep young turtles separate from more mature turtles to prevent fighting.

Turtles that are kept together or near one another in the same environment will often fight. Turtles should be housed individually, especially if they are not of the same breed or gender.

If you have two or more turtles, it is best to accommodate them in tanks that are twice the length of their carapace. Turtles should not be housed next to or directly view one another.

Turtles can become very aggressive if they have not been looked after correctly. This is because they won’t have had a chance to build up their immune system and fight any common ailments. When turtles fall sick, they become weak and much more vulnerable, leading them to bully others into finding food. Suppose the turtle continues living like this for an extended period.

In that case, it will slowly develop into a habit – the turtle will begin bullying its tank-mates no matter how healthy it is!

Turtles are ectothermic, which means they obtain their heat from their surrounding environment. When turtles are kept in small enclosures, the ambient temperature is not enough to provide them with proper amounts of heat. This causes some turtles to become very aggressive because they feel threatened due to a lack of warmth. It is recommended to have an ambient air temperature of at least 75 degrees Fahrenheit.

Seven Ways to Prevent Turtles From Bullying Each Other

There are many ways to prevent turtles from bullying one another. The following are some ways:

If your turtle doesn’t have his own living space, there’s a good chance he’ll bully other turtles in the tank with him.

Similar to school or prison, if there isn’t enough room for everyone who wants to get along, some people will get left out and eventually turn against each other! At least give them their enclosures so they can feel safe with their territory.

Turtles often become territorial when they’re born and don’t like others interfering with their home turf. If you decide to add a turtle friend, be sure that your other turtle has been in their tank alone for several months before introducing a new turtle.

You should also always quarantine any new turtle additions to prevent any harmful infections from more aggressive tanks taking up residence in your more mellow tank.

For all of your turtles to get along correctly, you must follow proper water maintenance routines. If one of them is being bullied because he’s missing some limbs from a previous altercation that you overlooked, then the water quality probably isn’t good enough for all turtles to get along.

Make sure your turtle’s home has a steady source of clean water, and always keep an eye on the pH level.

Provide enough room for each turtle

If your tank is too small and your turtles can’t find a way to separate themselves from each other, they will fight. The more room, the better! They’ll be able to spread out their daily routine and give everyone some personal space if you use larger tanks.

Interesting READ  Why is My Turtle Head Twitching? Is it Normal?

If you like having multiple turtles, make sure that there’s plenty of living space for them all. Having an extra tank around and giving your pet more space will prevent them from getting bullied by other turtles because he doesn’t have anywhere else to go.

If you’re wondering how to prevent turtles from bullying each other, then you need to make sure that they are getting enough vegetables in their diet.

If one of your turtles is constantly hungry because he only gets the occasional piece of lettuce for a snack, then there’s a chance that he might try to take his anger out on another turtle who has more food than he does. Ensure all of your turtles have healthy portions of veggies and fruits throughout the day so that no one feels like they’re being left out.

Pay attention to each turtle’s personality

Every pet is an individual with a unique personality. If you have a turtle who enjoys being on his own, he probably won’t get bullied as much as a more friendly turtle. Some turtles want to be left alone. Some may even lash out from being touched too much by another turtle. Make sure that everyone is getting along well before trying to make them interact with one another.

Be aware of any signs of illness

Sometimes people don’t understand what it looks like when their pets are feeling under the weather, but you should always pay attention to how they act when they’re sick.

If you notice that your turtles are constantly ill or they aren’t eating regularly, there’s a good chance they might start bullying each other. If one of your turtles looks more tired or sluggish than usual, he might try to pick on the other pets because he has nothing else to do.

Turtles are often found in many different environments, and they all have their own needs that need to be met. This is why turtle owners need to know what those needs are and ensure they’re being met accordingly. Turtles are social creatures, and as such, they form groups. These turtles can be of the same species or different ones.

Will Snapping Turtles Attack Swimmers Or Other Animals?

How To Make Your Turtle Not Afraid Of You?

Why Is My Turtle Not Moving?

How Long Can Turtles Go Without Water?

Can Turtles Breathe Upside Down?