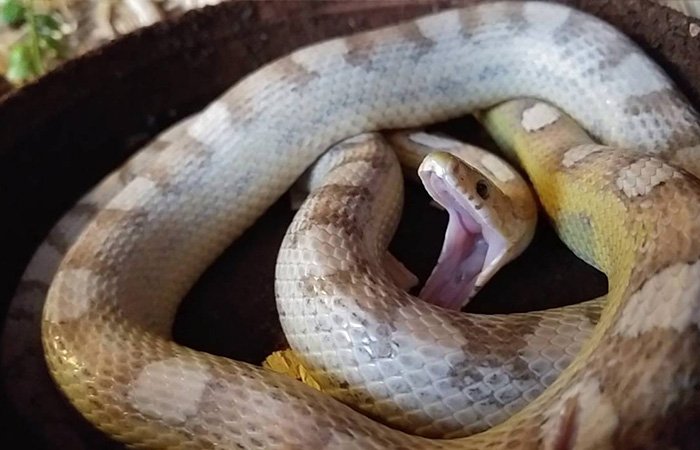 Many pet owners have seen their furry friends yawn. But what about our scaly pets? When can we expect to see our snakes yawn?

While other animals yawn when tired, that does not hold true for snakes. Snakes can be seen yawning at seemingly random times, before or after mealtime, or when they are sick. That being said, snakes do not yawn when they are tired.

Why Do Snakes Yawn?

Why Humans And Animals Yawn

Humans yawn when tired, but this isn’t the only function of yawning. Yawning brings fresh air into your lungs and cools your blood as it flows to the brain. Well, that can’t be one of the reasons snakes yawn, because they are already cold blooded!

Cooling down it’s blood wouldn’t serve a snake any purpose, so they certainly don’t yawn because of that. Dogs yawn when nervous or anxious as a way to calm themselves down.

But snakes aren’t seen yawning in stressful situations. If a snake is stressed, it may retreat to a hiding place and curl up, or if it feels threatened, it may hiss, get into a striking position, or even play dead.

Fish yawn to clear their gills and as displays of dominance. Snakes are far more concerned with survival than dominance, and, more often than not, they are very solitary creatures.

And they don’t have gills, so they certainly don’t yawn for that reason!

How To Know If Your Snake Is Tired Or Sleeping 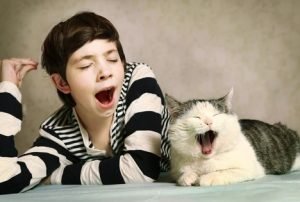 But how do you know when your snake is tired or even sleeping?

It can be difficult to know when your snake is sleeping because they do not have eyelids! Snakes do not blink or close their eyes because they physically can’t.

They do however have an “eye scale”, more accurately called a brille. Normally, this cannot be seen, as it is completely transparent.

The only exception is when snakes are getting ready to shed. In that case, a snake’s eyes take on a bluish, opaque tint.

However, this isn’t any indication of if your snake is tired or sleeping. So, we can say that looking at a snake’s eyes isn’t very helpful for determining if they’re asleep or tired.

So instead of looking at their eyes to know if your pet is asleep, you have to look at their body. Are they out and about, active, exploring, flicking their tongue?

No? Are they relaxing somewhere dark, in one of their hides, and not moving?

Then they are probably asleep! Imagine if you couldn’t ever close your eyes. You’d probably want to be hidden away somewhere dark, too.

Snakes sleep around 16 hours a day, but this number varies based on a variety of factors including species. Some snakes, like ball pythons, are nocturnal and prefer to spend most of the day resting before coming out to explore at night.

Interesting READ  How Often Should You Feed A Ball Python? (Every Stage in Life)

Garter snakes are diurnal, much preferring the warmth and light of daytime to adventure. Others are even stranger!

Corn snakes are crepuscular, which means they are most active at dawn and dusk and like to sleep both during the day and at night.

How long a snake sleeps also depends on the time of year. Wild snakes enter a pseudo-hibernation—called brumation—during winter.

They sleep longer, eat less, and are nowhere near as active as normal. It isn’t likely you will see any snakes while out hiking at this time, as they will sleep around 20 hours per day.

Wild snakes are most active during spring, as they will be very hungry after their winter brumation. This is when you will see them sleeping about 16 hours per day.

Similar to their sleeping habits during brumation, snakes also sleep more after eating to help with food digestion.

Most importantly to a snake, they want to feel safe when sleeping. It is one of the times they are most vulnerable, and so it is easy to understand why they go and hide.

The only conclusion we can come to is that snakes do not, in fact, yawn when they are tired. But many snake owners have seen their snake yawning.

So why do they do it? Let’s take a look at yawning before and after mealtimes as well as yawning while sick.

A common myth about snakes is that they are able to dislocate or unhinge their jaw in order to eat, but that isn’t the case. Instead, snake jaws are built in such a way that it can open very wide so as to eat their food whole.

Not only that, but their jaw is not fused together like a human or other animal’s jaw is, instead it is two bones connected by stretchy ligament at the front of their jaw. If you’ve ever watched your snake eat, you may have noticed it wiggling its jaw back and forth. 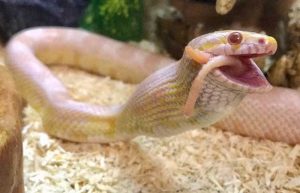 This is one of the many unique and interesting things about these scaly pets!

But it’s a lot of work eating all your food whole. While the jaw isn’t dislocated after eating, it can be misaligned.

So, snakes will often yawn after eating as a way to move everything back into its normal position. Now snakes do often sleep right after eating, so one may wonder if they are yawning when tired, but it is strictly to help with adjusting their jaw.

Interesting READ  Why Would a Snake Bite Itself?

They don’t yawn as they go and hide to sleep, instead directly after eating.

Alternatively, snakes may yawn when they’re hungry. This is because they are gathering information about their surroundings through an organ known as the vomeronasal organ, sometimes called the Jacobson’s organ.

This organ is located on the roof of their mouths and is part of the olfactory system in the body, meaning that it is involved with the sense of smell. Many animals, including animals, have this, and snakes may use it to learn about its surroundings.

This usually means it’s looking for a meal! They will also use tongue flicking for this purpose.

Yawning in snakes can also be an indicator that they are sick. Though we all hate to see our animals in pain or suffering, there is no denying that it is a useful tool for every snake owner.

Snakes have sensitive respiratory systems and are prone to upper respiratory infections. With correct care and husbandry, these can be easily avoided. Improper care can lead to stress, lowering your pet’s immune system and making them vulnerable to fungal and bacterial infections.

Make sure your snake’s humidity is correct for their species! A ball python requires higher humidity than a corn snake, for example, so if you keep your corn snake’s enclosure at the same humidity as your ball python, the extra moisture in the air may open up all sorts of bacteria to thrive and cause issues for your pet.

Other irritants in the air can lead to respiratory infections, such as smoke, fumes from essential oils, or dust.

If you see your snake yawning frequently, they could have a respiratory infection. It makes it difficult for them to breath, so yawning is a way to get more air in their lungs. 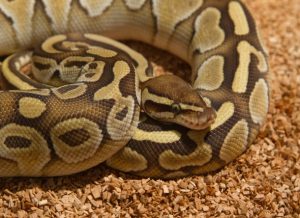 If you think your snake may have a respiratory infection, check for symptoms such as wheezing, gurgling, nasal discharge, excess mucus in their mouths resulting in bubbles around their mouth, lethargy, loss of appetite, and, of course, yawning. If you notice any of these symptoms, make sure to contact a reptile veterinarian.

Just like all animals and people, snakes yawn for a variety of reasons. Unlike many animals, however, they do not yawn when they are tired. Instead, it is a behavior linked to many other things such as hunger, adjusting their jaw, and being sick.

You can see this for yourself by watching your snake and familiarizing yourself with their behavior. Hold your snake, interact with it, watch it while it’s exploring and as it goes off to sleep, and watch it before and after it eats.

Not only is being more aware of your snake’s normal behavior very fascinating, it can also save your pet’s life. Any deviation from normal and healthy behavior is an excellent warning for pet owners, and that is true of any pet you may own, not just snakes.

Familiarizing yourself with your snake’s behavior is also the perfect excuse to spend time with your beloved pet!