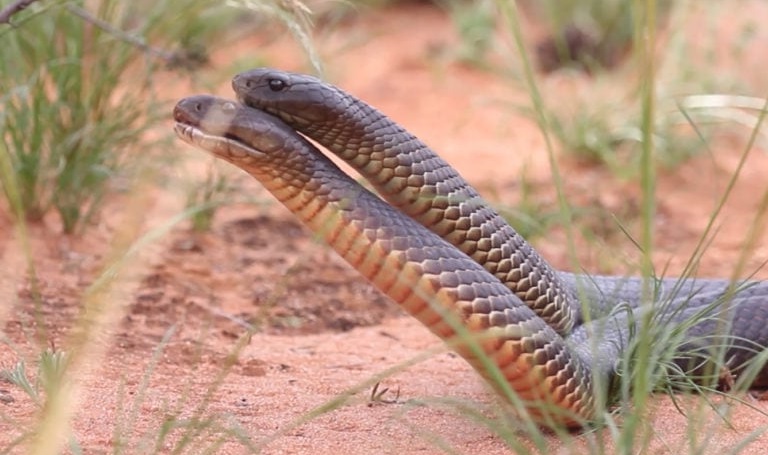 We may tend to think of snakes as solitary creatures, and for the most part, this is true. Most snakes spend most of their lives fighting for survival on their own.

As snake owners, we may sometimes feel sad for our snakes that have to be housed alone, but it is important to remember that this is usually more natural for them and a much safer option.

However, while most snakes only seek out other individuals under certain circumstances, some species can be pretty social at times.

Some can even form close partnerships and bonds akin to what humans would call friendships.

To learn more about why snakes tend to be alone in the wild and why they may sometimes form groups, continue reading.

Contents hide
1 Why Do Most Snakes Live Alone?
2 When Are Snakes Found Together?
3 Garter Snakes Are Exceptionally Social
4 Why Some Snakes are Housed Together in Captivity
5 Closing Thoughts

Why Do Most Snakes Live Alone?

Most snakes do not have a natural desire to stay in a community with other members of their species, as this does not serve much of a purpose for them in the wild.

To better understand why this is, we will review the main reasons snakes tend to stay away from each other.

Snakes Do Not Get Lonely

In general, reptiles do not require as much social fulfillment as seen with mammals and birds.

Because of their brain structure, snakes simply do not feel depressed as other creatures do when they are isolated.

In fact, most snakes develop in ways that allow them to be successful in the wild without help from others.

Most Snakes Have Adapted to a Solitary Life

Unlike other animals, snakes and other reptiles do not have the same parts of the brain responsible for communication with others.

Without a limbic brain, the life of a snake revolves around maintaining bodily functions and surviving.

Cohabitation Can Stress Snakes Out

Many snake species are timid animals in the wild that will become irritated upon having to share a habitat with another individual.

If snakes cohabitate in captivity, one snake may try to dominate the other, leading to a highly stressful environment where meals may not be divided equally.

One of the snakes may even stop feeding regularly if it is kept around a more dominant individual that is more likely to take prey items.

Snakes Can Be Aggressive Towards Others

While snakes do not necessarily express territorial behavior, they will sometimes try to attack each other if they come face-to-face.

Many species of snakes do not like to be near each other because some snakes can turn predatory under certain conditions.

For instance, some colubrid species like kingsnakes and corn snakes are known to be cannibalistic.

This means that smaller snakes will especially want to keep away from the larger members of their kind, especially as even adult males are typically smaller than females.

Overall, however, there will be limited interaction between most individuals.

Interesting READ  Can Snakes Be Emotional Support Animals? How to Register Them as ESA

Snakes Do Not Travel Often

Snakes are not migratory creatures, and they do not have strong navigational instincts, as seen with many flocking animals.

They tend to stick to certain locations where they can easily access food, water, and shelter from predators and the elements.

When they find an ideal location, they will want to stay there until there are no more resources to use.

Thus, there is less need for them to find other members of their species to travel with.

When Are Snakes Found Together?

We have gone over the many reasons why snakes are more likely to keep to themselves, but there are also occasions where they will look for one another.

In the wild, even the most solitary of snakes will eventually have to come together for one reason or another to survive.

Here are some of the major reasons that snakes may need to be around other individuals:

When it is time for snakes to breed, both males and females will begin seeking out a partner.

By releasing sex pheromones into the air, snakes can track each other’s scents and locate one another.

Even the most remote of snakes will eventually be able to catch on to this chemical trail so that they may breed and create a new generation of snakes.

Snakes May Hibernate Together

During snake hibernation during the winter months, which is usually termed ‘brumation,’ they may find a den that has other individuals.

In groups, snakes will be able to conserve heat better as they have no way to bask during this time.

This is especially helpful for snakes that live in colder or more temperate climates as opposed to arid and tropical environments.

Some Species Care for Their Young

Viviparous snakes that give birth to live young, as well as some egg-laying species, will keep watch over their offspring for some time.

Many egg-laying snakes will brood over their eggs to keep them warm and safe from other animals until they are ready to hatch.

In fact, some species of pit vipers and pythons will also stay with the baby snakes long after they have left the egg until they can fend for themselves.

As you can imagine, this decreases the likelihood that a predator will eat the eggs or newly hatched snakes, ensuring that the young reptiles will have a better head start at life in the wild.

While snakes are not typically known for their social skills or coordination, one species of boa has been known to hunt with others.

Cuban boas will sometimes hunt with other snakes to increase the likelihood of subduing a prey animal.

These snakes will hunt as groups in the caves and dens they reside in, striking at bats and other small animals in a coordinated manner.

We have discussed the few occasions that snakes remove themselves from solitude to seek the company of other individuals.

Interesting READ  Are Snakes Afraid of Cats and Dogs?

However, one species appears to prefer spending much of its time with others in the wild and in captivity.

Compared to other snakes, garter snakes are highly social reptiles, choosing to spend much more time among their own kind to increase their chances of survival.

For this reason, cohabitating garter snakes is not only an acceptable practice for snake owners, but it is also recommended for the health and well-being of the animal.

Garter snakes want to be housed in pairs or groups, as this can help drastically reduce their stress levels. When together, garters will follow the behavior and routines of their fellow snakes.

This may make them feel more secure against predators, as when they are in a group, they instinctually know that their chances of being attacked by something are lower.

Garter snakes will even form bonds with other individuals in a similar manner to what could be thought of as friendships in other animals.

In captivity, it is found that garter snakes will gather in cohorts with familiar individuals which they will prefer to spend most of their time with.

Why Some Snakes are Housed Together in Captivity

You may find that some serpentariums and zoos will choose to house certain species together even if the animals in question are often thought of as solitary.

The Pros of Zoo Co-Habitation

While co-habitation is not an advisable thing to do for most snake owners, some institutions have an easier time with it for a few reasons:

While this may seem like an interesting project to replicate back home with your own animals, it is best to leave co-habitation of non-social snakes to facilities with the means to do so.

As a snake owner, you would be right to question whether it’s a good idea to house certain species together or if it would be best to keep snakes by themselves.

After all, this co-habitation can cause a myriad of issues. In the wild and captivity, some snakes will try to fight or eat each other.

Most species will become stressed if other animals are present in their environment that increase competition for food and space.

However, as we have also learned, some species, such as garter snakes, thrive when they are around others of their species.

When keeping the natural habits of snakes in mind in terms of if or when they live in groups or alone, owners can have a better sense of how safe it would be to house certain species together.