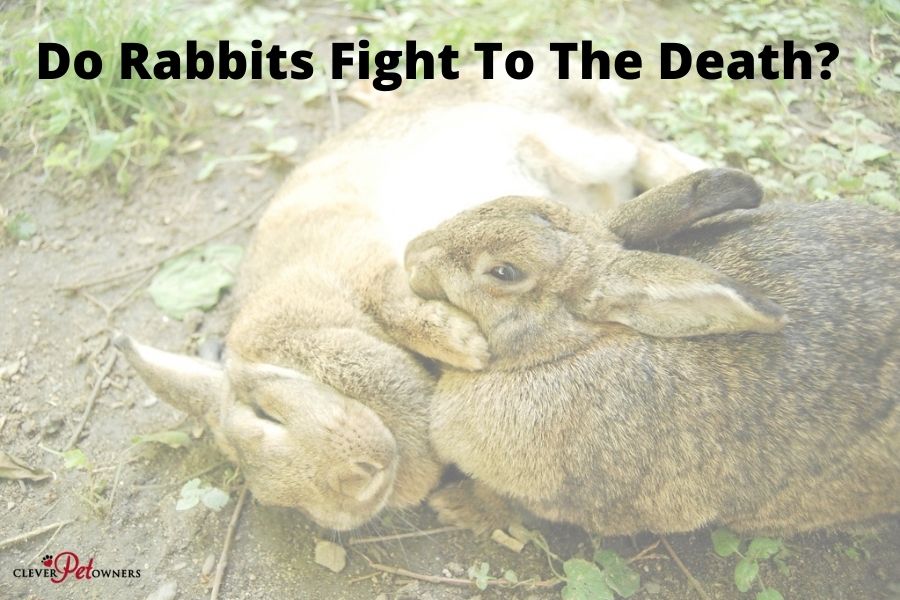 Have you ever wondered if rabbits may be capable of fighting to the death? Usually, rabbits are docile animals that thrive when living in groups with other rabbits. They love to socialize and spend time together.

However, fights among rabbits are inevitable and can sometimes lead to death if substantial blood loss occurs.

As a rabbit parent, you need to be able to spot the signs of an impending fight and know what to do if a fight seems severe enough that it may end in death.

Contents
Why do rabbits fight?
How would a fight kill my rabbits?
Six Signs of an overly aggressive rabbit
How to keep your rabbits from fighting?
Conclusion

Why do rabbits fight?

To better understand why rabbits fight, we need to understand their social structure.

The group of all the rabbits is called a warren. The highest-ranking member of the group is named the chief. The job of the chief is to make sure the rest of the warren is kept safe.

Typically, the chief is chosen because they have proven themselves to be the strongest member of the warren.

In some way, they have shown that they will be able to protect others from any threat of harm and will be able to ward off any intruders. A good leader will make sure their warren has everything they need.

In exchange, the chief will get the first pick of the resources. That includes letting the chief have their first choice of food, mates, and prime shelter locations.

Occasionally, there is a rabbit that does not want to go along with the leader, and they decide to challenge the chief for their standing. This would mean that the chief would have to protect their place at the top.

Challenging the leader can cause a potentially deadly fight as a chief will not freely give up their place in the hierarchy.

Wild rabbits are not the only ones who will fight to the death over resources. Pet rabbit fights can be just as bad.

Not only can rabbits fight over resources, but they will also fight because of hormones.

Another reason that rabbits fight is that they are not neutered or spayed. As with any other unaltered animal, rabbits have testosterone or estrogen surging through their bodies in large amounts.

This is responsible for their strong drive to find a mate and reproduce.

That internal drive causes them to be more aggressive in their search for a partner because they are driven by the hormones coursing through their little bodies.

Even after being neutered or spayed, there is still a period of time when the hormones still significantly affect them.

As a pet parent, it is essential to keep this in mind. Even if your rabbit is being kept with only one other rabbit, power struggles may still occur.

How would a fight kill my rabbits?

There are a few different ways that a fight would kill a pet rabbit. One possibility is that they have been bitten.

Their teeth are like two little pairs of scissors at the front of their face. If a rabbit attack ends in bites that break the skin, it is possible for the injured rabbit to suffer a significant loss of blood.

Their increased heart rate from stress would pump blood through their body quicker and make blood loss happen faster.

Rabbits have been known to cause great damage to the noses and ears of other rabbits during a fight.

That causes major blood loss as there are so many blood vessels in those sensitive areas.

If your rabbit has been bitten, be sure to take a careful look around as their fur may hide other areas of injury.

On the outside, it would be obvious to see if there is any loss of blood. However, if the claws or teeth do not break the skin, the rabbit could be suffering severe internal bleeding.

One way that rabbits fight is by kicking or hitting hard enough that it could cause internal damage.

If it is suspected that an internal injury has occurred, that would absolutely be a reason to call the vet so they can advise on the next steps to make sure there is no such internal injury.

Not only would a great loss of blood be a reason that rabbits die from a fight. It could also be that the rabbit was bitten or scratched, and the area has now become infected.

Any untreated injury that goes on for long enough can worsen over time.

If an infection is not treated by a trained professional, it may mean death for the pet, especially because rabbits are not particularly robust animals.

Rabbits are actually more delicate than they seem.

High levels of stress are enough to cause illness. If they are scared enough by an attack or a fight, they can die from the high level of stress that occurs during a fight.

Scared rabbits can develop stress-related illnesses that might end in death because of heart failure.

There are some immediate signs that a rabbit has aggressive tendencies.

Oftentimes, there is a mix of vocal and behavioral signs that can indicate aggression.

This is a vocal cue that often happens along with growling. These vocal behaviors are meant to ward off anything the rabbit feels might be a threat.

Most rabbits will do this to let the offender know they are uncomfortable with what they are doing.

Rabbits will hit their hind leg onto the floor to make a loud “thump” sound as a warning signal.

A quick, forward motion toward the individual that is causing distress to the rabbit is known as lunging.

It is a way to say the rabbit doesn’t like what is happening, and they are making it known they want their space. Most of the time, when a rabbit lunges, it will grunt or growl as well.

When an animal shows their teeth, it is a strong signal that something is going on, and the rabbit is absolutely not okay.

This is an extreme signal of stress and will act as a final warning before the rabbit makes a move to defend themselves.

Rabbits have a set of four front teeth that can become as sharp as scissors. They are a multi-purpose part of the anatomy that can be used to grind, tear, or cut.

If they become scared or angry enough, they can use their teeth to attack others, which could lead to a dangerous situation.

Interesting READ  Why Does My Rabbit Have White Poop?

It may seem cute when they stand on their hind legs, but if they also push their arms forward and swat, that is a signal that things may turn violent.

This stance is another way to indicate they are scared or defensive. Much of the time, when they are using this posture, they are ready for a fight.

How to keep your rabbits from fighting?

The absolute best way to keep your rabbits from fighting is to spay or neuter them. Not only will that reduce the number of aggressive behaviors, but it will also extend the life of your rabbit.

For up to six months, the rabbit will still have excess testosterone and estrogen in its system. During that time, it is crucial to make sure that each animal has its own space.

If the neutered or spayed rabbits are going to spend time with one another, make sure that time is spent in neutral territory.

This ensures that neither rabbit will have a territorial claim on the space and, therefore, will not need to aggress while in that area.

Another essential thing to give your pet rabbit is lots of space to exercise and play.

Exercise does not have to mean running laps around an area. It could mean that you give your pet some wooden enrichment toys that they can carry or chew.

Instead of feeding them into a bowl, scatter their food among an area with timothy hay, so they get to forage.

Searching for food is an instinct that rabbits have but do not get the chance to use since humans are the ones who are responsible for bringing them their food.

Another good way for them to exercise is to dig! Just because they may be indoor pets, rabbits can still have the opportunity to dig.

Get a tray that is safe for your pet and pack it with things that are safe for them to dig through.

Give them an incentive and hide some small treats throughout the materials to keep them engaged.

If you have provided everything above and your pets still fight, make sure you are able to quickly and safely break it up.

Keep in mind your safety and try not to grab at the animals. Rabbits are startled but sudden, loud noises. A loud clap may be enough to stop them in their tracks.

If not, try something flat and sturdy like a dustpan to get in between the two.

Rabbit fights can be scary to witness and can happen for many reasons.

The severity of the fighting can be reduced by altering the animal and by keeping them happy and healthy.

Fights are serious situations that need to be managed immediately so that they do not result in a fight to the death.

They need to be stopped as fast as possible to prevent serious injuries. If injuries occur, they may result in death.

Remember to give your rabbit a once-over to check for any injuries that may be hidden by their fur.

If there are any injuries, call your veterinarian for advice on treating the wounds at home versus in the office.

When Can Baby Rabbits Leave Their Mother?