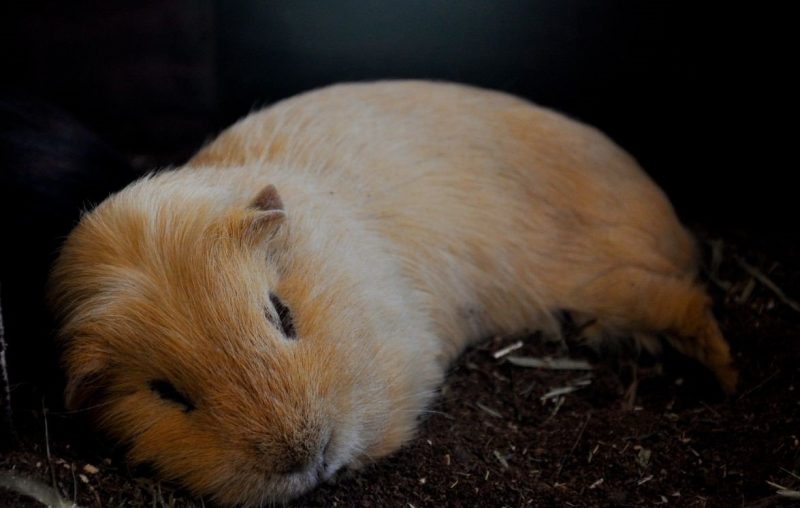 Anyone who has shared a room with guinea pigs knows they can be very active at night. At times it seems that just as you’re starting to fall asleep, they decide to drink from a noisy water bottle, chew loudly, play with every toy in the cage and run laps.

The noises we hear clearly show us that guinea pigs like to move around in the dark. But are they using their sight to navigate through the darkness or fumbling around blindly?

Can guinea pigs actually see in the dark? The truth is there is some debate about this.

Some believe guinea pigs’ eyes can see in dark environments. Others disagree, believing that in the absence of light a guinea pig’s eyes are less useful.

In this article, we’ll explore some of the reasons why people believe guinea pigs cannot see in the dark, why others believe they can and whether guinea pigs enjoy being in the dark.

Let’s begin by looking at how guinea pigs’ eyes work in general. The strengths and weaknesses associated with a guinea pig’s vision is a good starting point for thinking about whether guinea pigs can see in the dark or not.

Strengths include the following:

Weaknesses include the following:

Guinea pigs’ eyes have strong points and weak points. But does this mean that guinea pigs can’t see in the dark? Does it mean they can?

Some reasons why guinea pigs may not be able to see in the dark are:

Having Other Senses Help Them Navigate

Guinea pigs have whiskers around their mouths, noses and eyes which are made up of hairs called vibrissae. Vibrissae are often found on animals that are active at night.

The whiskers have nerves on the ends that help guinea pigs feel any object they touch. This helps guinea pigs navigate around objects in the dark.

Guinea pigs have sensitive hearing and a keen sense of smell which can help them to navigate in the dark. Because guinea pigs are unable to see more than a few feet in front of them, they rely on their other senses to help where their eyes cannot.

An example of this is with their food. Some believe that, because of the placement of their eyes on the sides of their heads, guinea pigs cannot see directly below them and rely on smell to locate their food.

Guinea pigs also rely on sound to detect threats that are too far away for them to see clearly. It is possible that guinea pigs rely on these heightened senses, and not on their eyes, to get around in the dark.

Some believe that guinea pigs use memory to navigate in the dark. If you have ever trained a guinea pig to use a litter box or perform a trick, you have seen firsthand how good guinea pigs’ memories are.

Arguments for guinea pigs being able to see in the dark are that:

Guinea Pigs Can Sleep with Their Eyes Open

If you have ever seen a guinea pig sit very still with its eyes open, you might have observed it sleeping. Many guinea pigs keep their eyes open 24/7, meaning that they sleep with their eyes open which can give them the appearance of being able to see in the dark.

It’s hard for some to imagine guinea pigs running and hiding from predators in the dark without using their eyes.

Guinea Pigs Are Active In The Dark

But we don’t hear them bumping into things or stumbling around. This might just be because guinea pigs can see where they’re going.

Interesting READ  What to Feed Guinea Pigs When Out of Food

Let’s look at how they cope. Do guinea pigs actually like the dark?

The answer to this is that we don’t know if guinea pigs like the dark. But what we do know is that guinea pigs are comfortable in the dark.

Guinea Pigs Spend A Lot of Time In The Dark

Guinea pigs are neither diurnal (sleeping during the day) nor nocturnal (sleeping at night). Instead, they sleep intermittently throughout the day and night.

On a daily basis, guinea pigs sleep a total of four or five hours in approximately ten-minute increments. This means that guinea pigs are awake most of the night and spend a lot of time in the dark on a daily basis.

Guinea pigs are comfortable when they have somewhere to hide. Many of us give our guinea pigs some type of hideout to retreat to, such as a plastic igloo.

When a guinea pig gets scared, its first inclination is to run and hide in that igloo or the nearest dark space.

Things Guinea Pigs Do In The Dark

As mentioned above, guinea pigs tend to be very active in the dark. While in the dark, they popcorn (jump around excitedly), eat, drink from their water bottle, exercise by running laps, socialize with one another and play with toys.

One would imagine that any being who does all these things in the dark, is pretty comfortable in the dark.

At this time, there is no research that demonstrates definitively whether guinea pigs can or cannot see in the dark. What we do know is that there are arguments for and against their ability to do so.

If you have ever chased your guinea pig around in a dark area such as a closet, under a couch, or any other dark place, you know just how well guinea pigs can navigate in the dark. Was your guinea pig able to elude your capture using its whiskers to feel its way through the dark or could it actually see where it was going?

We don’t have any definitive proof one way or the other, but we can form our own opinions! Listen closely to the sounds your guinea pig makes at night.

If it’s not pitch black and you can somewhat see your guinea pig, try observing what it does when it’s dark. Does it seem like your guinea pig can see? Is it happy in the dark?

Are Guinea Pigs Omnivores or Herbivores? You May Be Surprised!