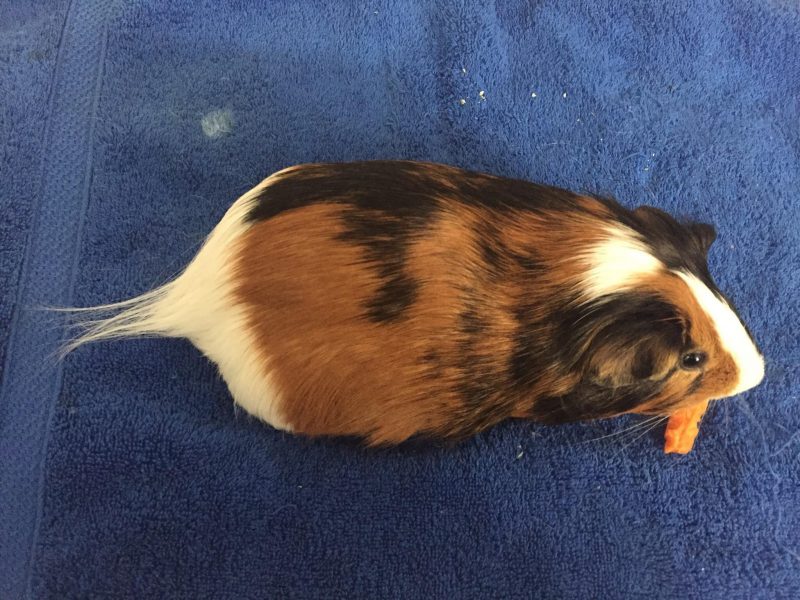 As a Guinea pig owner, you have most likely spent time looking at your Guinea from top to bottom. Have you ever wondered if your Guinea pig has a tail?

In this article, You will not only discover why your Guinea pig doesn’t have a tail, but you will also learn that your guinea pig is way more complex and exciting than you could have ever imagined.

The heterotopic contains the sesamoid bones.

For such a small pet, the Guinea pig skeleton is quite complicated. Two hundred fifty-eight bones make up his skeletal structure.

Like all mammals, Guinea pigs have a breastbone, ribs, and a skull; however, most of those skull bones are flat. All two hundred and fifty-eight bones help protect the major organs such as the brain, heart, and lungs.

The guinea pigs’ spinal cord has approximately 36 bones, the front legs have 43 bones, and the back legs have 36. Guinea pigs have four toes on their forefeet and three on their hind feet.

Wow, that seems like many little bones in such a tiny little creature, yet all those bones help your Guinea run, play, and forage for food.

While your Guinea pig loves being active, they leave the jumping, climbing, and even falling to other rodents, such as squirrels and rabbits, who are much more agile. Many rodents have similar features, but Guinea pigs are from a rodent family called cavies, and they were quite different from other rodents.

Cavies have short heavy bodies, and large heads, and no visible tail. The Cavy family consists of Guinea pigs and the largest living rodent, the Capybara, reaching heights of 20- 25 inches and weighing anywhere from 77 to 146 lbs. The Capybara, like the guinea pig, seems to be missing a tail.

The Guinea pig does not have just one tailbone; they have seven! You cannot see them because they do not protrude as rats or squirrels’ tails do; their tailbones are close together and tucked under the pelvis, just like a human.

Can you imagine how different your Guinea would look if he had a long tail? Take Rats, for instance; they have longer tails than any other rodent, usually the length of their body.

Rats curl their tail around their body for warmth, the colder the climate, the longer the tail. Rats also use their tail as leverage to reach high spaces while looking for food, and it helps them balance on fences and wires.

Much like rats, mice with long tails also use their tails for warmth and balance. Both rats and mice use their tails to help them escape predators because injury to a tail is less severe than their bodies.

Guinea pigs, on the other hand, have adapted to being tailless; they can conserve body warmth by burrowing, especially since they originally came from a warmer climate.

Guinea does not need to have long tails to balance, they do not climb or jump, and without a tail, predators have a more challenging time finding something to grab onto. This does bring up another question, though, why?

Why do Guinea pigs not have actual tails? Perhaps the answer lies in their history.

Even though it is hard to imagine, Guinea pigs have changed quite a bit over the last several million years.

Evolution And The Guinea Pig Tail

There is a good chance that your Guinea pigs’ ancestors could have had long tails just like other rodents. Fossil records of the Guinea pig go back to the Miocene period, over 18 million years ago.

As recently as August 2003, Archaeologists discovered what they believe to be a relative of the Guinea pig from 8 million years ago that was 9 feet long with a long tail. Guinea pigs’ ancestors looked quite different from their counterparts today; their coats had a grey pattern, like that of the wild rabbit, which provided them with a right camouflage level.

If Guinea pigs did have long tails, survival might have dictated that shorter tails or no tails at all meant the difference between life and death. The shorter the tail, the less chance of ending up a predator’s meal.

Over time, the guinea pigs’ tail possibly grew smaller and smaller until it was gone entirely.

This theory may explain why guinea pigs choose mates with the shortest tail; perhaps it is a trait passed from generation to generation to ensure the continued survival of their species until eventually there was no visible tail at all.  Although there is no scientific proof that Guinea pigs had long tails at one time, they were able to adapt somehow and flourish for over 18 million years. With or without tails, they are resilient creatures.

You may have seen Guinea pigs that look like they have a tail called a “fake tail.” All cavies have the same tailbone structure, which means unless there is a rare defect, guinea pigs do not have tails.

What you saw is known as a fake tail; guinea pigs, especially Peruvians, have little tuffs of long flowing hair that fans out and looks like a beautiful tail.

Some Guinea pig owners like to keep this tuft of hair, while others groom their guinea pigs to keep the hair tamed. Either way, Turns out that tail you saw was just a Guinea with a stylish dog.

Interesting READ  How Many Times Can A Guinea Pig Get Pregnant?

Now that you know a little more about your Guinea pig, you are equipped to care for your pet’s health and wellbeing. Even something as simple as understanding the difference between a tail and a tailbone can help you identify possible health concerns that may have otherwise gone unnoticed. Your veterinarian will appreciate that you can pinpoint any problem areas during your next Guinea pig wellness checkup. Keeping a close eye on your guinea pig’s health can be done while you groom, pet, or play with them.

Being more aware of your pet’s skeletal system can also help prevent injuries from mishandling your Guinea pig. It is essential to know how to pick up and hold your guinea pig. Start with slipping your hand under the belly of your guinea and start to lift them; use your other hand to support the back end. Keep a firm, gentle grip holding the guinea pig close to your chest, with their feet towards your body. Handling your Guinea pig this way will ensure they feel safe and secure. There will be less chance of accidentally dropping them if they get rambunctious.

Another benefit of knowing your guinea pig inside and out is choosing accessories that will encourage play and exploration. Since your pet is not as agile as other rodents, you will want to select floor level toys, like tunnels and playpens. Small teeter-totters, weave poles, and low bar jumps are fun for your guinea pig and provide exercise. Who needs a tail when your Guinea pig can find its way out of a complicated maze, recognize colors, shapes, and even distinguish voices?

How amazing is it that your guinea comes from a long line of ancestors that span millions of years?  This article not just answered the question “Do Guinea pigs have tails” it also confirmed something you already knew that guinea pigs are smart, adaptable, and hands down one of the best pets. Sure, they do not have a tail, but who needs a tail when you have seven tailbones.