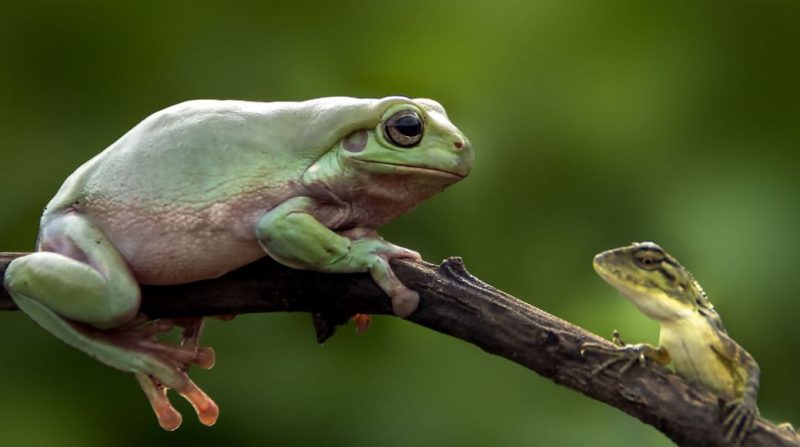 Creating a terrarium can be one of the most exciting parts of owning a pet frog or lizard, and you may be tempted to house both types of animals in the same tank.

Something to keep in mind is that frogs and lizards are capable of eating one another. It is pretty difficult for a frog and a lizard to coexist in the same environment, but it can be done if you are experienced with keeping amphibians, reptiles, or both.

Keep reading to learn more about frogs and lizards and what can happen when they live together!

Contents
Can Frogs and Lizards Live Together?
How Much Bigger Must the Frog Be to Eat a Lizard?
What Kind of Frogs Eat Lizards?
What Kind of Lizards Do Frogs Eat?
How Does a Frog Eat a Gecko?
Do Lizards Eat Frogs?

Can Frogs and Lizards Live Together?

The bottom line is that frogs and lizards can live together, but you need to be very careful about which species you attempt to put together. Overall, it is a good practice to familiarize yourself with caring for one of these species first.

If you don’t have any experience with keeping frogs or lizards, choose a species to start with. Research the species, create a suitable terrarium, and care for the species over a time period of at least a few months. After you find success caring for one of these species, then you can consider bringing a second species home.

To keep frogs and lizards together, you will need to find species that are behaviorally compatible. You will also need to ensure that the species is environmentally compatible as well.

It is also a good rule of thumb to add an additional 5-10 gallons of space to that total. If you do not provide enough space for each animal, their behavioral compatibility could significantly worsen.

Apart from space, the tank environment will have to be suitable for both species. This means that the temperature, humidity, lighting, and tank contents work for both the frog and the lizard in question. Some species will simply not be able to live together because of their different environmental needs.

Consider the natural environment of each species to rule out some incompatible options. If your frog species is endemic to a tropical region, but your lizard is endemic to a desert region, you can comfortably assume that their tank requirements will not be compatible.

Certain frog and lizard species will naturally fall into predator-prey dynamics, and these are the combinations that you will need to avoid. Size does play a large role in this but so do a few other factors.

When you have two species that are active at different times and are using different areas of the tank, you can minimize potential power struggles or other conflicts.

How Much Bigger Must the Frog Be to Eat a Lizard?

One of the main concerns with keeping a frog and a lizard together is that the frog will eat the lizard. To successfully eat a lizard, a frog would need to be able to fit the lizard in its mouth. This is not too difficult to achieve since frogs can significantly stretch their mouths.

Large frog species are known to eat prey that is the same size or even bigger. Even if a frog cannot fit the whole lizard, it may still make a handful of attempts.

However, keep in mind that a frog may not always be enticed to feed on a lizard every time it is offered. There may be a variety of reasons why your frog is not eating yet, but your job is to provide the right food at the right size.

What Kind of Frogs Eat Lizards?

Bullfrogs are predators that are known to eat just about anything they can fit in their mouths. These large amphibians will eat insects, worms, mice, fish, lizards, and even other frogs. A bullfrog is constantly on the hunt and is capable of eating lizards that are smaller, the same size, or even larger than itself.

Horned frogs like the Argentine Horned Frog are known for eating large prey as well. This does include lizards, so this species should not be placed in a terrarium with lizards.

Large toads are also typically incompatible with most lizards. Like bullfrogs and horned frogs, large toads are capable of catching and digesting bigger prey. If a toad chooses a meal that is too large, it may choke on that meal and spit it back out.

What Kind of Lizards Do Frogs Eat?

There are some types of lizards that are more likely to end up being a frog’s lunch.

There are a lot of species of geckos, and the small ones are especially susceptible to becoming a frog’s meal. Common Leopard Geckos grow to be around 6-10 inches in length and can make a good meal for a hungry frog. Crested Geckos grow up to 5-8 inches and can also fall victim to a frog. Even a frog that is the same size or smaller can be successful in catching and eating one of these lizards.

Other geckos like Tokay Geckos are less likely to be eaten by frogs because of their size and potential to be aggressive. Tokay Geckos can get as large as 12-16 inches long, which can be especially hard for a frog to handle.

How Does a Frog Eat a Gecko?

If a frog decides to eat a gecko, a few things will occur. First, the frog will identify its prey and wait to catch it with its sticky tongue. Frogs are considered ambush predators, which means that they will sit and wait for their prey before suddenly attacking.

Once the gecko is caught, the frog’s tongue will suck the unsuspecting gecko into the frog’s mouth. The frog may have to stretch its mouth to be able to accommodate the meal. If the gecko is too large for the frog, it may have a chance of escaping.

If the frog’s mouth can fit the gecko, it will be swallowed whole. Sometimes, you can see a tail or leg still hanging out of a frog’s mouth while it eats a larger meal. The frog will use its eyeballs to push the gecko down into its stomach. Once there, the enzymes and acids of the frog’s digestive system will take care of the rest.

Some lizards are capable of eating frogs as well. However, the lizard will need to be substantially larger than the frog if it is to be successful. Bearded dragons, chameleons, iguanas, and monitors are all types of lizards that have been known to eat frogs.

Even though a frog may not be these lizards’ first meal of choice, a captive environment may trigger a lizard to attack. This is especially true if your terrarium is too small or if the animals are stressed out.

Frogs aren’t all that safe for lizards to eat. A lot of frog species secrete harmful toxins through their skin that can sicken or poison their predators. If a lizard eats a frog, it can face serious consequences and may not survive the encounter either.

There are a lot of things that can go wrong if you decide to keep frogs and lizards together. Common issues revolve around environmental incompatibility and behavioral incompatibility. Depending on the species, violent and deadly interactions can occur.

Success can be found, however. This is especially true for individuals who have years of experience caring for frogs and lizards. Understanding these animals takes time, and they can be difficult to care for.

If you are truly interested in creating an environment for frogs and lizards to share, start with one species and truly work to understand the needs of the animal.

Do Frogs Have Emotions? 7 Mysteries Solved!

Why Is My Frog Not Moving?

Can Frogs Die From Stress?