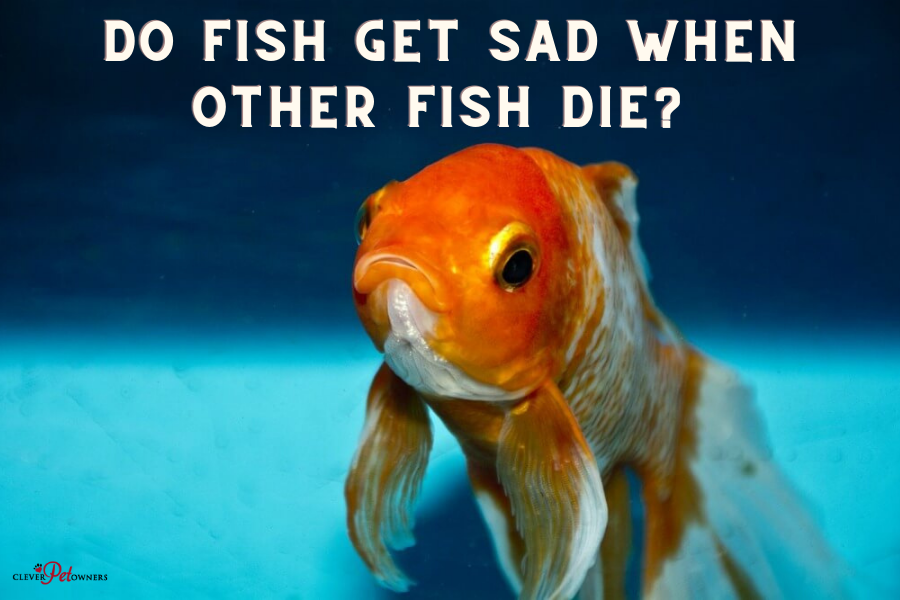 The occasional loss of a pet fish may be inevitable, but it is painful all the same. Even experienced aquarists feel a twinge of grief when a fish dies.

Do the surviving fish in the aquarium feel it as well?

Scientists believe so. It is impossible to know for sure what emotions our pets experience, but all evidence indicates that fish are capable of sadness.

Fish, particularly schooling species, can display signs of grief and depression when a tank mate dies.

As in humans, these emotions can have a profound effect on the mental and physical health of the fish.

Continue reading to learn how to recognize when a fish is sad, and what can be done to care for a grieving fish.

Contents
I) Three signs your fish is depressed when other fish die
II) How to care for a grieving fish
III) Which fish species are likely to grieve over the death of a tank mate?
IV) How do we know that fish have emotions?

Three signs your fish is depressed when other fish die

After the loss of a tank mate, a fish can develop depression. This may come as a surprise to people who view fish as mindless, simplistic creatures.

However, fish are capable of a wide range of emotions, including sadness. This manifests itself very similarly to human depression.

In fact, zebrafish are used in laboratories to study the effectiveness of new antidepressants!

Here are a few signs that your fish has developed depression.

Depressed fish often appear lethargic. Rather than chasing their tankmates or browsing for food, they float motionless near the floor of the tank.

Their bellies may actually rest on the tank substrate, and their breathing may appear to slow down. In extreme cases, lethargic fish may appear to be dead.

Always nudge a motionless fish with a clean hand or the edge of a net before removing it from the aquarium.

Like all living things, fish need their sleep. Be sure to observe your pet several times throughout the day to determine whether the behavior is healthy.

Is the fish always resting in the exact location? Does it remain motionless when other fish are active? Does it react to stimuli, such as a human walking into the room?

If the fish appears too lethargic to move, there may be cause for concern.

Lack of curiosity is another critical symptom of depression in fish. Healthy fish are naturally curious and enjoy exploring their surroundings.

Use an erasable marker to draw a line across the middle of the tank, then release your fish inside.

A healthy fish will zip all over the tank, moving rapidly from top to bottom and swimming along the surface of the water.

A depressed fish will swim towards the bottom and stay there. If the fish remains below the line for most of its time in the test tank, it may be experiencing depression.

Depressed fish may refuse to eat, ignoring even their favorite treats. Their color may begin to fade, possibly as a side effect of malnutrition.

Interesting READ  How Long Can Goldfish Live In A Bowl?

However, both of these symptoms indicate poor fish health in general and could be warning signs of another health issue, such as fungal disease or poor water quality.

Make sure to rule out other possibilities before diagnosing a fish with depression.

How to care for a grieving fish

As with human depression, a grieving fish may be especially susceptible to other health problems.

Monitor a grieving fish for signs of illness, such as discolored scales or labored breathing. Know the symptoms of common fish diseases such as ick, fungal infections, and fin rot.

If caught early, these illnesses can be easily treated with medicines available at aquarium stores.

To ensure that nothing else is wrong, regularly check the tank’s water parameters. Ensure that the pH is balanced and the nitrate and nitrite levels are at acceptable levels.

Checking the water parameters, and performing extra water changes if necessary, helps ensure that your fish remain healthy throughout the grieving process.

This can also help prevent further fish loss if an issue with water quality causes the death of the original fish.

Adding new enrichment items to the tank can help draw depressed fish out of their lethargy.

A new plant, hide, or puzzle toy adds variety to the environment, providing something different for the grieving fish to focus on.

New substrate or decorations can spruce up your tank while also providing interest for the inhabitants.

Even shifting around existing décor can pique a fish’s natural curiosity, encouraging it to swim and explore.

For a depressed fish refusing to eat, live food serves a dual purpose as both enrichment and nutrition.

Always research your pet before offering live food, as not all fish species can safely hunt all prey items.

Once a few weeks have passed, it may be time to replace the deceased tank mate. For a schooling fish, add new tank mates of the same species.

Introduce new fish one at a time, allowing for a few weeks’ adjustments between each addition to the tank.

Be sure not to overstock the tank, as this will cause further stress due to poor water quality.

Always consult a tank stocking guide before buying new fish, taking into account the adult size of the species in question.

For non-schooling fish, dither fish may be an alternative to fish of the same species. Dither fish are small, hardy fish added to a tank to provide enrichment to a larger fish.

This is especially valuable for long-lived species like cichlids, which may be unable to bond with strange cichlids after the death of a tank mate.

Which fish species are likely to grieve over the death of a tank mate?

Aside from bettas, most fish species commonly kept as pets are schooling fish.

Interesting READ  Why Are Betta Fish So Popular? (4 reasons!)

This includes tetras, guppies, and platys, which all need small groups of the same species to live comfortably.

By definition, schooling fish engage in schooling behavior. They swim together in a tight clump, twisting and turning as a single organism as they move about the tank.

Goldfish, another popular pet species, are considered gregarious fish. They don’t swim in a school, but they do become more active and energetic with at least one more goldfish in the tank.

Aquarists have observed that schooling fish often become listless after the death of a tank mate, especially a member of the same species. They will refuse to eat and may remain motionless for long periods of time.

Some fish owners even report that their bereaved schooling fish appear to be searching for the dead tank mate, swimming repeatedly around an area where the dead fish was often found.

This may occur in male and female breeding pairs or simply in fish who have lived together for many years and become accustomed to one another.

Oscars, cichlids, gobies, and various species of catfish have all been known to form pair bonds after years of living together.

Bonded fish are especially susceptible to grief and should be monitored for signs of depression after the death of a bonded partner.

In extreme cases, bonded fish have been known to starve to death after losing a tank mate.

This is especially devastating for aquarists, who in many cases have put years of effort into the care of these long-lived fish.

Having lost one fish, they are forced to watch the other decline and die in a matter of weeks.

How do we know that fish have emotions?

According to animal behaviorists, fish are often thought of as simple creatures, but there is more to our scaly friends than meets the eye.

Recent studies indicate that fish have stronger emotions and social bonds than we give them credit for.

One study found that fish in stressful situations experience “emotional fever.” Like mammals and other vertebrates, their body temperature rises a few degrees in response to stress.

This indicates that fish experience negative emotions in much the same way that we do, as physical as well as mental discomfort.

Another study suggested that fish are capable of forming friendships. Researchers intentionally caused fear in laboratory zebrafish by briefly removing them from their tanks.

The fish produced high levels of stress hormones when facing this ordeal alone or with strange fish.

When housed with fish they were familiar with, they produced lower levels of stress hormones and reacted much more calmly.

The fish in this study found comfort and security in their tank mates, which enabled them to endure the tests without panicking.

With a modern understanding of fish behavior and psychology, it’s not difficult to see how losing a familiar tank mate could affect a fish both physically and emotionally.