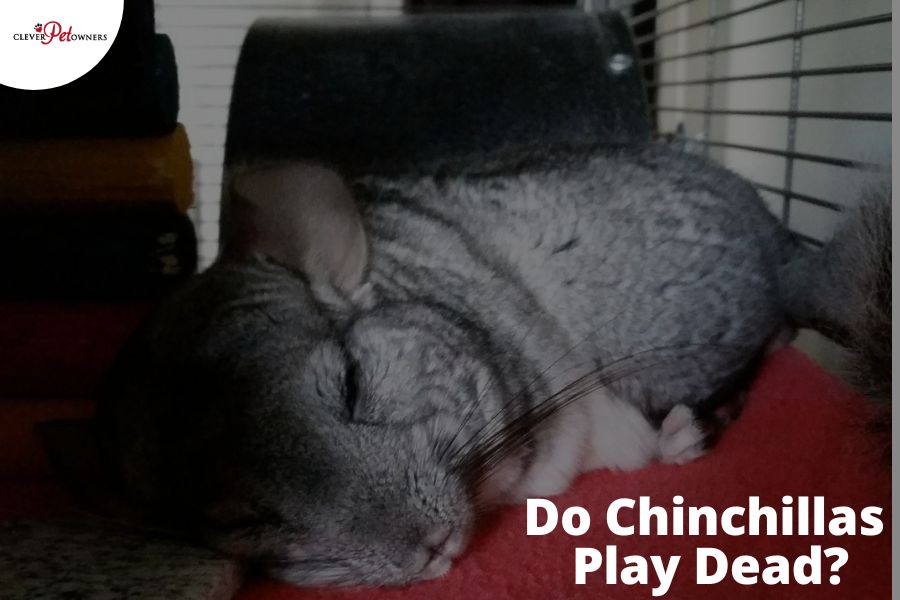 You’re likely used to your chinchilla bouncing off the walls and only staying still long enough to nap and eat. You let your chinchilla out of its cage and watch as it falls to its side, only to flop back up as if nothing had happened.

It looks as if your chinchilla is playing dead with you! This might be alarming initially, but it’s cute after you’ve realized they’re fine. This behavior could be a sign of a more significant issue.

Though chinchillas are not known to play dead, it is possible that your pet could have learned this behavior. But how do you know? This article will help you understand the differences between severe signs and cute tricks.

Why your chinchilla appears to play dead?

A seizure happens when electrical changes interrupt how the brain is normally supposed to work.

The brain has many parts that work together as one, and those electrical changes can make your chinchilla act differently than what you should be seeing.

Seizures may look a little different for every chinchilla. They might be severe and scary, or they may even look cute and on purpose.

It will be clear that something is wrong when your chinchilla falls suddenly and violently moves as if they have no control.

When their behavior is anything less, it may be hard to tell if something is wrong with their brain when a seizure can also be as quick as laying down slightly and getting back up.

Does your chinchilla make the same motion every time you feed them or do something they enjoy? If after assuring that your chinchilla is healthy, you may have helped create a behavior!

This could involve moving in a way that he thinks will warrant a treat, whether you meant to enforce this or not.

It is essential to know that learned behaviors should not look dramatic or worrying. Chinchillas are rodents and very intelligent, as we know, but they do not lie down like dogs or cats.

What to look out for when you think your chinchilla is playing dead?

Seizures can happen because of many different types of injuries. Some injuries, like missed head traumas, may be out of your control or have been there from the beginning, like birth defects.

Sometimes accidents can also cause medical conditions and result in secondary seizures or symptoms.

Of course, it is never our intention to harm our pets. It can be helpful to know what signs to look out for things we might not have realized we were doing or not doing.

There are many medical conditions to be wary of, but these five are very common and easily missed.

With 80 hairs per follicle, it is unlikely for them to get chilly just under their preferred temperatures, but because of that dense fur, it’s easy to overheat.

Assure that your chinchilla is in a cool room and has access to cool surfaces like tile squares if it is going to be warmer. Be sure to limit playtime out of their cage to no more than 30 minutes in the summer.

Interesting READ  How Much Playtime Do Chinchillas Need?

Injuries can be tricky as we often aren’t there to see them when they happen. Your chinchilla is at risk of injuring their head from falling or if they’re housed with an excitable cagemate.

To avoid falls, make sure your chinchilla has plenty of ledges. This will ensure that your pet doesn’t have to overestimate or underestimate how far to jump when they’re at the top of their cage.

Adding hammocks will break up open space. If your chinchilla falls, it will be able to land on a hammock to catch or ease its fall. Be sure to avoid hanging strings or loops.

If you have more than one chinchilla, be sure that they get along well. Rodents make families hierarchies, meaning one of your chinchillas will always be the one to get picked on.

Hierarchies are perfectly healthy. However, interactions can sometimes turn into aggressive fighting. In this case, it is better to separate your chinchillas to avoid significant harm.

Epilepsy is known as “seizure disorder”. Epilepsy is purely genetic and would be an instance of not knowing that your chinchilla was suffering until you notice their playing-dead behaviors.

Epilepsy may be triggered by speaking loudly to your chinchilla, your chinchilla getting excited by something (such as going up to its cage), or rough playing. There may not even be a trigger at all.

Your veterinarian will diagnose your chinchilla with epilepsy if they have two seizures with no cause.

There is no cure for epilepsy. But if diagnosed, your veterinarian will help your chinchilla have the best life possible.

Thiamine or vitamin B1 is equally important for chinchillas as it is for us. The body cannot make thiamine, which helps us have a healthy nervous system, so being thiamine deficient could be why your pet is having seizures.

Thiamine deficiency is usually caused by accidentally under-fulfilling a proper diet. Your chinchilla can immediately get healthy again once you restore sufficient thiamine.

Dark leafy greens, alfalfa, and oat bran are excellent sources of vitamin B1. Always ask your veterinarian’s opinion before feeding new things to your chinchilla.

Your veterinarian will likely give your chinchilla some vitamins if suspected of being deficient.

Your chinchilla could be prone to having low blood sugar. This can happen to anyone, but when it happens often, it’s called hypoglycemia and could be genetic.

Your chinchilla may faint from low blood sugar when you take them out of their cage due to excitement. Offer one raisin, which is high in sugar.

What should I do when chinchillas do that?

If you notice your chinchilla playing dead or having other issues, you should schedule an appointment with your veterinarian immediately!

Tell your veterinarian everything you have noticed about your chinchilla and its behaviors.

Even if what you noticed may not seem important to you, be sure to mention it anyways, as every bit of information helps.

Step 2: Determine the cause

Be specific with your veterinarian! Tell them exactly what your chinchilla does, when, and how they do it.

Interesting READ  How to Tell A Chinchilla’s Age?

Being very specific can help your veterinarian test and diagnose what is wrong with your pet and how you should go about treating them.

Write it down if your chinchilla:

These are all very helpful for your veterinarian to determine what kind of seizures your pet may be suffering from.

A change in lifestyle may include things such as:

Step 4: Write down any significant events

After you have diagnosed the reason for your chinchilla’s behaviors, keeping track of your pet’s health is still important.

Seizures do not stick to one pattern. Even if your chinchilla is medicated or you have changed its lifestyle based on your own thoughts or your veterinarian’s, it is still essential to know when seizures happen.

Writing down when seizures happen can help your veterinarian know if they should adjust how they treat your pet.

Can you train your chinchilla to play dead?

Yes! But it, unfortunately, will not be as dramatic as you might hope. Chinchillas don’t have bones or muscles like dogs and cats, so they will not sit or lay down in similar ways.

Purposely teaching your chinchilla to play dead might not look as extreme as a seizure behavior, but it’ll be safe.

Chinchillas do not learn commands like us. Instead of understanding what a word means, they learn things by association and reward. And food is anyone’s biggest motivator!

While you offer your chinchilla its favorite treat, hold your pet and gently motion them in your hands so that their back is in your palms. Do not force them to stay that way if they resist.

You want to associate that motion with their treat, so they see it as a good thing.

Chinchillas learn by repetition and patience. Keep doing this motion until you have them playing dead in your palms!

Chinchillas are prey animals that rely on their speed and fur that easily shed to get away from predators. They do not play dead instinctually or as a form of play.

It can be scary to see your pet do something new that isn’t usual to their behavior. It’s important to never panic and pay attention to your chinchilla whenever they do something you’re uncertain of.

If your chinchilla has been playing dead and you suspect a seizure, do not touch or try to comfort your pet.

Wait for their seizure to be over, and write down what you saw, the duration of the seizure, and what time it happened.

The more information you give to your veterinarian, the easier it will be for them to help you get your chinchilla back to its old self.

How to Tell A Chinchilla’s Age?

How Do I Know If My Chinchilla Is In Heat?