Most cats are separated from their birth mother as a kitten. When I look down at my beautiful furbaby, it gets me thinking, does my cat remember his birth mother? Does he miss her?

Unfortunately, most cats do not remember their mother.

Although cats may be familiar with the scent of their mother, they won’t be able to make the connection between the familiar scent and their mother.

Do cats remember their mother?

As strange as it seems to us humans, cats do not remember their mother. In fact, when a kitten is separated from its mother, it tends to forget her rather quickly.

If a cat were to reunite with its mother, it wouldn’t recognize her face. Cats don’t remember others by vision; instead, they remember them by scents.

They are simply drawn to the smell

When they are young, cats exchange scents with their mother and siblings. So the scent of a cat’s mother may be familiar to them.

However, the scent alone will not make a cat realize that it is actually meeting its mother.

You might see videos online that show a grown cat meeting its mother years after separation, and those videos tend to show cats seemingly overjoyed over the reunion.

This is likely due to the cat being familiar with the mother’s scent and not necessarily because they know that the cat they are meeting is their mom.

Scents can be misleading too

Just because a cat is familiar with its mother’s scent doesn’t mean it will take to her. There are instances when cats don’t even get along with their mothers.

With new environments that a cat is met with growing up, they pick up many different scents. The likelihood that they will remember the scent of their mother that they have only smelt as a kitten is very slim.

If you think about it, it would be hard for anyone to remember their mother if they only knew them as a baby. It’s kind of the same thing!

Do mother cats remember their kittens? 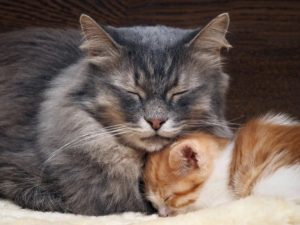 On the flip side, what about the mother cat? Does the mother remember her kittens when they are all grown up?

This is a valid question since a mother cat is an adult, so it leaves one to assume that she will remember all she did for her kittens.

Well, I’m afraid the answer is going to disappoint you.

A mother’s bond with their child is strong, filled with love and affection. Cat mothers are no different. They spend lots of time caring for their litter by grooming, feeding, and teaching them how to survive!

It seems hard to think that a mother cat that has done that much for her kittens will forget them.

Even so, mother cats also face the same reality as their kittens. They don’t remember their kittens when they are grown up!

Since cats rely on scents to remember each other, mothers will forget their kittens shortly after being separated. Once a kitten leaves and is no longer with its mother, it picks up new scents.

The new scents make it difficult for a mother cat to remember her kitten. It is then hard for her to identify him or her if they were to cross paths.

How much do cats remember?

If a cat doesn’t remember its own mother, what does it remember? Surprisingly, cats actually have a great memory.

They also are great at remembering when that food will be available. Have you ever noticed that your cat is already on the mat, waiting when you are about to feed it?

That’s because they remember when it’s grub time!

Cats can also remember things that have happened to them in the past. In cases of abuse and negligence, cats tend to remember or even bear grudges. This is why you might see a cat that was abused be afraid of people that are similar to their abuser.

For example, if a cat is abused by a man, it might not trust other men easily in the future.

Memories that have made an impact on a cat’s life can undoubtedly be recalled by a cat. These occurrences could be good or bad, but they leave a lasting impression on a feline!

Cats can remember people that treat them well and feed them. If you have a member in your household that normally gives your cats treats, they remember this!

Unfortunately, a cat’s mother just isn’t an easy thing for them to remember. To put it this way, you likely don’t remember everything that happened when you were younger.

However, you are more likely to remember something traumatic that happened even if you were really young. The same thing goes for kitties!

Does my cat think I am her mother?

If cats don’t remember their birth mother, it seems fitting to wonder whether or not cats believe that we are their mother.

Cats don’t actually think we are their birth mother. However, they typically treat their owners similar to how they would to their mothers.

A cat owner will feed, play, groom, and nurture their cat. This gives cats the understanding that their owner is their caregiver. 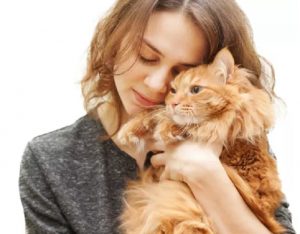 Cats will then show affection towards their owner in a way similar to how they showed their mother.

Cats show their love in different ways. Affection can be shown by rubbing against us, head butts, and even kneading.

You will often find cats cuddling next to their owner and kneading. Kneading is a practice that kittens do when being breastfed.

When cats knead, they are reminded of the comfort they had during nursing.

Because of all the care and affection from the cat owners, cats associate all that affection with a mother and naturally imprint it on us.

What is initial separation like between a kitten and its mother?

Even though cats don’t remember their mother, they shared a very close bond with their mother as kittens. When young kittens are adopted, it is a big adjustment for them to be away from their mother and previous environment.

If kittens are separated from their mother too soon, this can cause many problems.

Kittens that are taken too early are likely to get sick because they weren’t able to get nutrients from their mothers’ milk. They may also have difficulty adjusting to their new home, which can cause behavioral problems.

However, even when kittens are separated at an acceptable age, it may still be difficult for the mother and the kitten.

It’s common for newly adopted kittens to go through separation anxiety. It’s crucial that dealing with a kitten going through this with tact will allow him or her to adjust to this new lifestyle change.

The same goes for the mother cat. While she might not remember her kittens a few weeks later, it can be hard for some cats initially after the separation.

After adjusting, cats will be able to get over that sadness and bond with their owner.

They use their sense of smell to determine if they remember another animal’s scent. It could be that your cat is familiar with its mother’s scent.

This doesn’t mean that a cat will remember their mom. It only means that the scent is something familiar to them, and they won’t be able to make the connection between that scent and their mother.

Other than that, cats actually have a good memory. They can remember certain things in their life if they leave a big impression on them.

While cats don’t remember their mothers, they tend to view their owners as their moms. They treat owners similar to the way they treat their birth mother.

Even though cats don’t remember their mother, it doesn’t mean they don’t feel upset when they are first separated. Cats aren’t emotionless; they are just different from humans, which is probably why we like them so much! 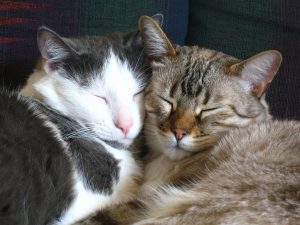