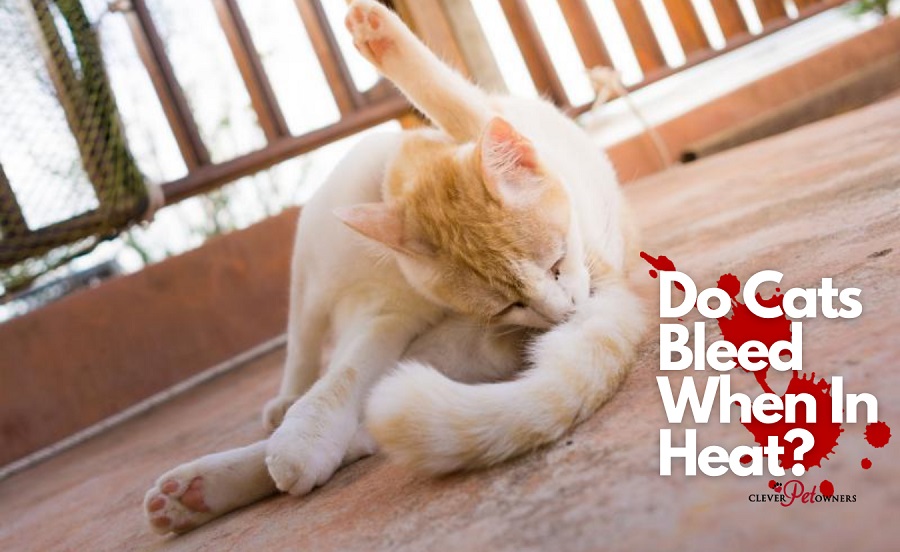 The heat cycle can be problematic, especially for cat owners who start noticing strange behavioral patterns for the first time, leading them to panic because they don’t know what best to do.

Whether you’re already a cat owner, or thinking about bringing a kittie home and want to educate yourself on what to expect, this is the article for you.

We will tell you whether or not cats bleed when in heat, what happens during that period, and how best to deal with it to make it easier for your cat and you.

Do cats bleed when in heat?

No, female cats don’t usually bleed during their heat cycle.

Unlike female dogs, it’s not that common for female cats to bleed when in heat as they do not shed the lining of their uterus, which is the main cause of bloody discharge in female dogs.

Instead, they re-absorb the old uterine lining. So, there is no reason that would cause vaginal bleeding. Therefore, the main manifestation of a cat in heat is a sudden and remarkable change in behavior.

However, although it’s not common, it can still happen. Cats may bleed, but it would only be light and a thin ooze, and, in this case, it’s not worrisome.

You’ll see bloody spots on the floor or her bed. If you notice something unusual, you should head to the veterinarian immediately.

On the other end of the spectrum, bleeding during the heat cycle can be dangerous if it is constant, intense, and aggressive. Most of the time, it is not even related to the heat cycle but may rather be a result of an infection.

Although it’s not that common, cats may also experience physical trauma after fighting with other cats or falling, which may cause them to bleed.

Why do some cats bleed when in heat?

Some cats do actually bleed when in heat, as the heat cycle may trigger some internal health issues from which your cat may be suffering.

Below are the possible reasons behind your cat bleeding:

Cysts can form within different tissues of the body, taking the shape of pockets and containing liquid or solid substances.

These substances can either be natural bodily discharge, such as sebum, or unnatural, such as dead cells and keratin.

When touched, cysts look like bumps and feel like circular pimples underneath the skin and are white or bluish.

Cysts can be either benign or fatal, but either way, they need treatment. If your cat has ovarian or follicular cysts, you’ll notice she’s releasing brownish or grayish-white discharges.

As your cat tends to excessively groom herself when in heat, she may have touched the infected area, leading to bleeding.

If your cat is bleeding during heat, she may also be suffering from uterine tract issues.

Also known as Pyometra, it is a bacterial infection affecting the cat’s uterus. This may usually happen after a cat has been in heat and is still sexually intact.

Interesting READ  Is It Normal To Feel Your Cat's Spine When Petting Him?

In fact, when in heat, the cat’s uterine lining gets thicker and thicker as it prepares for pregnancy. If the cat doesn’t get pregnant, the lining is usually re-absorbed.

However, sometimes, the lining thickens until it develops into an unnatural cyst, which renders cats vulnerable to bacteria, hence the uterus infection.

There are two types of Pyometra: open and closed. If your cat bleeds or releases any vaginal discharge, it means that she has open Pyometra.

Pyometra is generally treated by surgery to remove the uterus and the ovaries.

The urinary tract is sensitive to heat, and it is challenging to maintain a balanced body temperature. Bloody urine is technically a fever in the bladder.

When a cat is in heat, her body temperature is already higher than usual.

Bacteria thrive in a hot environment, along with the fact that feline urine gets more irritating to the lining of the bladder, hence urinary tract infection and bleeding.

Vaginitis is a vaginal infection generally resulting from blood collection in the vaginal area.

Symptoms of vaginitis include excessive grooming or licking due to the irritation the inflection causes, rubbing the vaginal area on surfaces or objects, and red vagina.

When a cat is in heat, the uterus opens for the sperm to enter. When it does so, the blood collected in your cat’s vaginal area finds a space to discharge, which may cause bleeding.

It’s not common for cats to experience sudden miscarriages. That said, it can be the case if your cat is bleeding when in heat.

A cat’s uterus cannot eliminate all of the pregnancy’s residuals alone, and your cat needs professional intervention.

However, if you didn’t know your cat was pregnant and that she had miscarried her kitten, the remaining, such as placental tissue, would accumulate and cause infection, the manifestation of which is bleeding.

If your cat suffers from one of these issues, she will be in pain, and you’ll have to treat her at the veterinarian. Don’t self-medicate your cat!

What should I do when that happens?

There are various things you can do to deal with your bleeding cat in heat, including:

If your cat is in heat and bleeding, the safest and first thing to do is consult your cat’s veterinarian, even if the bleeding is not alarming.

Choosing to treat your cat yourself without knowing the real reason behind her bleeding may even exacerbate her condition.

Only the vet would be able to tell you whether she’s suffering from serious health issues or not.

Your veterinarian will probably prescribe either antibiotics or antiseptics (or both) after blood and urine tests. If your cat’s condition is severe, your veterinarian may even opt to remove the ovaries and uterus.

Consuming enough water would not only help with regulating your cat’s body temperature but also help her to get rid of any lingering bacteria. To increase your cat’s water intake:

Interesting READ  How Long Can A Cat Survive Locked In A Shed?

Remember that water is a beneficial way to expel bacteria from your cat’s body, stopping the bleeding.

Keep your cat away from male cats

If your cat is in heat and bleeding, she’s already suffering from a health condition. Many cats attract bacteria as they mate with male cats.

To prevent your cat from catching another bacteria that may worsen her physical health, keep her away from male cats.

At the same time, this will also help with soothing your cat in heat. She may be calmer if she remains indoors without access to the outside world and without seeing or hearing a male cat.

How else to tell if a cat is in heat?

The most telling sign of a cat in heat is behavioral change.

Your female cat will become more affectionate, demanding, and attention-seeking during her heat cycle, even if she is not usually the demanding and extra affectionate type.

A cat in heat will continuously roll on the floor and soft surfaces like the sofa, frequently groom her private parts and constantly rub against you, your furniture, random objects, walls, and even your visitors so that she attracts your attention.

Your cat will urinate more than usual and everywhere in the house, even on your furniture.

This is because she needs to discharge hormones, as the urine has both pheromones and hormones. This way, she marks her territory, but it also serves as a call for male cats to signal that she’s ready to mate.

You will also notice that she would try to escape home and go outdoors, as male cats start to come near your apartment in response to her yowling and would get restless when you try to prevent her from doing so.

Last but not least, you will notice that your cherished calm and patient cat is now unable to wait and may even get destructive to get what she wants.

This is why she would become louder to make her needs heard and met.

Want to escape the struggle and keep your cat healthy?

If you don’t want your cat to breed and would rather not struggle with your cat in heat, you can simply get her spayed before she enters her first estrous cycle.

It would keep her immune to many diseases, especially sexually transmitted ones. In other words, your cat will live longer and healthier!

Female cats in heat don’t usually discharge vaginal blood. If it occurs, it would only be in the form of a light and thin ooze.

Remember, the first thing to do as soon as she starts bleeding is to take her to the veterinarian!

Is It Illegal For A Cat To Poop On Someone’s Lawn In The United States?

Why Do Cats Scream When They Mate?

Bonding Cats – 8 Things You Should Know!

What Does It Mean When A Cat Lets You Touch Its Paws? (4 reasons!)

Why Do Cats’ Eyes Change Color? (Not what you think!)