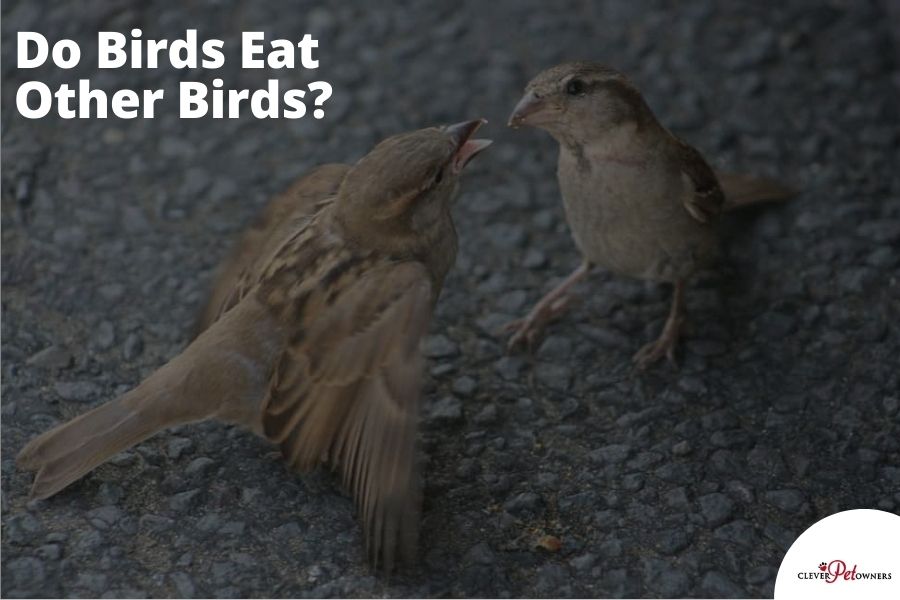 The short answer is yes; some birds do eat other birds. This behavior is known as cannibalism and is mainly seen in species experiencing food shortages.

Large birds of prey are the most likely to engage in cannibalism as they have sharp talons and beaks that allow them to quickly kill and dismember their prey.

This article will discuss some of the commonly known birds of prey, and some useful tips on keeping them as pets.

What kind of birds eat other birds

There is a misconception that owls are only predators of small animals like rodents and rabbits.

What many people don’t know is that owls also eat other birds.

This can be a problem for bird populations, as owl predation can significantly reduce their numbers. However, there are a few reasons why owls eat other birds.

Despite the negative impact on bird populations, not much can be done to prevent owls from eating other birds.

The best strategy may be to ensure an adequate supply of alternative prey for owls, such as rodents and rabbits.

Eagles have few natural predators. This allows them to hunt a variety of prey, including other birds.

While eagles can kill prey much larger than themselves, they often go for smaller birds since they are easier to catch and consume.

One of the most common victims of an eagle’s hunting habits is the vulture. Vultures are relatively slow and cumbersome birds, and eagles will push vultures away from their meal which can lead to the vulture becoming the eagle’s next meal.

Eagles have also been observed hunting big birds like crows and ravens.

While it may seem like the eagle has the advantage in any hunting situation, there are a few ways that other birds try to protect themselves from being eaten.

One is they travel in packs, which makes it harder for an eagle to single out one bird for an attack.

Another is avoiding open areas where eagles can spot them more easily. Finally, if all else fails, some birds will try to scare the eagle away by making loud noises or attacking it themselves.

Hawks are among the most respected predators in the animal world. They are known to eat other birds, including their young. This can devastate bird populations, as hawks can quickly decimate a flock.

Hawks have some very effective hunting techniques. They often perch on a high spot and watch for prey to come nearby.

When they spot a target, they swoop down quickly and snatch it up in their talons.

Hawks are a formidable foe for other birds in the area. Hawks rarely miss their target; when they do, it is usually because the prey has managed to get away.

Why do birds eat other birds?

They are birds of prey

Birds are omnivorous animals, which means they eat a variety of things. Their diet includes seeds, fruits, insects, and other small animals.

Some birds may also consume amphibians, reptiles, or even other birds. A bird’s diet is determined by its species and habitat.

One reason is that they may be hungry and need to find food quickly. Birds that are predators will often eat other birds because they are an easy source of food.

There is something truly captivating about birds of prey. These awe-inspiring animals command our attention and inspire our curiosity.

They’re renowned for their powerful claws and beaks, which they use to capture and eat other birds.

Many people wonder why these predators eat other birds when they could easily hunt other animals, such as rabbits or mice.

Birds of prey are also very efficient hunters. Their keen eyesight allows them to see prey from far away and capture it before it has a chance to flee and eat it.

Their existence is essential to any ecosystem since the natural order would be disturbed without them, and the delicate web of life would come undone.

Carrion-eating birds are aptly named as they feed on the carcasses of dead animals. This might seem like a gruesome diet, but eating carrion has several benefits.

For one, carrion is an excellent source of protein and nutrients. It’s also a relatively easy way for these birds to find food, as they can simply scavenge for dead animals on the ground.

This leads to the most important benefit of eating carrion: it helps keep the environment clean.

Cannibalism, or eating other members of one’s species, can be a brutal way to survive. Still, it can also be beneficial for bird populations.

When one bird eats another bird, it frees up resources such as food and territory that can be used by other members of the flock or population.

This helps to ensure that the population remains healthy and robust. For example, cannibalism can help to prevent starvation if there is a food shortage.

Additionally, cannibalism can help to keep populations in balance. When too many birds are living in a particular area, there may not be enough food or space for all of them.

In these cases, some birds will die off naturally, and others will be eaten by their fellow birds.

This helps to keep the population size in check. While cannibalism may seem like a harsh way to survive, it can be helpful for bird populations as a whole.

Can you keep birds of prey as pets?

Many people wonder if they can keep birds of prey as pets. The answer is yes, but it’s not as easy as buying a bird from a pet store.

Interesting READ  Why Is My Bird’s Poop Watery?

These beautiful creatures make excellent companions if you’re up for the challenge.

First, you must acquire the proper permits to keep a bird of prey in your area. Depending on your zoning and state laws, you might be able to keep other birds of prey, such as owls, eagles, and hawks, as pets.

Second, you need to provide a suitable home for your bird. Birds of prey need plenty of space to fly, so large cages are a must. They also need perches and toys to keep them entertained.

Third, you will need a good space to train and keep your bird happy as they are prey motivated. As they build their relationship with you, take your bird to new areas to practice hunting.

Finally, you need to be aware that birds of prey can be dangerous. They may not attack humans but can injure or kill other animals. Keep any other pets you have away from the bird’s cage.

Birds of prey, also known as raptors, are some of the most fascinating creatures in the animal kingdom.

These birds have long, sharp talons and beaks that are ideal for tearing flesh and can fly considerable distances.

Is it ethical to feed a bird to your pet bird?

If you choose to feed a bird to your pet bird, there are a few things you need to keep in mind:

Some people may feel that it is wrong to feed a live bird to their pet bird because they believe that the bird is being killed for no reason.

Others may think that it is okay to do this because they believe that the pet bird will benefit from the experience of hunting and killing its own prey.

Either way, it is up to the individual to decide based on their beliefs.

Whether or not you believe it is ethical to feed a bird to your pet bird, the decision is ultimately up to you.

So, why do birds eat other birds? The answer is simple – they need to eat.

Birds of prey are at the top of the food chain, and their diet consists of small mammals, reptiles, amphibians, and insects.

As for wild bird food and pet bird food, it’s crucial to provide a balanced diet that meets your bird’s nutritional needs.

Regarding ethics, we believe it’s up to each individual to decide whether or not they want to feed their pet bird live prey.

Can You Keep A Bird In Your Bedroom?

Should I Get A Second Budgie?

Why Is My Bird’s Poop Watery?

Can Parakeets And Cockatiels Live Together?