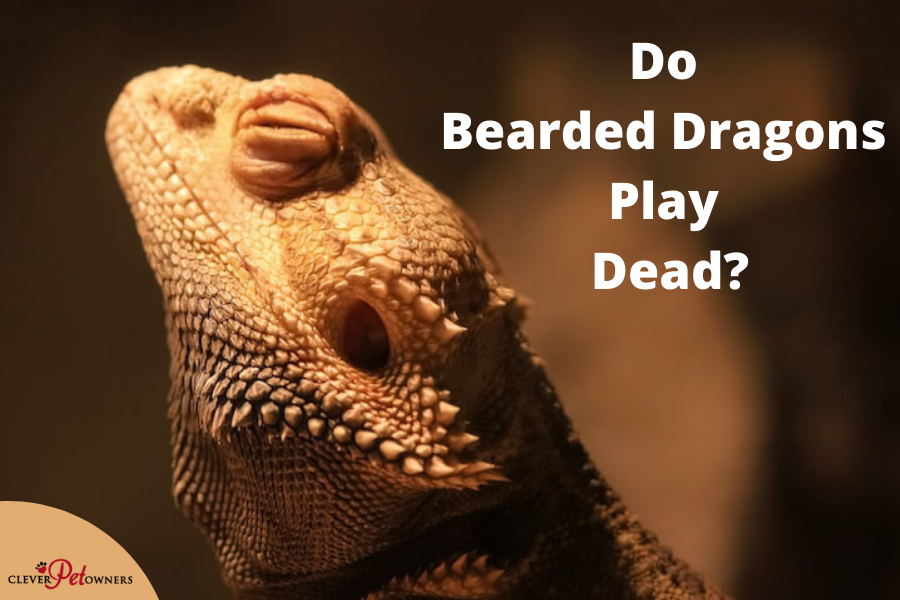 Some bearded dragons play dead when they’re feeling threatened, though it’s not always easy to recognize whether they’re actually dead or not.

Bearded dragons can hold their breath for extensively long periods of time. Therefore, it can often be challenging to spot if a bearded dragon is faking when playing dead.

Bearded dragons will play and or appear dead in different circumstances. Read on for the differences between a deceased dragon and a dragon that may be trying to fool you into thinking they are.

Is my bearded dragon playing dead or really dead?

Common signs of a deceased bearded dragon are:

Their bodies would be cold (more than usual) and stiff.

Your bearded dragon’s skin should normally be soft and a little squishy under their bellies. In addition, they may have gone into the very corner of the cage, away from the heat out of instinct.

This sign is often associated with other symptoms, such as being bloated or frail.

Different phases of a bearded dragon’s life can lead to slight color changes in the pet.

An example would include shedding, where their skin will look duller and grayer, whereas a deceased bearded dragon will be dark and colorless.

In addition, some bearded dragons will be black on their neck and belly. This could potentially have been caused by stress before they passed.

This is a sign of dehydration and a lack of nutrients. While bearded dragons can look this way while alive, these physical changes will be more apparent if they’ve passed away.

There’s also the possibility that your dragon’s mouth and eyes will be slightly open. If you try giving them food and water and they’re unresponsive, they may have passed away.

Depending on the cause of death, a bearded dragon’s body can become swollen when they’ve died.

As mentioned before, their bellies should be soft and a little squishy. If they’re swollen like a balloon, this is a cause for concern.

Sometimes a death like this can happen with no noticeable prior symptoms before death.

An autopsy could give you some closure and potentially prevent any future deaths with a bearded dragon if there was an underlying issue.

If you can see the outline of your dragon’s bones and a lack of elasticity in your dragon’s skin, this is another sign of a deceased dragon, but this alone is not a confirmation of death.

You shouldn’t be able to see nor feel your bearded dragon’s bones. If you do find that they are, in fact, not dead, contact a vet and see what you can do to bring them back to health.

Liquids coming from their mouths, nose, or ears is another cause for concern. This can be a sign of fluids draining from their bodies and/or an untreated illness.

Interesting READ  What To Do With Infertile Bearded Dragon Eggs

This can accompany other signs of death, such as a swollen or unnaturally thin body.

Before brumation, they will often avoid eating, act lazy and lethargic, and can even appear dead when they lay unmoving for extensive periods of time.

They’ll usually find a good hiding spot and be unresponsive.

They will also go through a long period of time without eating and will require you to keep an eye on them to make sure they’re still healthy.

Many (but not all) bearded dragons go through a period during the colder months of the year where they’ll go into a deep sleep. The length of time for bearded dragons varies.

Many (but again, not all) female bearded dragons will become gravid at least once in their lives.

They will present an odd set of behaviors when they become gravid such as lethargy, digging, lack of appetite, and a swollen belly.

They may look sick or dead when going through these stages, but keeping an eye on them and talking to a vet can help you understand your dragon’s behavior better.

Talk to your vet if your bearded dragon’s health doesn’t improve soon after being gravid.

When a bearded dragon is sick, it’ll usually show other signs, along with potentially appearing dead.

Some of these signs include:

Sometimes bearded dragons act dead just because they want to. You may feel like your dragon is playing a mean trick on you, or maybe he’s just a really deep sleeper.

They can be great actors and deceitful. Your dragon may actually look dead and unmoving, but they may actually just be putting on a good show.

When sleeping, sometimes bearded dragons will lay buried in the bedding at the bottom of the tank and unmoving for several hours.

This can be unsettling when this is an unusual behavior for them.

Generally, a sleeping dragon will stir one in a while and move around to warm up or cool down. If they haven’t left their spot since the previous day, you should check for signs of death.

How to confirm that your bearded dragon is not dead?

When you’re feeling uncertain, the best thing you can do is to gently pick them up and place them on their back.

Their natural instincts will kick in, and they’ll immediately panic if they’re alive.

It’s also important to only lay them on their back for a second or two as they will be unable to breathe.

Interesting READ  What Should I Feed My Baby Bearded Dragon?

Contact your vet if you’re still feeling unsure, as it’s always better to be safe than sorry.

If they do turn over, try interacting with them for a while and observe their behavior. Watch how they interact with you, their food, and other normal activities.

You’ll want to see if there are any accompanying signs of an illness.

A bearded dragon prior to brumation will become lazy and lethargic within the previous week.

They will continue to appear healthy and normal as they enter this phase, whereas a dead bearded dragon will be stiff and lose its color.

Your bearded dragon could still potentially have problems during the brumation period.

While it is recommended to leave them alone during this time, check in on them every day or two to check on their appearance.

If they start to look sick and/or they noticeably lose weight, consult with a vet.

Should I wake up my bearded dragon if it’s brumating?

If you’re sure that your dragon is brumating (you’ve spoken to a vet and have confirmed that they are, in fact, brumating), avoid interacting with them.

This is a natural part of their lives; therefore, trying to feed and interact with them can make them sick and potentially extend the brumation period.

The reason you shouldn’t try to feed them during (and before) brumation is that they won’t defecate, and the feces will sit in their stomachs and make them sick.

What you should do if your bearded dragon is playing dead

Don’t try to force-feed your dragon or immediately freak out and quickly pick them up. Try to stay calm and try the above recommendations first.

Do try and find the root cause of the problem and go from there.

If there appears to be nothing wrong and they were simply playing a trick on you, just keep an eye on their behavior and see if this behavior occurs again.

A vet visit is the best way to handle an unknown and/or scary situation.

They can help determine the potential problem and solution and save you the time and stress it can take to try and figure it out on your own.

Bearded dragons will often play dead when feeling threatened by a predator. This behavior is more common in the wild but can still happen when domesticated.

A stressful environment such as a new home or new people can trigger a bearded dragon to feel the need to protect itself by playing dead.

On the other hand, bearded dragons may play dead just because they want to. They can also go through natural phases in their lives that can make them appear dead.

They can be very convincing and hold their breath for an extensive amount of time.

They also know how to fool their owners and act like they’ve just come back from the dead as if nothing happened.

What Are Bearded Dragons’ Predators?

Can Bearded Dragons Use Eco Earth

Can You Use A Fish Tank For A Bearded Dragon