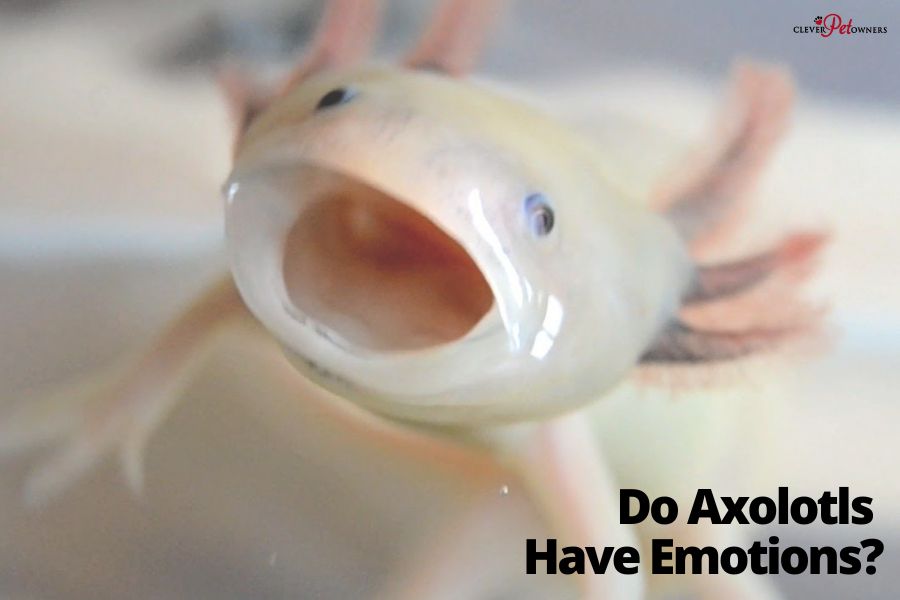 Their occasional goofy smiles and sometimes odd behaviors may make it seem like your axolotl is either happy or depressed. However, there is very little evidence or studies proving axolotls have emotions or feelings, and it is currently not well known.

To put this into perspective, axolotls are far from having a similar range of emotions when compared to humans. How they might be feeling is more often based on instincts or their physical health.

However, there is some proof that they do experience basic emotions, such as the capacity for facial expressions.

To conclude whether or not axolotls are capable of feeling or experiencing certain emotions, we will be examining the four most frequently mentioned emotions in this article.

Emotion #1: Do axolotls get lonely?

Although you might be concerned about your axolotl not having friends or just feeling that you don’t spend enough time with them, I promise there is no reason to be.

Axolotls are not known to experience loneliness, and since they are solitary creatures, it is frequently accepted practice to keep them alone.

Therefore, there is no need to worry. They won’t have any trouble surviving without you, another axolotl, or any other fish.

As long as you are there to provide your pet axolotl every day with proper care and attention, they will be well and never feel lonely.

Although housing numerous axolotls or with other species together can seem like an easy or even adorable idea, this will not be the case because you will likely have to choose between the health of the fish or the axolotl.

This is because an axolotl will eat anything that fits in its mouth, and many fish species have quite a few different needs than axolotls.

These animals are solitary by nature and, quite honestly, prefer to be alone. After all, these guys barely spend time with other axolotls unless it comes to mating or raising young.

Axolotls are not often renowned for being huge social butterflies. Even if some axolotls are maintained together effectively, this depends on the individual axolotls’ age, sex, and size.

They may appear pleased to see you since they have formed a favorable association between you and food. However, they really don’t care about the other fish in their aquarium.

Axolotls are usually well known for being hostile toward any fish or animal you could try to house them with, and males are known to turn violent toward other males.

Leaving them alone is usually the best option because it will be the most relaxing for your pet by reducing potential stress.

Additionally, it will prevent potential aggression problems, which could possibly result in deaths.

Your new pet axolotl may exhibit peculiar habits when it initially arrives, such as swimming wildly or refusing to eat.

It is not unreasonable to imagine that on their first day at home, they are feeling some combination of fear and bewilderment with you.

Axolotls don’t have a reputation for being afraid of anything, so it’s doubtful that this is the case. Even when they are afraid of something, they rarely feel fear at all.

In reality, they’re probably under some form of stress from everything new happening on their first day home. For instance, once they’ve arrived, it may take them a few weeks to unwind.

Extreme signs of stress and other indicators could be signs of fear in your pet axolotl such as:

If you notice any of these signs, consider taking steps to ensure that they feel safer in their environment.

If symptoms persist, consider seeing a vet to determine if there are underlying causes.

What can cause fear to axolotls?

They often experience excessive stress as the source of their sense of fear, which makes them somewhat more frightened or apprehensive in general.

There could be several potential explanations for this, including improper water parameter values, which often result in observable strange or unexpected behaviors.

Negative interactions with other axolotls, animals, or humans can also cause them to become avoidant and fearful.

It’s also possible for any loud noises or sudden, unexpected occurrences to startle your axolotl.

How to keep them feeling safe

To ensure that your pet axolotl feels safe, make every effort to avoid handling them.

Overhandling might hurt your axolotl’s health, disrupt your relationship with them, and make them fear you, in addition to just being bad for them.

It could be really stressful for them to even have you chasing them around the tank with a net.

To prevent aggression concerns, it’s also a good idea to keep them separate from other axolotls or animals.

To help them feel more at ease, think about making sure the water current is quiet and that there is either no light present or at least very dim lighting. If necessary, consider using a sponge filter to slow the water’s current.

Last but not least, it’s crucial to avoid placing your pet axolotl in uncomfortable situations because, similar to touching them, doing so might damage your bond with them and make them scared.

Since there is no information or study on the subject, it is theoretically uncertain if they are capable of having true sadness or depression.

The common misconception that axolotls are known to grow depressed or frustrated when left alone for extended periods of time is wholly untrue.

However, because of this misconception, many individuals now believe their axolotl are just experiencing sadness, which is improbable.

Their emotions aren’t as complicated, and they often only feel unhappy—or, perhaps more accurately, irritable—when they are unwell or in poor health.

Even if they’re moving slowly and seem bored, almost gloomy, it is often an indication of possible illness.

It’s crucial to ensure you aren’t simply observing axolotls during their sluggish periods because they are also nocturnal and frequently lazier during the day.

They are also known to become less energetic as they age, which may be crucial to excluding potential problems.

Whether or not they feel it, the most important thing is to ensure they are happy.

After all, a healthy axolotl is a happy one, and an unhealthy diet or an improper environment can definitely impact and make your axolotls uncomfortable or unhappy in some form.

It’s important to rule out the possibility of illness when your axolotl shows signs you might compare to being sad or depressed as it often is due to an underlying cause. The signs to look for could be:

If you notice any of these other signs, consider going to a vet to determine the true cause of their behavior and diagnose the possible illness they could have.

Interesting READ  How To Help a Stressed Axolotl

It’s important to always be safe than sorry when it comes to your pet axolotl.

Since axolotls are not known to experience direct happiness, they might not feel that way.

They are generally not very intelligent, though, and as a result, they don’t require much to experience joy or disdain.

Simpler things, like their physical health, are what they base their happiness on.

The surroundings and treatment they get as a result have a significant influence on their mental health.

When taking care of your pet, it’s crucial to remember that a healthy axolotl is one that is happy.

How to know if they’re happy?

Despite what it may appear like, just because your axolotl is smiling doesn’t necessarily imply they’re happy.

Even if we know that axolotls are often happy when they are healthy, it is still crucial to understand what a happy axolotl looks like.

Your axolotl is probably content if they appear to be swimming around and able to move their gills freely without any curling or tension.

Particularly when they appear to be in good health, accept food readily, and approach you when you approach their tank.

Your axolotl is probably still in contempt, even though it appears that they might be unmotivated or bored.

They don’t mind sitting around doing nothing at all; on some days, they might even prefer it.

How to Keep Them Happy

You can do plenty of things to make them happier, including giving them high-quality food, especially a good variety of it.

You can think about purchasing some frozen food or canned cat food to consider giving to them as rewards.

Even better, you may feed them blood worms, which are often a favorite food of axolotls.

Always maintain proper water quality and ensure all parameters are accurate if you want to prevent unusual behaviors or potential diseases.

After all, a healthy axolotl is a happy axolotl.

The fact that touching or handling them in any manner puts them under a lot of stress makes it even more important to avoid doing so.

If you do it regularly, it may potentially make them sick or perhaps kill them.

As a rule, physical contact will make them upset rather than pleased, so it is advisable to keep providing them with food inside their tanks.

Making sure no lights are shining on your axolotl can also help you keep them happy.

It can irritate them over time since they lack eyelids to filter it out.

Keeping their tank clean and well-maintained will also help to create a comfortable atmosphere for the fish.

You can probably see how axolotls only have a small variety of emotions due to their lack of intelligence after going through the four basic emotions.

Although there is some evidence to support it, it might be challenging to identify their underlying feelings.

The key is to constantly keep in mind that a happy axolotl is a healthy one, regardless of the cause—whether it’s excessive stress that causes fear or a potential sickness misdiagnosed as a kind of depression.

Whether they have complex emotions or not, it’s crucial to ensure their respect and health by giving them the proper care and engaging in safe interactions.