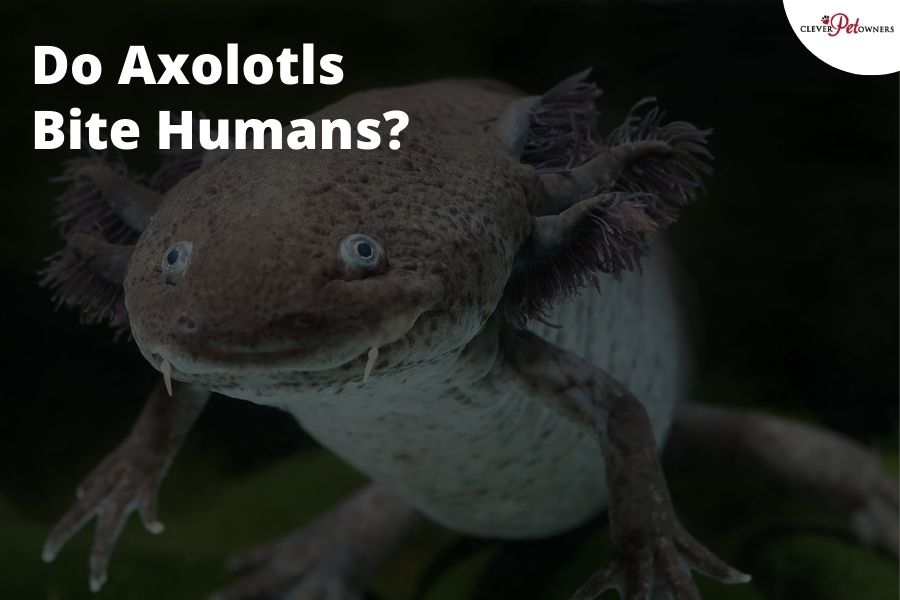 Even though axolotls appear funny, cute, and squishy on all your favorite YouTube videos and TikTok’s, their mouths are lined with a bunch of tiny little teeth.

To some people’s surprise, axolotls do bite, but you most likely won’t feel a single thing.

If you’re still worried about your axolotl possibly biting you, make sure that you continue reading to learn more about their bites and how you might be able to possibly prevent them.

Contents
I) Why do Axolotls Bite?
II) Does It Hurt?
III) Do you have to Treat a Bite?
IV) Prevention

Why do Axolotls Bite?

Axolotls will naturally try to bite at anything that’s moving, as this is just a part of their natural hunting instinct.

This instinct often leads to many mistakes, such as trying to bite your hand thinking it is food, as their eyes just aren’t near as advanced as ours, and they go more off movement than just their sight alone when hunting.

While this technique normally works quite well when they’re searching for food in the wild, it’s not really great when you’re trying to do something within the tank.

Thinking that your hand is food is also the number one most likely reason why they might mistakenly bite you, so it’s generally nothing close to a planned attack.

Like most creatures, if your axolotl feels threatened by anything, it will bite to defend itself or if it’s possibly stressed out from other nippy tank mates.

If the nippy axolotl is larger and is causing stress, make sure to remove them to avoid them from possibly cannibalizing or injuring smaller axolotls.

If incorrect care is involved, this will also generally increase their overall stress levels, making them even more likely to bite you if they’re on edge or bothered.

Make sure to try and lower or eliminate all of their stressors to keep them happier and friendlier towards you and other axolotls in the tank.

If you believe your axolotl’s stress is possibly caused by one of his nippy tank mates, make sure to reference “What You Should Do If They’re Biting Other Axolotls” at the bottom of the page to find out what you should do to try and prevent this issue.

Because of their lack of eyesight, your axolotl’s hunger may encourage attempts to taste your hand since they don’t know any better and are acting on instinct, especially when hungry.

The evenings are their usual feeding or hunting times, so it’s usually a good idea to avoid having your fingers in the tank around that time.

Especially if your axolotl generally eats live food, it will most likely try to strike your hand, mistaking it as food after seeing its movement within its tank.

I would avoid putting your hands in their tank during their usual feeding times, or if they haven’t eaten in a while, as a wriggling finger will resemble a wriggling worm to them due to their lack of proper eyesight.

By keeping up on the times they’re most likely to bite, you may be able to avoid them accidentally biting you.

To Some People’s Surprise, No.

Most people claim that axolotl bites are just plain uncomfortable and might frighten you the first few times just because of the weird sandpaper-like feeling it causes when it does decide to bite unexpectedly.

There’s generally no pain associated with their bites and usually no bleeding to follow, making any possible bite you may receive easy to handle.

So generally, there’s nothing to be afraid of when it comes to your pet axolotl trying to bite you.

Why Doesn’t It Hurt?

While axolotls have small teeth lining their mouths, they aren’t sharp or even hard.

This is why their small teeth can’t usually even get through human skin, because their teeth are surprisingly more like rubber rather than hard bone.

This is why their bites have a sandpaper sensation instead of the feeling of individual teeth poking you when you get bitten.

There will always be a possibility of slight bleeding in some cases of a bite, but it’s very unlikely to happen.

Axolotls are usually amiable and social creatures and are even known to enjoy playing and even interacting with humans.

They also generally aren’t known for attacking humans for any reason, as they usually always only harm their human owners on accident, thinking their hand is food unless you actually did something to scare them.

You never have to worry about your axolotl being out to get you or even hating you, as they generally just don’t know any better.

Axolotl bites generally aren’t dangerous even in the slightest bit. This species is entirely non-venomous, and there’s seriously not much to worry about in terms of dangerousness.

All types of transferable human diseases from axolotls are rare and extremely uncommon to get. Generally speaking, Salmonella germs are the only thing you’ll have to worry about as axolotls are known to be carriers of it.

Do you have to Treat a Bite?

Generally, you’ll never find yourself treating an axolotl bite, as they can rarely get through the skin. If you’re not bleeding, then treatment will generally not be necessary.

When the bite breaks through your skin, it opens up the chance for infection, especially if your hand is fresh out of its aquarium following the bite, assuming that’s where you were bitten.

Make sure to clean and bandage your wounds properly if you’re slightly bleeding, even if it’s small.

Is A Serious Injury Possible?

A serious injury is almost impossible, so you should honestly have nothing to worry about. You might experience a bit of slight bleeding, but that’s going to be the extent of it.

Try to ensure that you properly clean your wound right away, so you won’t have any type of problems with an infection later on.

You can also avoid putting your hand back into the aquarium so you don’t possibly introduce new germs to your injury.

Your axolotl is more at risk of a severe injury than you are, which may be surprising. Though it might be hard to do the first few times, try to be gentle when removing your hand or finger from their mouths when bitten.

Pulling away too hard and fast can seriously injure your axolotl by damaging their small teeth with the force of you pulling your finger out of its grasp.

You’ll rarely need professional treatment from a physician unless you’re concerned about a possible infection or the possibility of having contracted Salmonella from your wound through your axolotl.

Make sure to talk to your doctor or set an appointment to see them if you show signs of these possible problems, and seek professional treatment, as an infection may become worse and become increasingly serious if not treated properly.

The preventability of their biting is slim to nothing in reality, as even tame and friendly axolotls will tend to bite you on accident.

Because it’s so hard for them to realize it’s your hand or finger, the main way to avoid it, and also the easiest, is to keep your hand out of the tank.

Since you’re able to care for them most of the time without having your hand go into the tank, by taking this easy precautionary measure, you’ll never have to tolerate their bites again.

While this might not work for everyone, it’s up to the individual and their comfort levels.

Can You Train Them Not to Bite?

You can’t exactly train them not to bite you. This may be disappointing to those hoping to avoid it.

But you can at least dissociate your hand from feeding time by always using a pair of blunt forceps when feeding your axolotl.

By doing this, you can hope that they will somewhat learn that food comes with blunt forceps and not when your hand is present within the tank.

This will also hopefully help eliminate some of the possible confusion for your axolotl, so they’ll hopefully be slightly less likely to go for your hand thinking it’s food.

Though this might not do anything for certain axolotls who go for a bite at any sight of movement, as long as you keep things consistent, it should have a small impact.

What You Should Do If They’re Biting Other Axolotls

If your axolotl is biting any other axolotls in the tank, make sure you transfer them and any other nippy axolotls to their own solitary tanks to avoid causing injury and stress to others, even if it seems like a lot of work.

This is especially true if they’re larger than the rest of the others because they might be trying to cannibalize the smaller axolotls in the tank.

Make sure to keep an eye on the behavior of your axolotls, to make sure they’re maintaining friendly boundaries with each other, and to take action when needed to separate the nippy ones.

Remember to avoid keeping different-sized axolotls together to prevent cannibalization. As mentioned earlier, the larger ones will almost always try to attack and eat smaller ones, which will also stress out the smaller axolotls in the tank.

Do Axolotls Have Emotions?