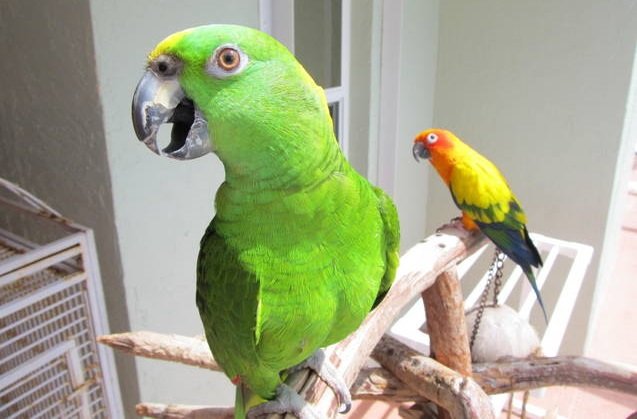 Perhaps you told someone at work that you have a conure, and they immediately asked if you’d be interested in a “bigger parrot” their cousin doesn’t want anymore. Or perhaps getting another parrot has been a part of the plan ever since you fell in love with your first.

You have an Amazon, you’d like to get it a companion, and conures have always fascinated you—or vice versa. Amazons and conures are among the most popular pet birds, so you are not alone in asking this all-important question: do Amazon parrots and conures get along?

The short answer is yes. Parrots are flock birds and tend to be happiest when they share their world with feathered friends. Although different species would not usually intermingle in nature, they often learn to accept one another in captivity.

However, parrots can also be territorial or moody, and the size difference between Amazons and conures demands precautions like separate cages and supervised playtime.

Why do Amazons and Conures Get Along so Well?

They love company. Sure, they can become attached to humans and even accept them as a surrogate flock, but nothing makes up for the company of another bird. In nature, birds tend to stay with their own kind, but many close, unlikely friendships have formed between different species in captivity.

They are both members of a psittacine group known as “New World Parrots,” a group that also includes macaws, caiques, Quaker parakeets, and parrotlets. All of them are native to parts of South and Central America. Amazons and conures in the wild would share a similar habitat and lifestyle, foraging for seeds, nuts, fruit, and greens and interacting with flock mates.

They can be quite similar in personalities and energy levels. Of course, every individual bird is different. Some conures may be shy, and some Amazon’s may be quiet. Typically, however, both parrots tend to be outgoing, cheerful, playful, and interactive. Neither is likely to completely overwhelm the other, making them a better combination than, say, an African grey and a caique.

Amazons and conures also tend to be less clingy than some species, such as cockatoos. A well-adapted Amazon or conure can learn to entertain itself and enjoy some independent play, allowing you to spend one-on-one time with each bird.

They can be similar in size. While the difference between a green check and a blue-fronted Amazon is noticeable (and should always be taken into consideration, as discussed below), some of the large conure breeds are only slightly smaller than an Amazon parrot.

This comparability may allow the birds to accept one another more quickly. Although you should always be present when they are out together, you also won’t need to be as concerned that one will hurt the other in the event of a scuffle.

When Should Amazons and Conures Not be Mixed?

There are a few situations in which Amazons and conures should not be mixed.

Interesting READ  Why Does My Canary Make Clicking Noises?

Be aware that your home will always be a somewhat unnatural environment for parrots. There is much less space for parrots to get away from each other and establish territory than there would be in the open forests of South America. The bird’s flock has been chosen for it rather than being its natural family. It’s up to you to make up for these shortcomings and ensure everyone is safe and getting along.

How Can You Successfully Mix Amazons and Conures?

Whenever you bring a parrot home, it’s best to schedule a checkup with a certified avian vet. If you have other birds, you should also keep the newcomer quarantined in a separate part of the house for several weeks.

This will allow the bird to become comfortable with you and ensure that no diseases are introduced to your existing flock. When it comes time to introduce your Amazon and conure, there are a few tips you can follow to start their friendship off on the right foot.

Introduce them in a neutral area

It’s a good idea to start by moving your new bird’s cage into the same room as your existing bird and placing it a short distance away. Allow them to get accustomed to each other’s presence for a few days.

When you eventually let them out together, don’t place them on the same perch or on either of the cages. Choose a neutral space with plenty of room for them to get away from each other – like a tabletop or bird tree – and be prepared to nip any aggression in the bud.

The difference in size and personality may come into play here. A small conure like a green cheek may be completely overwhelmed by a larger blue-fronted Amazon.

Or the opposite may be true, and a small conure with an I-can-take-anything personality may decide that a direct attack is the best way to establish contact with this potential enemy. Pay close attention to your birds’ body language to be sure neither one is feeling threatened.

Remember, your birds will likely be looking to you to set the flock dynamic. Make sure you are communicating a calm, confident mental state. Make each interaction with both birds as positive as possible. This may involve directing their attention to various toys or asking for tricks if you have trained any.

Offer each bird a treat and allow them to enjoy it in each other’s presence but without competition. Sharing snack time can be a great bonding experience.

Opinions vary on whether pet parrots should be fully flighted. However, the prevailing advice from experts in the past several years has been that parrots are most happy, healthy, and well-adjusted if they are allowed and taught to fly instead of having their wings clipped.

This can be especially helpful when it comes to keeping two birds. Freedom of flight will allow your parrots to get away from each other if one should become too pushy, reducing the chance of a serious fight or injury.

As was stated before, you should always be present when your birds are free to interact with one another. Make sure both birds receive an equal amount of attention from you and that neither treats you like his personal property or mate. This will reduce friction and significantly increase your success in mixing multiple birds and species.

Interesting READ  What Fruits and Vegetables can Conures Eat?

What Should You do About Amazons and Conures that Refuse to Get Along?

Having your pets become good friends is, of course, ideal. However, this doesn’t always happen. Occasionally there will be two birds who will simply refuse to get along. If this becomes the case with your Amazon and conure, don’t push it.

Generally, even Amazons and conures that never become friends will not constantly be actively aggressive towards one another. In this case, you can simply let them play in separate areas and keep an extra close eye on them when you are all sitting on the couch together.

If one of your birds is aggressive toward the other, the only way to achieve harmony may be to let the birds out one at a time or have play stands on opposite sides of the room for them. Do all you can to figure out the underlying issue and deal with it, but never put your birds in a situation where they may fight or bully each other.

How Can You Ensure Lasting Harmony Between Your Amazon and Conure?

Basic training and even trick training are great ways to direct your parrots’ energy, strengthen your bond with them, and increase their tolerance of each other. Parrots are intelligent, playful creatures that love to interact.

Teaching them to step up and down on command is an essential that every bird should learn. This will allow you to move them from place to place quickly and easily, which is especially important when dealing with multiple birds. Especially territorial birds can be trained to move to a specific perch while you open their cage or fill their food dish.

Parrots that just enjoy being ornery and stirring up excitement can be taught to free fly indoors. They can be taught to toss a ball, spin around, wave, or find treats hidden in a foraging toy. Singing along or dancing to music is another activity most parrots love to do with their humans and each other.

Make every interaction with your birds as positive as possible. This means maintaining a calm, friendly approach at all times and giving them space when they ask for it. It means being unfailingly kind and never losing your patience or trying to take a shortcut when it comes to communication, safety, or care.

Remember that once your birds have been successfully integrated, they will see you, your family, and each other as part of their flock. Each member of the flock is capable of affecting the entire flock’s dynamic.

If your birds have been getting along fine and suddenly start getting snippy with each other, stop and take stock. Have you been feeling or acting more stressed lately? Has there been any sudden change in your routine or surroundings? Are both of your birds healthy and happy? Have you failed to spend enough quality time with them lately? Is it possible that hormones are in play, and they need extra space right now?

Amazon parrots and conures are amazing, exciting, and demanding pets. A life shared with them is frequently noisy and never dull. They can be grumpy, impatient, and demanding, and they can be hilarious, cheerful, and affectionate.

You’ll find that at times they can push you to your wit’s end, and at others, they will be the brightest ray of sunshine in your life. Make sure you are committed to a lifetime of continuing to learn and care about these incredible creatures.

And don’t forget to enjoy them thoroughly! Happy parrots are most often found in happy homes. When interacting with your birds, your happiness and gentleness are most likely to encourage them to interact happily and gently with you and each other.

Why is My Canary Sitting on The Bottom of The Cage?

Why Is My Parrot Biting Me All Of A Sudden?

How Much Sleep Do Birds Need? 7 Burning Questions Solved!